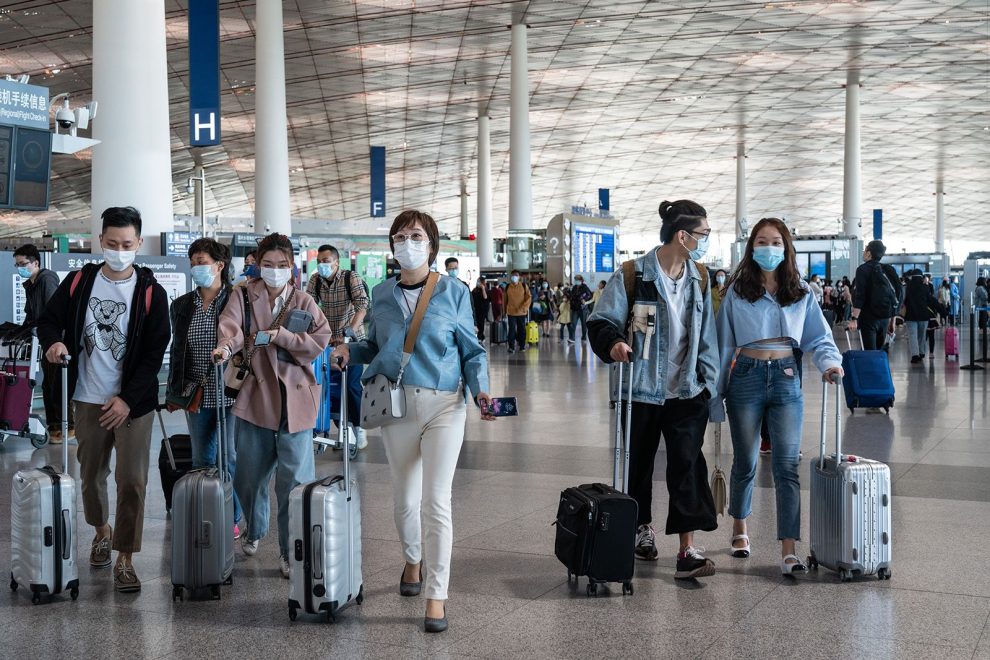 Starting Jan. 5 at 12:01 a.m. ET, all passengers from China who are 2 years old and older will need to receive a negative PCR or antigen self-test no more than 2 days before their departure from China, Hong Kong or Macau, per the CDC.

The CDC said it is mainly concerned about slowing the spread of COVID-19 in the U.S.

The agency also wants to prevent any variants of concern from leaking into the country.

Is the Biden administration xenophopbic for singling out the Chinese travelers?

The CDC said the lack of accurate data will make it more difficult for federal health officials to identify variants of concern if they arise.

Given that, Kyle Bass makes a good point:

How about submit to a U.S. administered COVID test when they land? Our country can’t rely on Chinese test results. #China

As we detailed earlier, Bloomberg reports that Italian health authorities will begin testing all arrivals from China for Covid after almost half of the passengers on two flights to Milan were found to have the virus.

Additionally, in Germany, health authorities are “closely watching” the situation in China, according to Health Ministry spokesman Sebastian Guelde.

China’s National Health Commission announced on Dec. 26 that the country would end all quarantine requirements for inbound travelers from Jan. 8, 2023.

Travelers will need to obtain a negative PCR test within 48 hours of departure, it said. Currently, travelers entering China need to undergo five days of mandatory quarantine in an approved facility, followed by three days at home.

The health body added that outbound tourism, which plummeted to almost nothing during the pandemic, will resume in an “orderly” fashion.

It also removed the cap on the number of international flights to and from China.

Crucially for the rest of the world, as The Epoch Times reports, data from travel sites show that Chinese residents are rushing to book overseas trips.

Chinese travel platform Tongcheng Travel released data on Dec. 27, showing that the number of searches for visas to go abroad increased by 10 times, and the search volume of international air tickets soared by 850 percent.

Japan, Thailand, South Korea, the United States, Singapore, Malaysia, Australia, and the UK were among the most searched destinations.

Sean Lin, a virologist and former lab director at the viral disease branch of the Walter Reed Army Institute of Research, said that the Chinese Communist Party’s (CCP) opening up of the country is actually a strategy to get everyone infected not only within China, but around the world.

“When they can’t control the outbreak, they push it to the whole world. Just like when COVID first broke out in Wuhan, people who had been infected in Wuhan were allowed to travel around the world. The strategy is the same now as before,” he said.

Lin pointed to the regime’s lack of transparency amid the latest outbreak, a consistent behavior over the past three years during the pandemic.

“The CCP is not sharing data, and the international community doesn’t know how many different virus variants are spreading in China, and whether there are other compound infections,” he said.

“Under such circumstances, it is extremely irresponsible for the CCP to let the people out of the country which is a huge epidemic area. Put another way, it has a very treacherous purpose and is very malicious.”

Bloomberg notes that Italy is now sequencing those tests to see if there are new variants coming from China, the Health Ministry said in a statement. If a new strain is found, officials may impose stricter curbs on travel from China.

“We have no indication that a more dangerous mutation has developed in China that would give rise to a declaration of a virus variant area, which would result in corresponding travel restrictions,” he added.

Finally, the critical question for the world’s liberal globalists – will it be xenophobic again to block Chinese visitors?