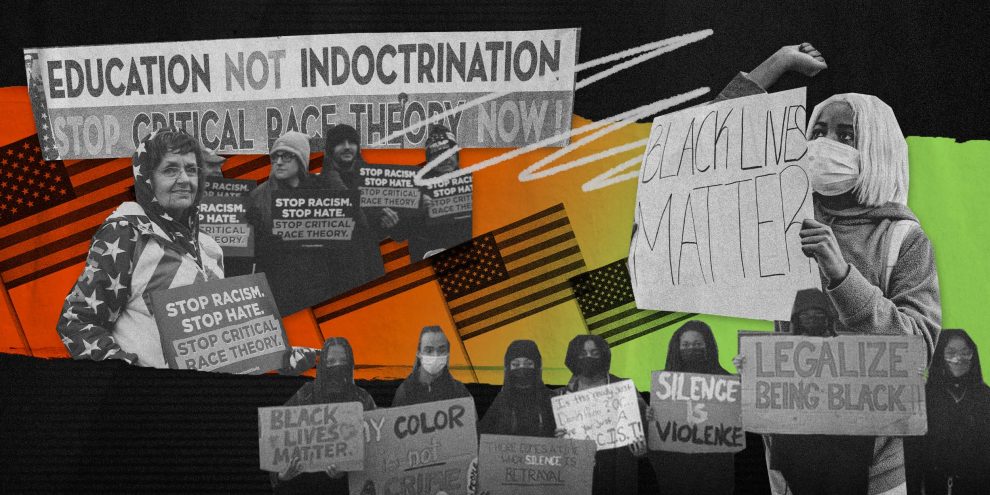 College — it’s a place of guidance. And for those attending California State University, Fullerton, a plastered poster is lighting the way.

If you’ve not been categorizing people by identity groups, the school makes clear you’ve missed the mark.

“CHEMISTRY LAB,” she repeated in all caps.

This social justice poster was hanging up in my chemistry lab…CHEMISTRY LAB pic.twitter.com/rvb8Z2mFBb

Create a campus community that is committed to the achievement of equitable outcomes for all students, with particular emphasis on assessing and incentivizing the closure of opportunity gaps for students from historically racially marginalized groups. Ensure faculty have the requisite tools and skills to facilitate equitable learning.

Redouble efforts across the institution to successfully recruit, retain, and graduate students from underserved communities, with a specific emphasis on Black/African American and Native American/Indigenous Titans.

The college intends to end racism by grouping people by race. Such will “radiate…inclusion”:

Amplify Our HSI Designation & Radiate an Identity of Inclusion – Ensure our identity as a multiethnic, multiracial, and multicultural institution that is committed to a future free of racism and bias is clearly articulated and visible to everyone — internally and externally. This includes our designation as a Hispanic Serving Institution (HSI) and our eligibility for designation as an Asian American and Native American Pacific Islander Serving Institution (AANAPISI).

Beyond those, Cal State Fullerton will ensure more “underrepresented racial and ethnic communities” register for school. Furthermore, it instructs all students to “recognize and call out structural racism.”

Lastly, the school promises to “create an antiracist community,” which is to say, a community which emphasizes race.

After all, as stated by CNN, “antiracism” seeks to maim microaggressions such as the following:

Clearly, CSUF colossally cares. It cares so much, reportedly, it’s placed papers all over campus encouraging all to view one another according to race.

The school identically repeats the poster’s points on its website.

Via the same page, it claims the last year has been woefully white supremacist:

This past year has exposed raw layers of injustice; systemic inequities, biases, and racism that are the lived and daily experiences of too many of our colleagues and students. As a nation, we have been fully awakened to anti-Blackness in our society — from police violence and attacks on peaceful protestors, to a white nationalist insurrection in our Capitol. This occurred during a global pandemic that not only disproportionately affected the health of Black and Brown communities, but also triggered anti-Asian hate and violence. Such incidents insist that we intensify and accelerate our efforts to dismantle structural oppression and interrupt patterns of individual and collective behavior in and around our nation.

“First,” the university asserts, “we must complete this work at home.”

As for structural racism, it’s a peculiar thing: Institutions have, of late, rampantly claimed there is racism embedded into America’s systems. Frustratingly, however, they appear to have so far refused to pinpoint such. If only they would reveal it, the malady could immediately be removed.

To be an actively inclusive, equitable, and anti-racist campus, we must engage in transformative intersectional work with, among and between the various communities that are consistently relegated to the margins of our society. We cannot separate the conversation between racial justice and justice for all marginalized groups when the oppression and liberation are interconnected. Instead, we must step back, examine, and discuss the historic parallels of racial justice and other human rights movements, such as the immigration and LGBTQ+ movements.

To that end, it will “embed anti-racist and non-discriminatory behaviors and structures within the core of the [school] experience.”

Will emphasizing differences annihilate discrimination? If so, what an innovative victory it will be.

In the meantime, it seems, CSUF students can look forward to antiracist chemistry.

So goes our academic evolution.