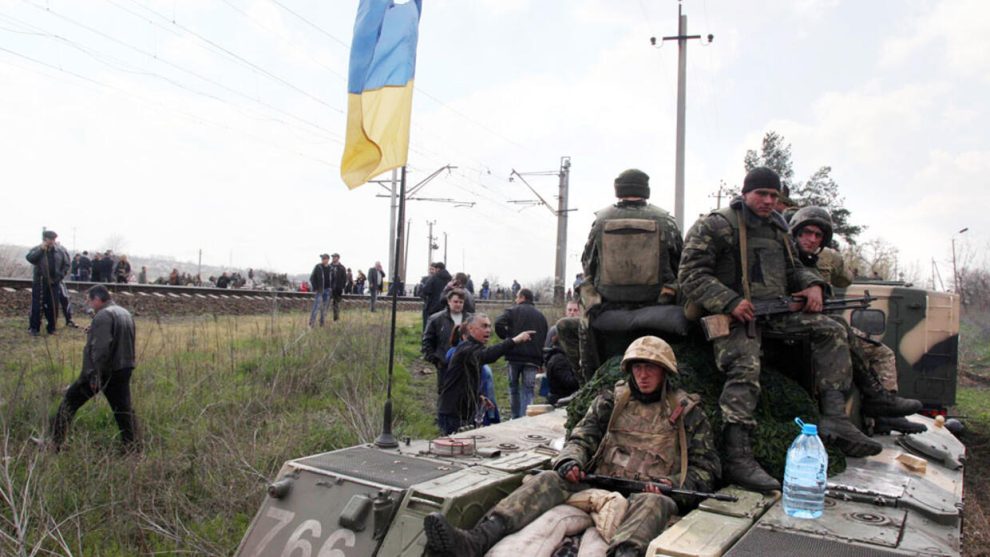 Saturday, I posted on the new Ukrainian offensive in Kharkiv Oblast that has liberated several hundred square miles of territory and threatens to unravel the entire Russian invasion; see Russia’s Disaster in Kharkiv Turns Into an Avalanche of Failure as Ukraine’s Army Advances Without Opposition.

The main effort in yesterday’s report was Kupiansk, a critical rail and highway node on the Oskil river. That city is firmly in Ukrainian hands. As I noted yesterday, this places the main railroad line from Russian forces in Ukraine to Russia within range of Ukrainian tube artillery.

The Ukrainian offensive in Kharkiv Oblast shows some signs of slowing down, unlike the Russian withdrawal.

Russian Army currently experiencing in Ukraine its "2015 Idlib moment", when SAA was routed in Idlib & lost entire province.
Russia then launched its military intervention in Syria to prevent Assad's collapse.
Watch until the end👇 pic.twitter.com/xswdMqZa9V

Luhansk Region Surroundings of Starobilsk. The Russians are fleeing towards Luhansk.#RussianArmy pic.twitter.com/wp8IKwTBIL

Video of combat between Ukrainian and Russian soldiers.

The Ukrainian soldier filming says “oh how many of them have I killed today”. pic.twitter.com/oskqaTou5o

But progress continues. I’d thought the Oskil River/reservoir running south from Kupiansk might mark a line of advance for this phase of the operation. New reports indicate the Ukrainians have vaulted the Oskil River and are in hot pursuit of the fleeing Russians with the possibility of re-conquering the fake Luhansk People’s Republic created by the Russians in 2014.

– General Staff of the Armed Forces of Ukraine reports. pic.twitter.com/U25mP26f2V

Ukraine being able to bounce the recapture of occupied Northern Luhansk from the march is looking more likely.🤔 https://t.co/IDwhXPNctl

In the north, Ukraine has successfully reestablished control of all of its territory up to its border with Russia.

In my post yesterday, I mentioned that the Russian military in the town of Vovchansk had announced it was withdrawing. There are credible reports that the opposing armies negotiated the evacuation of Vovchansk and neighboring towns. According to the ISW/Critical Threats interactive map, this is what the frontline looks like today.

The Kharkiv front. Ukraine has reestablished control of most of its territory on the border with Russia. Via @criticalthreats and @TheStudyofWar https://t.co/5pKWZaUiVK pic.twitter.com/sLGDGlQMcC

The Ukrainians have not advanced on the border crossing point between Pisky (UKR) and Logachevka (RUS), which is basically where the rightmost part of the blue-shaded area touches the Russian border. My guess is that they have no interest in stopping the flight of pro-Russian residents. It also looks like the Russians aren’t crazy about admitting them.

🇷🇺🇺🇦 Queues at the Logachevka checkpoint from those wishing to leave the Kharkov region for Russia. pic.twitter.com/A7rdyR9cPM

"There are over 400-500 cars in the queue and around 200 people on foot." pic.twitter.com/hGjBPocDMP

Video at the broder town of Logachevka with pro-RU civilians/refugees setting up camps with what looks like 🇷🇺 EMERCOM assitance. https://t.co/oREg0xseoO

There are mixed calls on the town of Lyman; see my report from yesterday for the location; my assessment is that the calls of “contested’ are overly conservative. I think Lyman has fallen, but I also understand the imperative of being right on calls for Ukrainian advances.

The Donetsk front had some action. Indications are that the quality of Russian forces working there may be of higher quality than those routed over the last week. A Ukrainian mechanized platoon attempted a hasty attack without artillery support about 12 miles northwest of the city of Donetsk and got mauled for their efforts, losing two T-72 tanks.

Ukraine lost 2 tanks in an attack on Pisky.

If drones with cameras would have been around during WW2, this is what they would have recorded. pic.twitter.com/LGub2iPO3b

The Kherson offensive continues to grind out a few kilometers daily, despite what Putin’s mouthpieces say.

Zelensky’s counterattack on Kherson and Nikolaev has been a complete disaster. Total defeat for the Ukrainian side.

The Russians have voluntarily withdrawn some distance on the western side of this sector; the assumption is that they are bringing their troops within supporting range of artillery on the south side of the Dnieper River.

That could be, and it could also be that the Russians are withdrawing across the Dnieper—remember, all the bridges across that river are destroyed, and the only way to cross is by pontoon raft—and this requires shortening defensive lines. As much as giving up Kherson would be embarrassing, evacuating that city and everything north of the river would be a very astute operational move. Russia moved about 20,000 troops from Kharkiv and Donetsk across the Dnieper to confront the much-ballyhooed offensive. I’m pretty sure they’d like them back.

An intriguing story is bouncing around that the Russians and Ukrainians are negotiating the evacuation of Kherson.

“According to our information, from the evening of September 9, the command of the Russian Armed Forces grouping in the Kherson region began to negotiate with the command ‘South’ of the Armed Forces of Ukraine on leaving the occupied…” — 😼👇https://t.co/wfKZbCaE9t

That could explain the relative passivity of the Kherson front and the slow compression of Russian lines. The Ukrainians might very well calculate that liberating Ukrainian territory, including Kherson City, without a fight might be worth the cost of letting 20,000 Russian troops pass through a “humanitarian corridor.”

There are major politico-military issues brewing.

If Ukraine, as seems inevitable, moves into the territory claimed by the Potemkin republics created by Russia in 2014, then the character of the war changes dramatically on the ground. In that case, the ground war objectives would come more congruent with the stated position of the Ukrainian government that they intend to reclaim Luhansk and Donetsk. It also means the “Special Military Operation” fiction maintained by the Kremlin is no longer viable.

While Russia was unable to carry out a single missile attack or airstrike on the Ukrainian offensive in Kherson, they have continued to carry out what can only be called terror attacks on civilian targets far removed from the battlefield. The city of Kharkiv is hit daily by rocket attacks from across the Russian border. I believe Ukraine has been constrained in its ability to retaliate because I’ve been told that one of the terms of receiving HIMARS and MLRS was that they would not hit targets inside Russia. The new northern border places Belgorod and other cities within the 30-mile range of the 203mm 2S7 “Pion” self-propelled guns operated by Ukraine. Any agreement with a Western nation does not govern these weapons. It is difficult to see how the Ukrainian government continues to allow attacks from Russia without retaliation.

The successful offensive makes it less likely that Ukraine will be interested in negotiating. As a result, president Zelensky’s hard line (Ukraine President Zelensky Sets His Terms to End Russia’s Aggression in Ukraine and Vladimir Putin Isn’t Laughing) got a lot harder.

Ukraine showing that it can wage a successful offensive campaign makes it much more likely that modern tanks and aircraft may be on the way.

The U.S. is now thinking about supplying Ukraine with Western tanks and IFVs.

This would be a crucial step that would strongly contribute to Ukraine winning the war.

The next week promises to be just as exciting as this one.