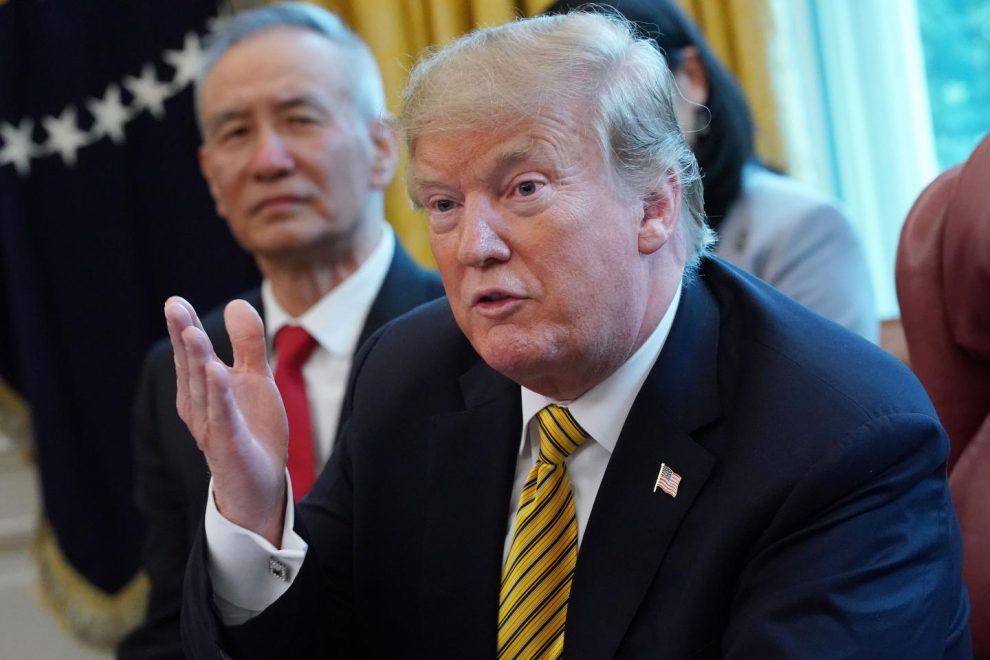 The United States and China ended a session of trade talks Friday without an announcement of an agreement, hours after new tariff hikes took effect and President Donald Trump threatened new ones.

The latest talks were “constructive,” Treasury Secretary Steve Mnuchin told reporters, but he did not provide details.

“Talks with China continue in a very congenial manner – there is absolutely no need to rush,” Trump said in an early morning series of tweets sent just hours after new tariffs took effect.

Global markets have dropped throughout the week, as investors feared new U.S. tariffs and Chinese retaliatory tariffs will raise prices for consumers and slow the global economy. The Dow Jones Industrial Average was down 1% on Friday at midday but trimmed its losses a bit after Mnuchin’s statement.

While Trump claimed that “tariffs will bring in FAR MORE wealth to our country than even a phenomenal deal of the traditional kind,” markets analysts noted that China will retaliate by increasing tariffs on U.S. goods.

The results, they said, will be higher prices for consumers, perhaps less trade between the world’s two largest economies, and more complicated negotiations on a new trade agreement.

New U.S. tariffs on $200 billion in Chinese goods went into effect at 12:01 a.m. on Friday, after the two sides were unable to nail down the details of a new trade agreement during talks on Thursday.

Rates jumped to 25% from 10% on a massive range of Chinese goods, including office furniture, handbags and frozen catfish fillets.

Trump met Thursday night with Treasury Secretary Steven Mnuchin and U.S. Trade Representative Robert Lighthizer, and they agreed to “continue discussions” on Friday with the Chinese, the White House.

Trump has expressed both optimism and pessimism about a new trade deal in the run-up to the Friday deadline, roiling markets as investors tried to parse the president’s words and assess whether he was serious about raising the tariffs.

Trump announced Sunday on Twitter that he intended to increase tariffs on $200 billion in Chinese goods and impose new levies on another $350 billion in imports because he was angry about the pace of the talks and at what he said was China’s attempts at backtracking on several commitments it had made during months of negotiations.

The threat came after Trump and his top economic advisers had said for weeks that talks with China were progressing and that a deal was imminent. As late as Thursday afternoon – hours before Chinese Vice Premier Liu He met with his counterparts in Washington – Trump signaled that a deal with Beijing remained within reach.

Speaking to reporters at the White House midday Thursday, Trump indicated he was ready to move forward with the new tariffs. But he also said he had received a “beautiful letter” from Chinese President Xi Jinping and would likely speak to him about the negotiations.

“We were getting very close to a deal and then they started renegotiating the deal,” Trump said. “He just wrote me a beautiful letter. I just received it.”

China has denied that it is attempting to renege on its commitments and threatened to retaliate with tariffs on unspecified U.S. products if Trump followed through with new tariffs. It said Trump’s threats were needlessly stressing world markets.

U.S. farmers and business leaders urged Trump not to go forward with the tariffs, warning they could result in up to 2.1 million job losses over the next three years.

Trump, who ran for president in part on a promise to renegotiate U.S. trade agreements, has made threats to raise the Chinese tariffs to 25% twice before, and then blinked at the last minute. Trump cited “substantial progress” in late February when he pushed back a March 1 deadline to reach an agreement or impose higher duties.

This time, the tariff increase went through.