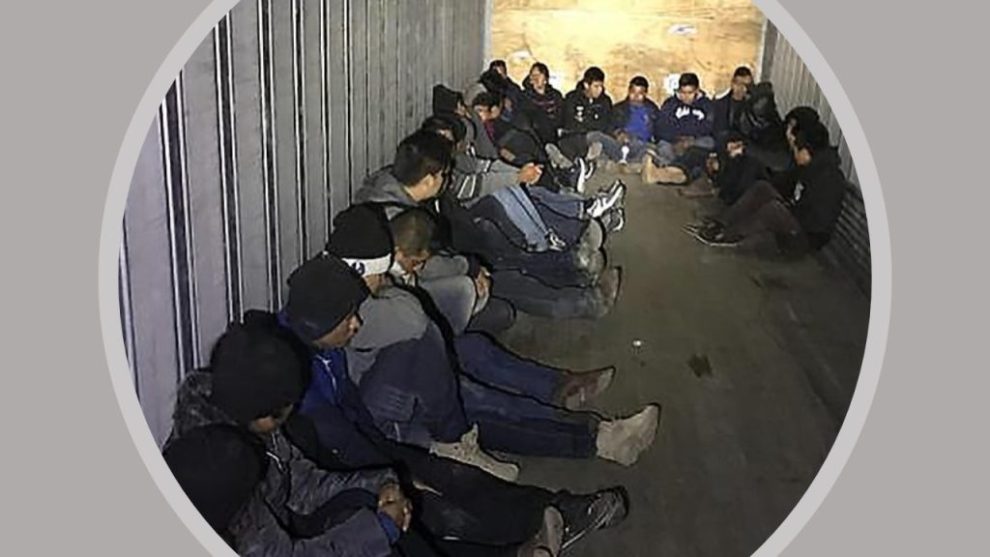 President Joe Biden’s border with Mexico is the deadliest land crossing in the world, according to a United Nations group, the International Organization for Migration.

“More than 1,238 lives have been lost during migration in the [north, central and south] Americas in 2021, among them at least 51 children,” said the group’s July 1 report.

“At least 728 of these deaths occurred on the United States-Mexico border crossing, making this the deadliest land crossing in the world,” said the IOM statement, which added:

“The number of deaths on the United States-Mexico border last year is significantly higher than in any year prior, even before COVID-19,” said Edwin Viales, author of the new IOM report on migrants in the Americas in 2021. “Yet, this number remains an undercount.”

The record number of deaths reflects the mass migration up to the border — where Biden’s border chief, Alejandro Mayorkas, is dangling work permits and jobs to more than a million foreigners.

In 2020, one-third fewer people died throughout North, Central, and South America when President Donald Trump rejected illegal migration, according to the report’s data.

Yet during that low-migration and low-death year, many liberal and business-aligned pro-migration groups loudly protested Trump’s life-saving opposition to illegal migration. These groups also complained that Trump was temporarily separating children from their families, unlike the 51 recorded permanent separations in 2021.

The IOM is a pro-migration group complete with the motto, “Making Migration Work for All.” So the IOM is using the June 27 death of 53 migrants in a San Antonio truck to demand that the U.S. government welcome yet more economic migrants with no regard for the huge cost imposed on Americans and people in migrant-sending countries.

The 53 victims were killed while they were using the government-protected, coyote-managed “illegal migration” track to U.S. jobs. Under Biden’s watch, the coyote-run migration track has successfully delivered roughly 2 million migrants, even as a similar number of legal immigrants and visa workers arrived via the official, government-run legal migration track.

The outsourced, coyote-run truck and the resulting deaths continue because “our [U.S.] leadership class doesn’t believe in the legitimacy of immigration law,” explained Mark Krikorian, the director of the Center for Immigration Studies.

They “tolerate mass illegality as a way of getting around the [annual] immigration limits set by Congress,” he told Breitbart News.

“Migrants dying trying to cross our southern border has been a national scandal for more than two decades,” admitted Julio Ricardo Varela, a pro-migration columnist for MSNBC. “Blaming Biden is too simple. Where was [the] outrage during the Donald Trump and George W. Bush administrations?” he wrote July 1.

The 53 dead included two teenagers from the Mexican state of Veracruz. They paid the smuggling fees with $20,000 from the sale of their mother’s house because they expected to join relatives in the United States and then repay the debt with U.S. wages, according to a July 1 report from the Associated Press:

Teófilo Valencia, father of 19-year-old Jair and 16-year-old Yovani sat looking at his phone, reading the last messages he received from them. “Dad, now we’re going to San Antonio,” Yovani wrote at 11:16 a.m. Monday. A half-hour later, his brother wrote to their father that they were ready to work hard and pay for everything.

Yet Democrats and some Republicans are also using the death of the 53 migrants to push for easier migration despite the inevitable economic and civic harm to at least 100 million blue-collar Americans.

“The border has been a challenge for decades — ultimately, Congress must pass legislation to once and for all fix our broken immigration system,” insisted border chief Mayorkas, whose pro-migration policies have caused the death of hundreds of migrants as they try to reach the work permits that he is dangling at the border.

Mayorkas defended his lax border security policies, saying, “We’ve stopped more than 400 vehicles and saved and rescued more than 10,000 migrants.” He did not whether the 10,000 migrants were sent home or released into the United States to help reduce Americans’ wages.

“I think that we are doing a good job,” Mayorkas claimed to ABC News on July 3 — less than a week after the 53 migrants died in a smuggling operation under his nose.

Mayorkas on Biden Administration Performance at Southern Border: ‘I Think that We Are Doing a Good Job‘ https://t.co/NAlrftibFz

Many other Biden migrants die at sea, on highways, in deserts, rivers, jungles, and snow as they try to get through the coyote-run unofficial obstacle course to the prize of U.S. jobs offered by Mayorkas, who is a pro-immigration zealot.

“We are at 51 deaths [so far 2022] and the summer heat is just now beginning,” Brooks County Sheriff Benny Martinez told Breitbart Texas on June 29. “With temperatures reaching in excess of 100 degrees, many [migrants] are simply not prepared for what they face when smugglers drop them off in the southern part of the county and send them on their way.”

Business-funded Republicans are also using the death of migrants to call for laws that allow easier legal immigration of wage-cutting, rent-boosting foreign consumers, renters, and workers into the jobs and housing needed by Americans.

“If we don’t take notice to 53 innocent migrants dying, then when are we going to take notice?” Rep. Tony Gonzales (R-TX) told WFAA.com, adding:

Since at least 1990, the D.C. establishment has extracted at least 40 million legal and illegal migrants, and visa workers, from poor countries to serve as workers, consumers, and renters for various U.S. investors and CEOs.

This economic strategy of Extraction Migration has no stopping point. It is brutal to ordinary Americans because it cuts their career opportunities, shrinks their salaries and wages, raises their housing costs, penalizes their children, and has shoved at least ten million American men out of the labor force.

An economy built on extraction migration has encouraged wealthy elites to shift their sympathy to grateful migrants, and away from the despairing Americans at the bottom of society who sometimes vote against the elites’ political interests. That migration-enabled betrayal of fellow citizens then alienates young people and radicalizes Americans’ democratic civic culture.

The extraction migration economic policy is hidden behind a wide variety of noble-sounding excuses and explanations. For example, progressives claim that the U.S. is a “Nation of Immigrants” that Americans have a duty to accept foreign refugees, and that the state must renew itself by replacing populations.

But the colonialism-like economic strategy also kills many migrants, exploits poor people, and splits foreign families as it extracts human-resource wealth from the poor home countries. The migration policy also minimizes shareholder pressure on companies to build up beneficial trade with poor countries.

The polls show deep and broad public opposition to labor migration and the inflow of temporary contract workers into jobs sought by young U.S. graduates.

The opposition is growing, anti-establishment, multiracial, cross-sex, non-racist, class-based, bipartisan, rational, persistent, and recognizes the solidarity that citizens owe to one another.