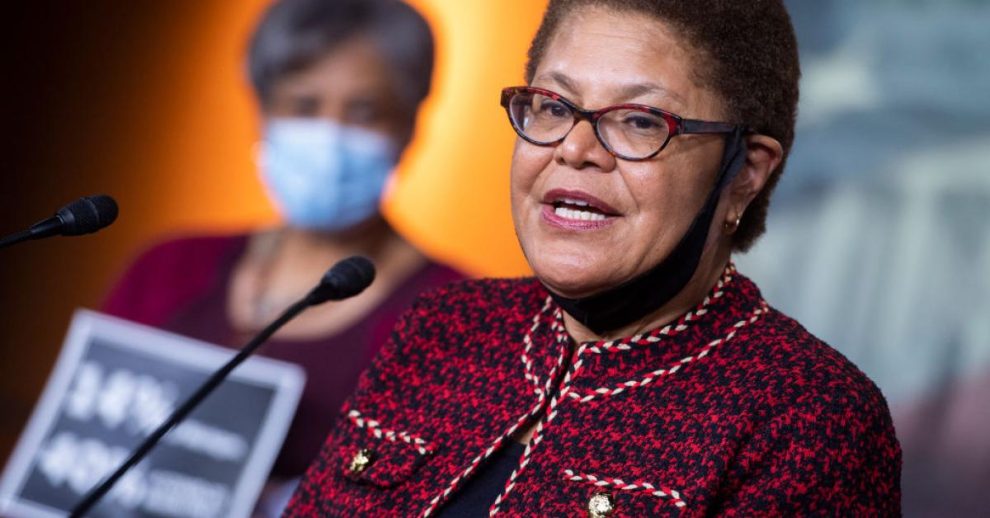 The curious case of Congresswoman and current Los Angeles mayoral candidate Karen Bass, who stated on Saturday, September 10th that a burglary took place at her home the previous day, with the only items taken being two guns, grew stranger on Wednesday, when Bass stated the Los Angeles Police Department had informed her they had arrested two suspects in the burglary. After some delay, the Department has confirmed Bass’ statement.

Bass made the comment during an interview with Los Angeles television station FOX 11 reporter Elex Michaelson.

Bass stated the guns were locked in a safe box stashed in a closet. She also stated LAPD detectives had informed her they had two suspects in custody. After the initial Department press release about the burglary mentioned only one individual, and a delay of several hours, the Department updated its release with two addendums as follows:

On September 9th, 2022, the suspects’ vehicle and license plate were identified at the residence of the victim during the commission of the criminal offense.

On September 13th, 2022, around 7:15 p.m., the vehicle was found near the area of Hazeltine Avenue and Sylvan Street. Los Angeles Police Department, Van Nuys officers observed the suspects enter the vehicle and drive away. The vehicle was stopped, and the occupants were detained and arrested without incident.

Suspect-2, 24-year-old, Juan Espinoza was arrested for 459PC-Residential Burglary. He is currently being held on no bail (Booking #6464057).

This case will be presented to the Los Angeles District Attorney’s office for filing considerations.

The following is a revision/addition to clarify the alias and real names of the suspects.

Suspect-1, 42-year-old, Patricio Munoz was arrested for 459PC-Residential Burglary (Booking #6464056). Munoz provided an alias of Matias Milito to arresting Officers and was subsequently booked under that name.

Suspect-2, 24-year-old, Juan Espinoza was arrested for 459PC-Residential Burglary (Booking #6464057). Espinoza provided an alias of Baltazar Rodriguez to arresting Officers and was subsequently booked under that name.

When asked what kind of guns she owned, Bass deflected into a mini-speech about personal safety and how she has never opposed individuals owning guns for that purpose. In 2013, Bass cosponsored House Resolution 318 which, among other proposals, urged state legislators to reject stand-your-ground laws. While one can argue that repealing stand-your-ground laws does not nullify the castle doctrine, it certainly weakens the doctrine.

Curious actions around or involving Bass are nothing new. As Jennifer Van Laar reported here on Tuesday, September 13th, Bass is being scrutinized for accepting a secret scholarship from the University of Southern California (USC), a private institution, then subsequently sponsoring legislation that would have funneled taxpayer funds to the school in the form of stipends for training social workers. As to the gun theft case, multiple questions remain unanswered, despite Michaelson asking them. What kind of guns are involved? How did the burglar or burglars know there were guns inside the presumably locked box? Why was nothing else taken? A houndstooth cap is not needed to deduce several, shall we say, peculiarities in this case.