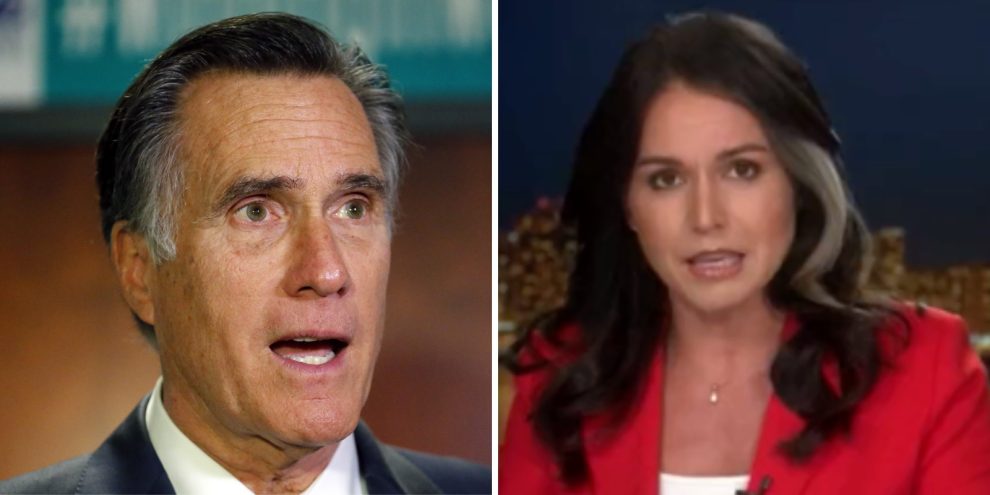 I expected Tulsi Gabbard to come back hard at Mitt Romney after the Utah senator accused her of treason, but I’m not sure I expected her to come back this hard. As RedState reported Sunday, Romney lashed out at Gabbard on social media, accusing her of repeating “Russian propaganda” and committing “treasonous” activity, a crime punishable by death.

The problem with that was two-fold. For starters, Gabbard never actually stated any Russian propaganda in the comments that set Romney off. Nowhere did she mention any conspiracy about “bio-weapons” being used by the West, for example. Instead, she expressed concern about US-funded bio-labs in Ukraine, which absolutely exist, being damaged or captured and possibly facilitating the release of pathogens. Why is that important? Because what Gabbard said is literally exactly what the Pentagon has been warning about.

Further, the use of the term “treasonous” by Romney was idiotic. Even if Gabbard were repeating Russian propaganda, and she wasn’t, it is not treason to exercise free speech in the United States. We are also not at war with Russia, which is an important aspect of accusing someone of offering aid and comfort to an enemy nation.

In short, Romney not only hysterically jumped to conclusions about what Gabbard said, putting words in her mouth, but he then took things way too far in his rush to flex his neoconservative credentials. Now, Gabbard has responded with a rhetorical gutting.

.@MittRomney, you have called me a ‘treasonous liar’ for stating the fact that “there are 25+ US-funded biolabs in Ukraine which if breached would release & spread deadly pathogens to US/world” and therefore must be secured in order to prevent new pandemics. Bizarrely, …

Gabbard starts dropping receipts from there, meticulously sourcing her statements. Here’s part of that (she gives several more examples).

#1. State Department’s Victoria Nuland acknowledged such labs containing dangerous pathogens exist in Ukraine in her testimony to the US Senate (March 8, 2022): “Ukraine has biological research facilities which, in fact we are quite concerned that Russian troops may be seeking…

Finally, Gabbard drops the mic on Romney, actually asking him to resign in what is probably a wink at the Utah senator’s decision to use ridiculously overcharged language regarding treason.

#6. Furthermore, according to the DoD there are two biolabs in Ukraine that have been under Russian control for some time: “Russia illegally took possession of two Ukrainian-owned laboratories that BTRP upgraded in 2014 and continues to deny Ukrainian access to these facilities.”

Romney isn’t going to apologize, though, because he doesn’t have the political integrity to admit he jumped to conclusions and was wrong about what was said. After all, this is the guy who hired, Steve Schmidt, a certifiably insane leftwinger, to run his 2012 campaign. Romney is also a notorious political chameleon, which is what has made the attempts to paint him as highly principled the last several years so mind-numbing.

In regards to Gabbard, she’s seen as somewhat of a quasi-ally of the Trump-right now, even though she’s still a liberal figure. That means Romney views her as a target worthy of complete scorn. That’s in stark contrast to the way the Utah senator treats mainline Democrats like Joe Biden, Nancy Pelosi, and Chuck Schumer.

Am I a Tulsi Gabbard fan? Of course not. When she’s owning the libs, sure it’s fun, but I know what she is, and that’s a far-left politician. The idea that she should be Trump’s running mate if he’s the nominee is asinine, for example. Still, that doesn’t mean she should be accused of treason by a frantic, flip-flopping figure like Mitt Romney who can’t put his thirst for war aside long enough to respect the right to free speech.