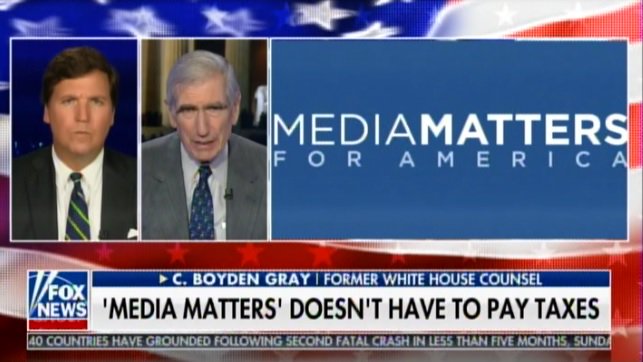 Fox News host Tucker Carlson went on the offensive against Media Matters for America’s (MMFA) in his opening monologue Tuesday, calling into question the legality of their political behavior as a nonprofit organization.

“Don Lemon is calling you dumb. Savor the moment,” Tucker said, before continuing:

But there is an ominous undertone to all of this. Don Lemon doesn’t have the power to have you arrested. Dana Nessel does. Nessel is the attorney general of Michigan. She’s created a special ‘hate crime unit,’ whose charter is to investigate any organization identified as a hate group by the SPLC. This is what weaponized politics looks like. Criticize the people in charge and the SPLC will sic men with guns on you. It’s terrifying. Even worse, you are subsidizing it without knowing it both the SPLC and Media Matters are amazingly tax exempt organizations.

“In its original tax application to the IRS, Media Matters claimed that the American news media were dominated by a pro-Christian bias that needed them to balance it. Despite the obvious absurdity of that claim the group received non-profit status,” he continued. “It has been violating the terms of that status flagrantly ever since. For example, during the Obama administration, Media Matters held weekly strategy discussions with the White House about how to hurt its political enemies.” (RELATED: Conservative Strike Back At Media Matter For Tucker Carlson Hit Job)

“This is a violation of federal tax law,” Carlson added. “Tax exempt nonprofits cannot function as an arm of a political party. Media Matters clearly does.”