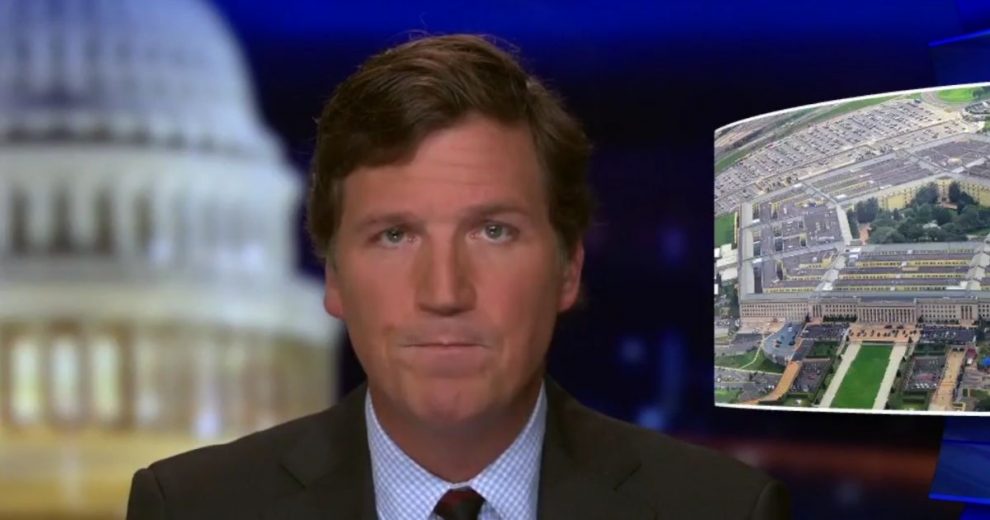 Since the Jan. 6 riots on the U.S. Capitol building, troops have descended on Washington, D.C., in mass numbers, for President-elect Joe Biden’s Jan. 20 inauguration.

While lawmakers and the establishment media say the troops are meant to protect the capital city from violence, Fox News host Tucker Carlson is not so sure.

“So no matter what they are telling you, those 26,000 federal troops are not there for your safety,” Carlson said on Monday night’s segment of “Tucker Carlson Tonight.”

“Instead, unmistakably, the Democratic Party is using those troops to send the rest of us a message about power: ‘We’re in charge now.’”

This quote is sure to stir up controversy, but Carlson has a point. It’s a point that he goes on to back up with facts and logical reasoning.

As many Americans are aware, April 1968 was a month in which massive riots took place in the capital city in response to Martin Luther King, Jr.’s assassination.

“More than a thousand people were injured in those riots, and at least 13 of them died,” Carlson said.

In comparison, he said there are three confirmed deaths from the Jan. 6 riots, one of which was an unarmed protester being shot by police.

From purely a numbers standpoint, Carlson is right. Washington, D.C., was in far more danger in April 1968 than it is now, and yet lawmakers have ordered double the number of troops this time around.

Unfortunately, we don’t even have to go all the way back to 1968 to see the hypocrisy of lawmakers’ responses to riots.

Just a few months ago, Washington, D.C., was one of many major American cities under siege due to riots in the wake of George Floyd’s death.

According to the Military Times, the number of troops deployed to the capital city during the summer was much lower than the number scheduled to be at Biden’s inauguration.

The outlet reported that there were about 4,900 National Guard troops in Washington, D.C., on June 7 during the Floyd riots, and “only about 1,500 troops were on the streets at any given time.”

Despite what the establishment media may say, those riots were not “mostly peaceful.” Candace Owens, a D.C. resident and conservative commentator, tweeted that in her experience, the riots this summer were more destructive than the Capitol Hill incursion.

As a D.C resident—our city burned for WEEKS this summer during BLM riots. They destroyed & looted private businesses for WEEKS.
What happened at the Capitol last week registered as a 2 on a scale of to 1-BLM.

Despite all this, we see a previously unimaginable number of troops in our capital city during the week leading up to the inauguration. In Carlson’s view, it is not an isolated incident.

He argued that our military officers have become more and more left-leaning over the past few years, and he provides some pretty convincing evidence.

“Our military leadership — the very same generals who howled at the idea of deploying American troops to stop an invasion of our southern border — those same generals sent tens of thousands of soldiers with rifles to Washington purely as a show of force on behalf of the political party they support,” Carlson said.

What’s more, Democratic lawmakers even had to make sure that these troops had political views that were close enough to their own.

“Democrats in Congress demanded that the troops sent to Washington this week submit to a political purity test — ideological vetting, as they put it — to make certain that every soldier professed loyalty to the new regime,” Carlson said.

“Nothing like that has ever happened in America, and just a few months ago, it would have been unimaginable. Suddenly it’s compulsory.”

In a CNN clip Carlson showed on his segment, Democratic Rep. Steve Cohen of Tennessee suggested that many of the National Guard troops are suspicious, in his view, based solely on the color of their skin and their gender.

“The Guard is 90, some odd, percent, I believe — male,” Cohen said to the CNN host. “Only about 20 percent of white males voted for Biden.”

“You’ve got to figure that in the Guard — which is predominately more conservative, and I see that on my social media, we know it — there are probably not more than 25 percent of the people that are there protecting us who voted for Biden.

“The other 75 percent are in the class that would be the large class of folks who might want to do something.”

So there you have it. Not only do Democratic lawmakers want to call in huge numbers of troops, but they also want to make sure that these troops can be trusted not to “do something” those on the left may not like.

Of course, a smooth and safe transition of power is of utmost importance on Jan. 20. Yet with the actions of lawmakers over the past few days, Americans are right to have a few questions about how the situation is being handled.