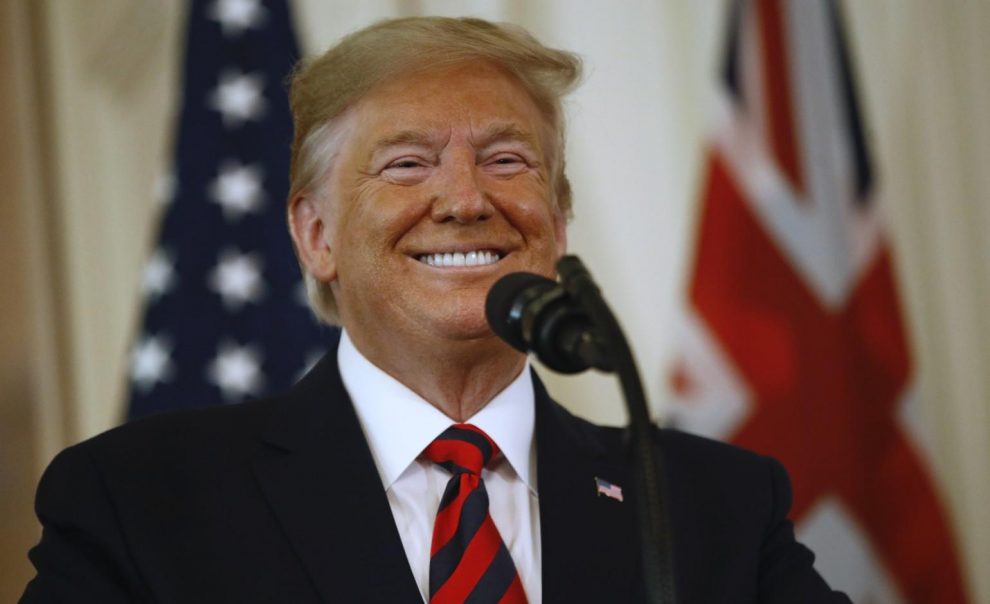 Former President Donald Trump might not be the most eloquent speaker, but he has a certain way with words when it comes to cutting down his political opponents.

Trump has always used aptly applied nicknames combined with his alchemist’s gift for turning leftists’ attacks on him into comedic gold — and he did just that in a statement Thursday meant for President Joe Biden in advance of his meeting with Russian President Vladimir Putin.

“Good luck to Biden in dealing with President Putin — don’t fall asleep during the meeting, and please give him my warmest regards!” Trump said in an emailed statement shared by conservative commentator Jack Posobiec.

Trump tells Biden not to fall asleep in his meeting with Putin pic.twitter.com/AJ8qz3Wjkl

During the long run-up to the 2020 presidential election, Trump nicknamed the septuagenarian Biden “Sleepy Joe,” a moniker that has stuck like glue to the man known for often calling a lid on his day to cut out early, often without explanation.

Biden will meet with Putin on Wednesday in Geneva, Switzerland, as part of a broader European excursion that also included a meeting with British Prime Minister Boris Johnson and the G-7 Summit in Cornwall, U.K., and a NATO summit later next week, Fox News reported.

But Trump took special aim at the meeting scheduled with the Russian president, spinning off a now-debunked Russia collusion charge the left tried with all of its political and media might to pin on him.

“As President, I had a great and very productive meeting in Helsinki, Finland, with President Putin of Russia,” Trump said of his 2018 meeting with the Russian head of state.

At the time, the left went nuts over the friendliness of the meeting between the two along with Trump’s insistence that Russia did not interfere in the 2016 election.

“Despite the belated Fake News portrayal of the meeting, the United States won much, including the respect of President Putin and Russia,” Trump continued.

“As to who do I trust, they asked, Russia or our ‘Intelligence’ from the Obama era, meaning people like Comey, McCabe, the two lovers, Brennan, Clapper, and numerous other sleezebags, or Russia, the answer, after all that has been found out and written, should be obvious,” Trump said of all of the players in the bungled Crossfire Hurricane investigation — former FBI Director James Comey, former Deputy Director Andrew McCabe, former agents Lisa Page and Peter Strzok, former CIA Director John Brennan and former Director of National Intelligence James Clapper.

“Our government has rarely had such lowlifes as these working for it,” he said, vindicated in trusting Russia’s claim over the intelligence community that seemed to be colluding against Trump.

However, the left is trying to set a different tenor for the meeting between Biden and Putin, with Time magazine positioning the meeting as the U.S. president boldly facing off against his Russian counterpart.

This week’s cover photo is Biden’s face, eyes hidden behind mirrored aviator shades showing Putin in their reflection, Biden’s lips turned down in a slight snarl for full effect. One of the headlines surrounding this image reads, “Taking On Putin.”

Of course, the truth is that Biden is weak and frail and certainly not up to the task of facing off with an adversary like Putin.

It’s not just that he’s a Democrat — a member of the party known the world around for doing nothing in the face of evil unless politically expedient — but also that he’s an elderly lifelong politician who’s about as useful as a houseplant.

Biden was a lackluster Washington mainstay even in his prime — hence his repeated public disgraces and previous failed presidential bids.

Unfortunately, age only exacerbates the risk of gaffes and serious diplomatic problems for a man who was social sandpaper to begin with.

Joe Biden calls the Royal Air Force the ‘RFA’ in new gaffe while addressing US troops in Britain https://t.co/MhhOYlLngR

Despite the current aim of this European trip as a way to mend what the former president supposedly broke in foreign relations, there’s a pretty good shot that Biden will make things worse.

Actually, compared with what Biden already has done to ruin America, falling asleep during the meeting might be the most useful thing he could do.