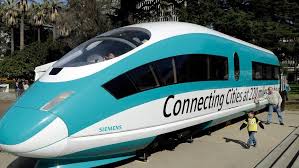 The Trump administration announced this week that it was canceling nearly $1 billion in grant money for California’s now-defunct high-speed rail project — and President Donald Trump is coming for the other $2.5 billion.

The $2.5 billion has already been spent — but California has failed to deliver the high-speed rail (on time, or at all) as promised.

Therefore, the Trump administration argues, the state has to repay federal taxpayers.

The practice of recovering money after a breach of contract, while common in the private sector, was virtually unheard of in government.

Last week, newly-inaugurated California Governor Gavin Newsom announced in his “State of the State” address that the “bullet train” would no longer be built between Los Angeles and San Francisco because it “would cost too much and, respectfully, would take too long.”

Newsom said the state would still build a portion of the high-speed rail project in the Central Valley in an effort to hold onto the federal funds that President Barack Obama’s administration had allocated to the project: “I am not interested in sending $3.5 billion in federal funding that was allocated to this project back to Donald Trump, Newsom told legislators in the State Capitol in Sacramento.