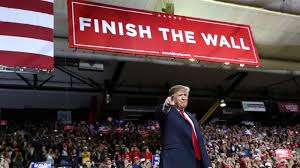 President Donald Trump will today announce a national emergency to allow him to spend $8 billion building his wall after signing a bill to avoid a government shutdown after bitter standoff with Congress.

The White House confirmed Thursday that the president will sign a bipartisan spending deal to avoid another government shutdown but will declare the national emergency in an effort to procure funds to build a border wall.

Trump will hold an event in the White House Rose Garden about the border at 10:00 a.m. Friday. He is expected to sign both the funding bill and the paperwork for his executive actions.

The move announced Thursday drew both statements of relief from lawmakers and a threat from Speaker Nancy Pelosi over the emergency declaration.