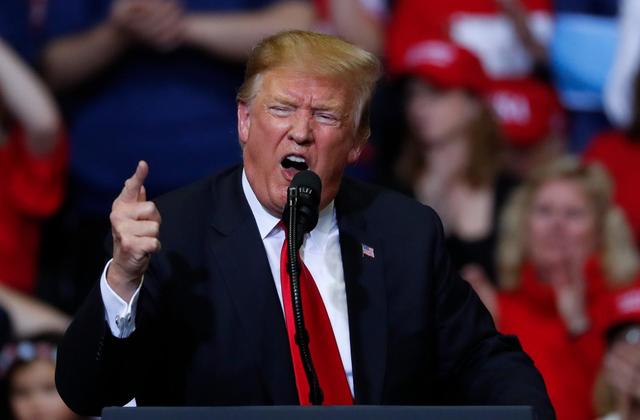 President Donald Trump threatened to close the southern border if the Mexican government does not take more active measures to quell the migrant flood during a Thursday night rally in Michigan.

Trump threatens Mexico – says if they don't stop the next migrant caravans "I am telling you right now, we will close the damn border!"

Trump lamented the massive rise in the arrival of migrants at the southern border, declaring, “Mexico could stop them so easy. … If they don’t, it’s going to cost them a hell of a lot of money. … We will close the damn border.”

Trump repeated the threat he made on Twitter Thursday morning in light of new numbers from Customs and Border Patrol (CBP), which show tens of thousands of migrants arriving at the southern border while immigration centers are already filled at maximum capacity.

Mexico is doing NOTHING to help stop the flow of illegal immigrants to our Country. They are all talk and no action. Likewise, Honduras, Guatemala and El Salvador have taken our money for years, and do Nothing. The Dems don’t care, such BAD laws. May close the Southern Border!

The president also reiterated his threat to close the border on Twitter Friday morning, saying Mexico makes “$100 billion a year” from the United States and has the strongest immigration laws anywhere in the world and therefore should “stop illegals from entering” the U.S. “through their country.”

The DEMOCRATS have given us the weakest immigration laws anywhere in the World. Mexico has the strongest, & they make more than $100 Billion a year on the U.S. Therefore, CONGRESS MUST CHANGE OUR WEAK IMMIGRATION LAWS NOW, & Mexico must stop illegals from entering the U.S….

….through their country and our Southern Border. Mexico has for many years made a fortune off of the U.S., far greater than Border Costs. If Mexico doesn’t immediately stop ALL illegal immigration coming into the United States throug our Southern Border, I will be CLOSING…..

….the Border, or large sections of the Border, next week. This would be so easy for Mexico to do, but they just take our money and “talk.” Besides, we lose so much money with them, especially when you add in drug trafficking etc.), that the Border closing would be a good thing!

CBP Commissioner Kevin McAleenan told reporters the situation at the border is nearing a “breaking point,” adding, “CBP is facing an unprecedented humanitarian and border security crisis all along our Southwest border — and nowhere has that crisis manifested more acutely than here in El Paso.”

CBP added that they were on pace to have 100,000 apprehensions and encounters with migrants illegally entering the United States, with the highest month in over a decade.

The commissioner told reporters the situation is becoming so dire that migrants are not even being processed and instead directly released into the interior of the United States because there are no facilities to house them.

Officials say what makes the situation especially dangerous is that the illegal immigrants being arrested are migrants requesting asylum who are caught and released into the interior of the United States for months or even years before appearing before a judge.

.@CBP_McAleenan: We are now on pace for over 100,000 apprehensions and encounters with migrants—with 90% (90,000) crossing the border illegally between ports of entry. March will be the highest month in over a decade. pic.twitter.com/Nmuq00asZY