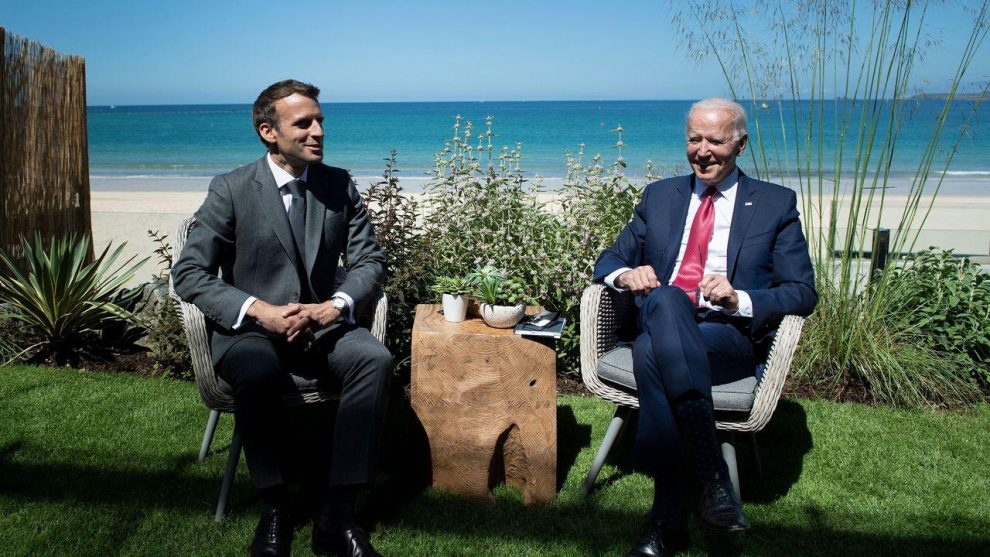 Former President Donald Trump derided Macron’s disingenuous G7 statement, where the Trump critic stated: “I think it’s great to have a U.S. president part of the club and very willing to cooperate.”

Trump responded via a statement Saturday from his Save America PAC:

“This was a quote by the President of France. He and many other Leaders before him, in France and throughout Europe, were ripping off the United States like never before. We were treated very unfairly with horrible trade deals, and paying for a large portion of their defense.

“They were taking advantage of the United States and therefore, of course, they like Biden because now they will be allowed to return to their old ways of ripping off our Country. If I were a leader of these countries, I too would like Biden far better than President Trump.

“They will now get very rich off the United States just like they have in the past until a change is made. I am for AMERICA FIRST!”

Macron was among the world leaders caught in an infamous video at a past world leaders gathering, taking shots at Trump for holding a press conference that made him late for a meeting.

In a Save American PAC statement earlier Saturday, Trump called out what he said were the election-year lies of Big Tech, the complicit media, and Democrats seeking to remove him from the White House.

“Have you noticed that they are now admitting I was right about everything they lied about before the election?

Hydroxychloroquine works
The Virus came from a Chinese lab
Hunter Biden’s laptop was real
Lafayette Square was not cleared for a photo op
The ‘Russian Bounties’ story was fake
We did produce vaccines before the end of 2020, in record time
Blue state lockdowns didn’t work
Schools should be opened
Critical Race Theory is a disaster for our schools and our Country
Our Southern Border security program was unprecedentedly successful”