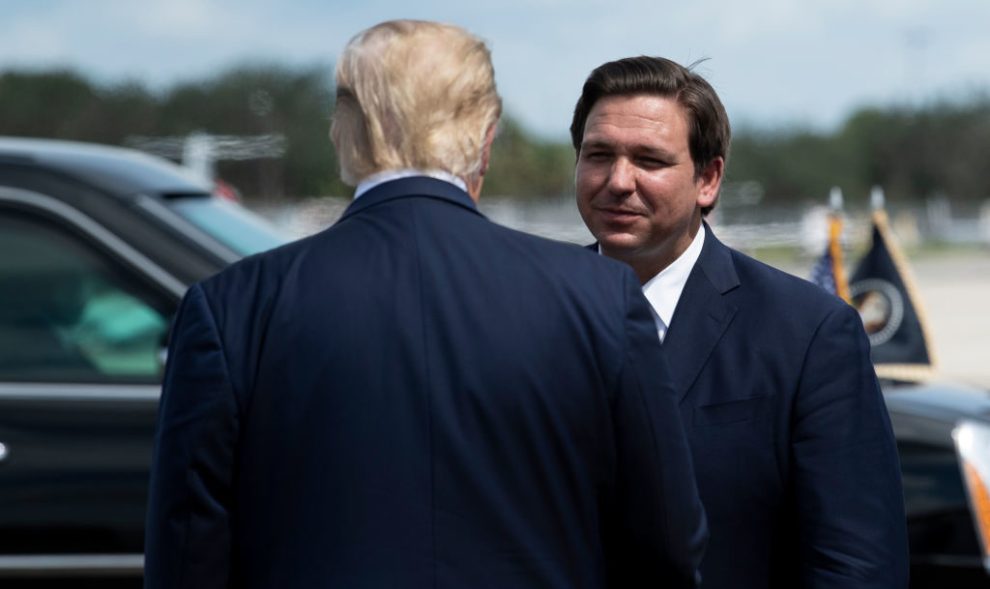 We knew this was coming. That is, if “we” have been paying attention or not in a state of denial.

Former President Donald Trump and presidential hopeful Ron DeSantis are widely seen within the Republican Party as potential rivals for the 2024 presidential nomination. Obvious public contrasts exist, yet both men have kept their powder dry, but behind-the-scenes tensions have reportedly already erupted.

Trump has all but announced his candidacy while DeSantis remains noncommittal — publicly, at least.

As I suggested in a June Article titled, Trump Plays Nice About Potential 2024 Showdown With DeSantis, but How Long Will the Geniality Last?, “Let’s just hope those wheels don’t fall off before it’s over.” While we’re far from the race officially beginning, no wheels have fallen off, yet, but they’re already wobbling.

While there have been hints along the way, according to sources familiar with both camps, “stuff” just got real. And by “real,” I mean in Trump’s mind, his former “great friend” and “tough, brilliant cookie” is now an unappreciative, “ungrateful” self-serving politician, about whom Trump reportedly grouses: “I made him.”

As reported by The Washington Post, Trump has yet to endorse DeSantis as he seeks a second term and is unlikely to campaign for him, according to Trump advisors with knowledge of the former president’s intentions. The two men once spoke regularly, a close Trump adviser said, but, “those days are gone.” The two haven’t talked since early in the summer, said people familiar with the situation, and DeSantis has not asked Trump to campaign for him, undoubtedly taken as a slight by Trump.

DeSantis, who’s favored to win re-election over Republican-turned-Democrat challenger Charlie Christ, is also trying to build support on the national stage, appealing to Trump supporters and headlining rallies in swing states for other Republicans on the ballot this fall, as he subtly distances himself from Trump, while not explicitly criticizing the former president — currently a bad political move for a Republican politician.

Don Tapia, the U.S. ambassador to Jamaica during the Trump administration and now a DeSantis donor, told WaPo that during a recent gathering with “a few dozen donors,” “everyone asked him about 2024.” But “right now, the Republican base is Donald’s base,” he added.

In recently flying migrants from Texas to a liberal enclave, Martha’s Vineyard, DeSantis took a polarizing step that Trump considered as president but eventually scuttled. It drew attention and outrage from Democrats and human rights advocates and delighted the conservative base on an issue core to Trump’s political identity: immigration.

The former president tracks DeSantis’s public appearances and polling numbers, according to his advisers who, like others interviewed for this story, spoke on the condition of anonymity to share private conversations. He has also soured on DeSantis, repeatedly criticizing him and telling advisers: “I made him.”

“He’s ungrateful,” Trump has said, according to two people close to him. “I knew him from watching Fox, and he’d done a good job about me and other things. He’s an Ivy League baseball player,” Trump has said, explaining his 2018 endorsement according to a person who has visited his Mar-a-Lago Club and heard him talk about DeSantis. “I don’t understand what happened here. I don’t understand why he doesn’t appreciate me more.”

I wasn’t there — and neither has anyone who’s inclined to shred this piece for any number of reasons, most likely because it’s in part sourced from The Washington Post and several unidentified sources reportedly close to Trump — but this sounds like quintessential Donald Trump. The egocentricity, most of all, from claiming “I made him” in reference to the popular Florida governor, who has not only become one of the most high-profile Republican leaders in America and has not only vigorously opposed the Biden administration and all things “woke,” but has also followed up his attacks against the left with concrete actions, much to the delight of conservatives across America.

Trump recently polled a room of visitors at his Bedminster golf club about what they thought of DeSantis, according to a person present for the gathering. I bet you could’ve heard a pin drop, if not a few gulps, with visitors thinking it would in be insane to praise DeSantis in front of The Donald.

So there it is — for now. Is every word of every quote true? Again, dunno, I wasn’t there.

The point of the above? Play “stupid games” with Donald Trump; win stupid prizes.

Much is yet to be seen as the Republican 2024 run for the White House begins in earnest, the day after the November 2022 midterm elections. As is always the case with politics, particularly with the presidential election more than two years away, there will certainly be twists and turns, some of which will be unsurprising; others that will blow the doors off the popcorn maker.

Given the two heavyweights likely to duke it out, the price of admission will be worth every penny.