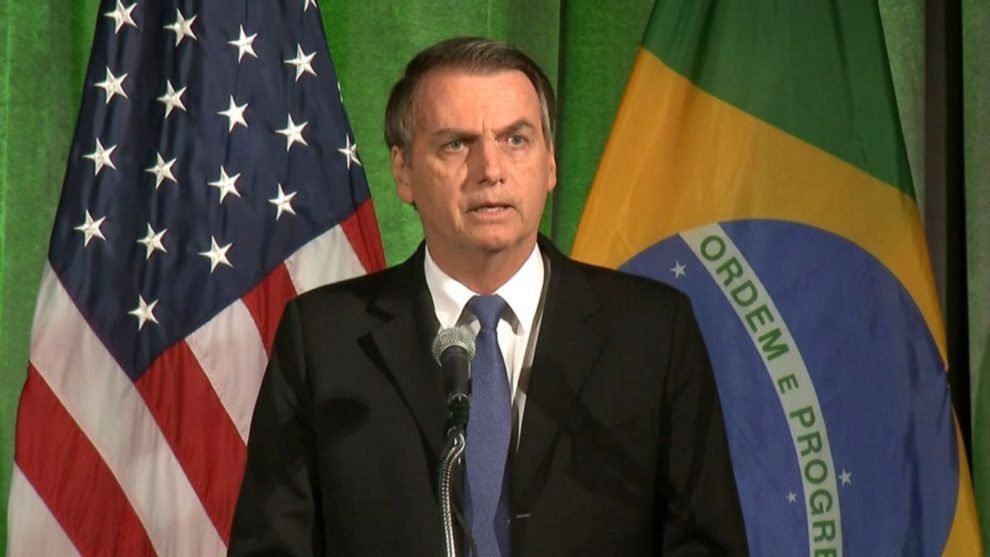 President Donald Trump’s meeting with his Brazilian counterpart on Tuesday opens the door for a new alliance and deepening trade relationship that the administration says will dramatically reshape the power dynamics of the hemisphere.

Brazilian President Jair Bolsonaro, who tweeted about his pro-American views on his way to Washington, will meet with Trump in the Oval Office before taking part in a joint press conference.

“The U.S.-Brazil relationship has always been one of potential, but yet it always seemed that that potential has never been met,” a senior administration official said. “This time, it is different.”

The senior administration official, who spoke on condition of anonymity, touted a “historic remaking” of a partnership for domestic, regional, and foreign policy priorities between the two largest economies in the Western Hemisphere.

The Trump administration will use the opportunity to announce its intent to give Brazil the status of major non-NATO ally, a preferential distinction that brings with it a higher level of strategic cooperation, according to two sources familiar with the plan.

It would be a significant step in Latin America, making Brazil only the second country in that region, after Argentina, to receive the status that just 17 countries have.

“It speaks volumes to say that we’re now there and that the Brazilians are aligned, the United States is aligned and now our militaries in many ways will be aligned,” said Fernando Cutz, who served as a senior director at the National Security Council in the Trump administration until last year.

Bolsonaro, who repeatedly invoked Trump’s name during his campaign, is sometimes referred to as the “Trump of the Tropics.” That caught Trump’s attention.

Within an hour of being confirmed, Bolsonaro received a congratulatory call from Trump who committed to working side-by-side on issues of importance to the two countries.

“He was unabashedly — and particularly in Brazil — unabashedly pro-American,” the senior administration official said of Bolsonaro. “He ran on the campaign that he wanted to be the best friend to the United States, that he wanted to have this close relationship with President Trump and what that would mean for Brazil, what that would mean for the region and the world. I think that was very important.”

Brazilian officials are expected to discuss meat, sugar and ethanol trade with the United States.

Trump has already embraced Bolsonaro as a “like-minded leader” despite the Brazilian leader’s “flamboyant disregard for human rights and democratic norms,” said Benjamin Gedan, who was National Security Council director for South America during the Obama administration.

But it remains unclear how willing Trump will be to further open up U.S. markets to Brazil.

“Given Trump’s protectionism, this visit will test just how far foreign leaders can get through flattery,” Gedan said.

The senior administration official said the United States has a trade surplus with Brazil of about $27 billion, but officials see opportunities for “deepening our trade relationship.”

“We want to move forward. You know, these are two largest economies in the Western Hemisphere,” the official said. “There’s a lot of things that we do and we share and we produce in common, but there’s also a lot of things from where there’s a comparative advantage.”