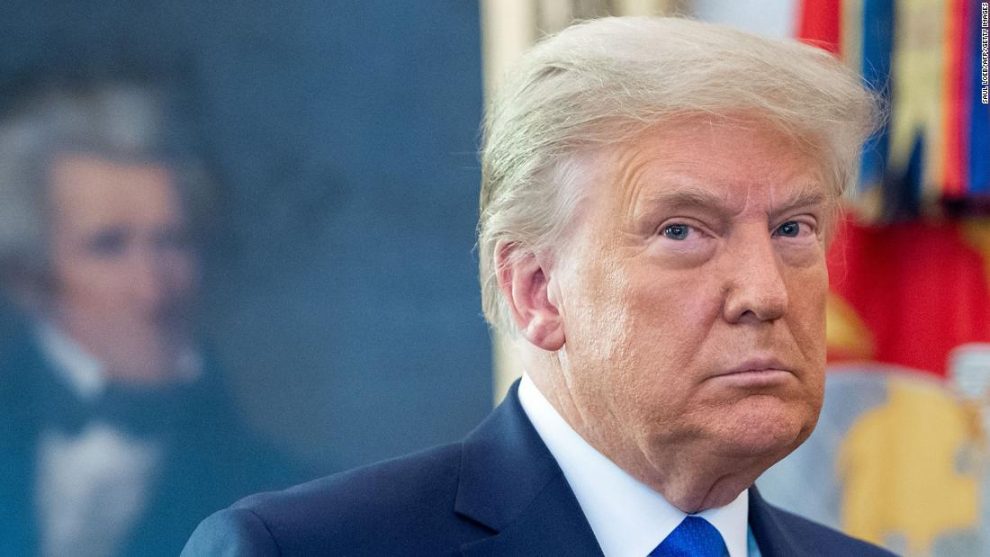 “I don’t like making it easier,” Trump told Breitbart News when asked about this Biden initiative. “I think people should go through a process. I’m all for legal immigration, but what’s happened in the last two years has probably never happened in any country in history. I think you have over 12 million people who will have come in in a very short period of time—not to mention the drugs and the human trafficking and all the other things that come with it. No, I don’t think we should make citizenship easy. We should make citizenship responsible—you have to be responsible if you come in to be a citizen. I would disagree with it.”

Trump’s comments came during an exclusive interview earlier this month at his Doral golf resort here in Miami.

CNN reported earlier in December that Biden’s administration, through the U.S. Citizenship and Immigration Services (USCIS) agency, is preparing to launch a pilot program in 2023 to weaken citizenship tests for prospective Americans.

The Biden administration plans to conduct a trial for portions of the naturalization exam, which immigrants must pass to become US citizens, next year, to try to make the test more accessible, US Citizenship and Immigration Services will announce Wednesday.

The naturalization exam is a crucial step to an immigrant’s path toward US citizenship, potentially impacting hundreds of thousands of immigrants who seek citizenship annually. President Joe Biden signed an executive order at the start of his administration that included a directive to review the English and civics tests for naturalization. Wednesday’s announcement is a result of that order.

The trial will include changes to the English-speaking component of the test, which is not standardized, and the civics component following a review by USCIS subject matter experts, according to the agency. The two other parts of the exam – reading and writing – are already standardized and will remain unchanged.

One of the major changes to the citizenship test that Biden’s team is exploring is switching open-ended questions to multiple choice questions—or “multiple guess,” as Trump called it during his Breitbart News interview.

“The trial civics portion is expected to be redesigned in a multiple-choice format, instead of it being fill in the blank,” Alvarez wrote. “Currently, applicants study 100 civics test items and are required to answer six of 10 civics questions correctly to pass.”

Trump’s opposition to making it easier to pass a citizenship test—he does not want it to be more difficult, he just wants it to be “responsible”—is in line with his long held views that the nation needs to get tougher on immigration. It was a centerpiece of his 2016 campaign, and back then in 2015, for instance, he told Breitbart News when his then-rival former Florida Gov. Jeb Bush was attacking him in Spanish on the campaign trail during the primary campaign that he believed leaders should speak English while in the United States.

During Trump’s time in office, too, he implemented a number of significant reforms to the immigration system, including deals with the Northern Triangle countries and with Mexico to establish the Remain-in-Mexico plan that forced prospective asylum seekers to wait on the other side of the border while their cases were processed. That, combined with the parts of the wall on the border that Trump was able to build—he did not finish the wall because of fierce opposition to it from Democrats and some establishment Republicans in Congress—severely cut down the number of migrants streaming into the country. So did the implementation of Title 42, a pandemic public health measure which has slowed the inflow of migrants since the onset of the coronavirus pandemic in 2020.

In Biden’s first week in office, he ended Trump’s Remain-in-Mexico as a policy and stopped construction of the wall—which has caused a massive surge across the border. Title 42 has remained in place until now, even as Biden and his team push to lift it—a fight currently playing out at the highest levels of the court system at the U.S. Supreme Court.

“You haven’t seen anything yet. Wait until you see next week when Title 42 ends,” Trump told Breitbart News of the efforts to lift Title 42 combined with the broader surge in migration.

Trump also said he believes Biden ending Remain-in-Mexico as a policy is a sign that he and Democrats “hate” America.

“The fact they want to get rid of Remain in Mexico tells you they hate the country,” Trump said. “They hate our country, or they’re very stupid—and they’re not stupid. Look at the way they run their elections, okay? They’re not stupid. It means they really hate the country. They’re destroying the country. Prisons are being emptied out. Some of the worst people are coming into our country, totally unvetted and totally unchecked. Who could want that? How is that good in any way, shape, or form? Again, I want immigration. I like immigration. But it’s got to be good immigration. You have to come in legally. What they’re doing is not even thinkable. You haven’t mentioned Title 42 but the Title 42 is—that’s big stuff.”

Many people are currently waiting on the other side of the United States border with Mexico for Title 42 to be formally lifted, and if and when it is lifted they intend to stream into the country.

Asked what he would do differently, and to contrast what a future Trump administration would look like as compared to the current Biden administration when it comes to the border, Trump said he would be a lot tougher.

“The first thing I would do is the borders would be greatly strengthened,” Trump said. “You know we built hundreds of miles of wall. We then were going to expand the original projections and we had that almost done—it would have taken three weeks to do it. But walls work. We had the strongest border in the history of the country and it worked for drugs and human trafficking too because that goes hand in hand, but then he came in and I saw they weren’t closing up those final gaps. The material was there, the fencing was there, and they were going to be erected over a period of three weeks. I said I wonder why they’re doing that and that’s when I realized they’re actually looking at open borders. But we had the strongest border and the safest border in the history of our country and now you have the worst I believe in the history of any country because I don’t believe even any third world country had anything like this.”