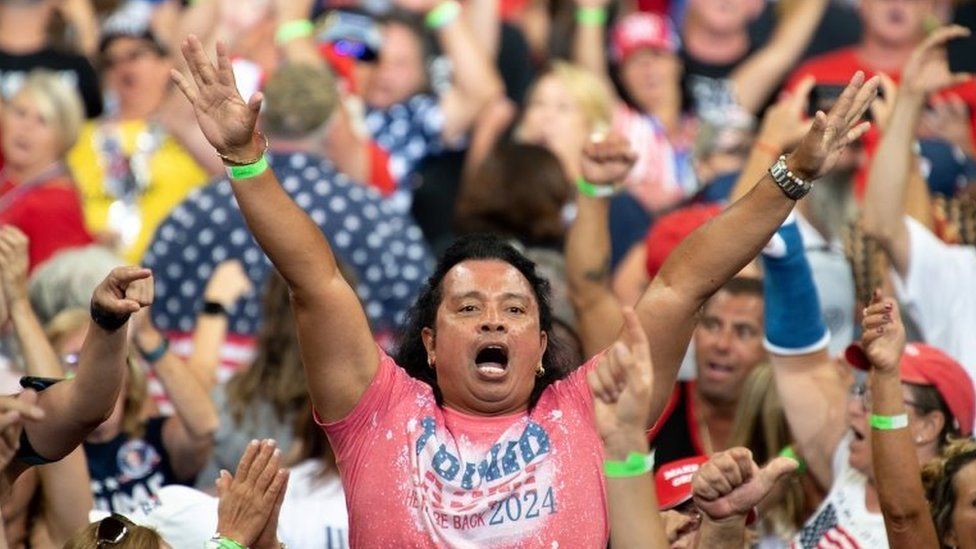 Donald Trump held a rally in Pennsylvania on Saturday evening in front of what looked to be a packed house. The rally was ostensibly held to support the senatorial and gubernatorial races of Mehmet Oz and Doug Mastriano, but they certainly didn’t take center stage, physically or as a topic of discussion. Whether that’s a good or a bad thing will be in the eye of the beholder.

Trump came out of the gates swinging against Joe Biden, ripping apart his recent national address (see Joe Biden Crosses Lines in Grotesque National Address) labeling half the country as threats to “democracy.”

TRUMP on Biden's speech: "The most vicious, hateful, and divisive speech ever delivered by a [U.S.] President… you're all enemies of the state. He's an enemy of the state, if you want to know the truth. The enemy of the state is him and the group that controls him." #TrumpRally pic.twitter.com/ImTkCtTBMS

At another point, Trump said Biden looked like the “devil” standing in front of the now infamous blood-red lighting that highlighted his divisive speech on Thursday. He’s not wrong on that front. He’s also not wrong that Biden’s speech was full of hatred and anger. As I shared in my breakdown of it, it was the most disgusting national address I’ve ever seen a president give, and lots of people far older than me seem to be concurring.

The former president then moved on to the FBI and the current DOJ criminal investigation targeting him. He didn’t hold back there either.

TRUMP on the FBI's Mar-a-Lago raid: "One of the most shocking abuses of power by any administration in American history… a travesty of justice that made a mockery of America's laws, traditions, and principles before the entire world." #TrumpRally

Calling the raid “shameless” and a “travesty of justice,” Trump claimed South American leaders suggested the US would condemn their countries if their administrations carried out such an act. Again, he’s not wrong. It’s been odd to see so many people who are quick to call Hungary and El Salvador fascist countries (despite having free elections) suddenly be fine with Joe Biden targeting his political opponents. There’s a reason that’s a line that isn’t supposed to be crossed, at least not without something far more serious and compelling than “mishandled documents.”

Later, Trump got to the part of the night that includes the candidates. Mastriano got a roaring welcome, Oz less so. There was this bit of comedy thrown in during the introduction for the senate candidate.

TRUMP: "@DrOz did an examination on me… 'He's extremely healthy, really a very, very, fine, fit man but, he should lose 20 or 25 pounds.' I was so angry, I didn't speak to him for years." #TrumpRally #SaveAmerica pic.twitter.com/dhgSgcUUGt

Trump’s endorsement of Oz still remains a bit of a head-scratcher, but he’s the guy, and I’ve been doing my part going hard after John Fetterman. Unfortunately, and this was my main critique of the night if you are looking for one, Trump didn’t really do so. He spent very little time on Fetterman, and the attack he did lodge was one of the tamer ones available.

I guess Aaron Rupar, the wild lefty providing the above clips, doesn’t understand what a joke is, but I digress. I was really hoping Trump would spend a good 15-20 minutes just ripping Fetterman. There’s so much material that he left sitting on the table, from Fetterman being supported by his parents to his decision to skip out on a debate with Oz. I’m sure Trump will be back for another rally before election day and hopefully, he takes the gloves off, because Fetterman is terrible and needs to lose.

Moving on, the night ended on an inspirational note as music played and Trump delivered his closing remarks.

Wow. Cinematic music plays to a massive audience in Pennsylvania as Trump brings his energetic, hopeful, optimistic speech to a conclusion. Must watch. pic.twitter.com/Ycpk7yYVGf

All in all, the president spoke for well over an hour, which is typical for him. There’s a lot more he said that I didn’t cover here, though, much of what was left is the stuff he says at every rally. I think it was overall an effective push to get out the vote heading into the mid-terms in a key state. I just wish he would have nailed Fetterman to the wall in the process.