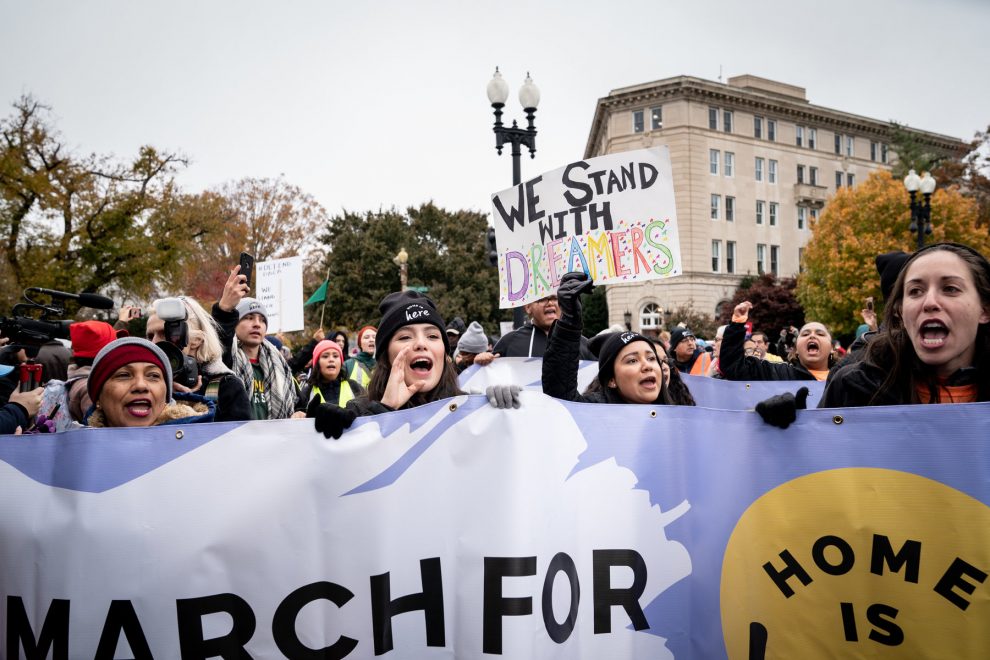 President Trump says he will be signing “a very major immigration bill” within the next month that provides a “road to citizenship” to the roughly 800,000 illegal aliens who are enrolled in former President Obama’s Deferred Action for Childhood Arrivals (DACA) program.

During an interview with Telemundo on Friday, Trump said he is working on a comprehensive immigration plan that will allow hundreds of thousands of DACA illegal aliens to remain permanently in the U.S. and eventually obtain American citizenship.

Trump said the plan would be unveiled “over the next four weeks.” He went on to say:

No, what I’m going to do is that they’re going to [be] part of a much bigger bill on immigration. It’s going to be a very big bill, a very good bill, and merit-based bill, and it will include DACA, and I think people are going to be very happy.

If you look at the Supreme Court ruling, they gave the president tremendous powers when they said that you could take in, in this case, 700,000 or so people, so they gave powers. Based on the powers that they gave, I’m going to be doing an immigration bill. One of the aspects of the bill that you will be very happy with, and that a lot of people will be, including me and a lot of Republicans, by the way, will be DACA. It gives them a road to citizenship.

BREAKING: President Trump tells Telemundo’s @jdbalart he will sign an executive order on immigration that will include DACA in the coming weeks. #mtpdaily

Trump: “One of the aspects of the bill is going to be DACA. We are going to have a road to citizenship.” pic.twitter.com/M926cty8A1

The remarks come after the Supreme Court ruled last month that the Trump administration could not end Obama’s DACA program as they had requested and would need to refile paperwork to do so. At the time, Trump said he would quickly be refiling the paperwork to permanently end DACA.

Trump slammed House and Senate Democrats for failing to work with him on DACA amnesty legislation. He said:

I’m taking care of DACA. I had a deal with the Democrats and they broke the deal. The DACA could have been taken care of two years ago, but the Democrats broke the deal. All of a sudden they just broke it for no reason. Actually, they had a court case that slightly went their way, and they said, ‘Oh, let’s not talk about the deal anymore.’ You remember that. We talked about it.

In a statement to Breitbart News, White House Deputy Press Secretary Judd Deere confirmed the president is working on an executive order related to immigration.

“As the President announced today, he is working on an executive order to establish a merit-based immigration system to further protect U.S. workers,” Deere said.

“Furthermore, the President has long said he is willing to work with Congress on a negotiated legislative solution to DACA, one that could include citizenship, along with strong border security and permanent merit-based reforms. This does not include amnesty,” Deere said. “Unfortunately, Democrats have continually refused these offers as they are opposed to anything other than totally open borders.”

A DACA amnesty would put more citizen children of illegal aliens — known as “anchor babies” — on federal welfare, as Breitbart News reported, while American taxpayers would be left potentially with a $26 billion bill.

Any plan to give amnesty to DACA illegal aliens that does not also include provisions to halve legal immigration levels — the U.S. admits about 1.2 million legal immigrants a year at the expense of America’s working and middle class — would give amnestied illegal aliens the opportunity to bring an unlimited number of foreign relatives to the country.

At the southern border, a DACA amnesty has the potential to trigger a border surge that could triple the number of illegal aliens pouring through the border. Since DACA’s inception, more than 2,100 recipients of the program have been kicked off because they were found to either be criminals or gang members.