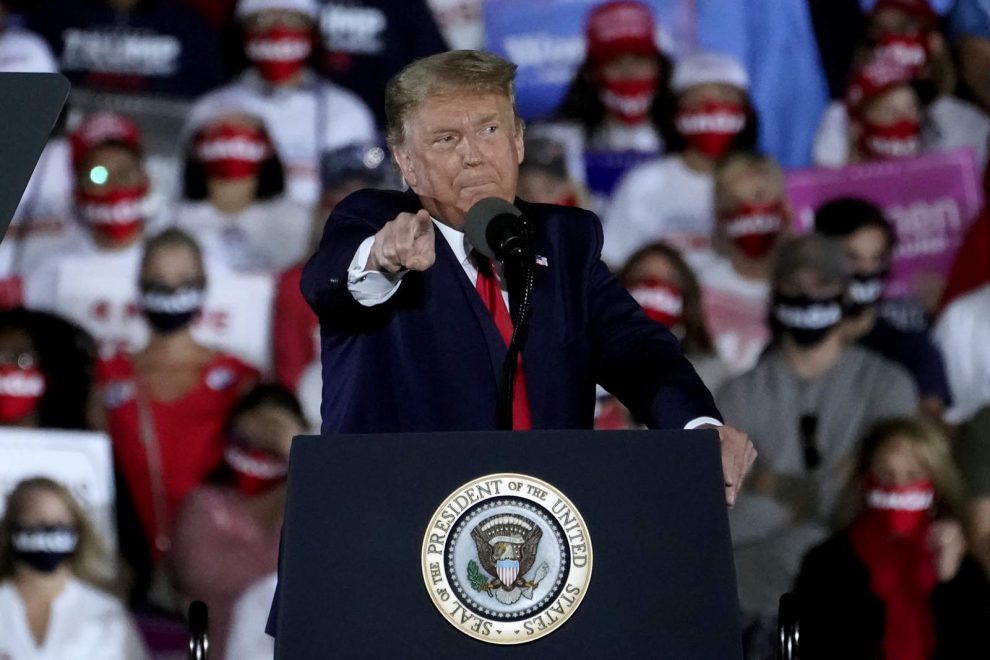 President Trump and his campaign are leaning into attacks on Democratic nominee Joe Biden’s family and business dealings in the closing days before the election, believing it reinforces their message of Trump being an outsider and Biden a lifelong Washington politician.

Raising questions about Biden’s character is also a pivotal piece of the president’s late strategy, as polls show the former vice president is viewed in a far more positive light than Trump’s 2016 Democratic challenger, Hillary Clinton.

It’s a strategy that could backfire and some Republicans believe it’s the wrong move, as polls find voters are far more concerned about jobs, the economy, health care and the coronavirus pandemic.

Biden and his campaign have strenuously denied any wrongdoing and the media has been hesitant to cover the allegations.

Trump, who was impeached for pressuring Ukrainian officials to dig up dirt on the Bidens, has dealt with scores of his own controversies over conflicts of interest, influence peddling and nepotism in his four years in Washington.

But the president’s advisers say the allegations that Hunter Biden used his father’s influence to land foreign business deals plays straight into their efforts to cast Biden as a “swamp creature” who has become a part of the corrupt culture in Washington during his decades in politics.

“It’s a reminder that Joe Biden is a part of the swamp, that he and his family have gotten stinking rich without ever having to build or make anything,” said Trump campaign adviser Jason Miller. “It’s all come from selling access.”

The Trump campaign is up with a national television ad about Hunter Biden and a half-dozen more are running on digital platforms.

The Trump campaign tried to blindside Biden two hours before Thursday’s debate in Nashville, organizing a press conference with Hunter Biden’s former business partner, Tony Bobulinski, who claimed that Joe Biden was involved in his son’s efforts to launch a business venture with a Chinese energy company.

Bobulinski also claimed Biden was lying when he said he never discussed business with his son. Bobulinski, a former Naval officer, is turning over documents and phones to the FBI and the Senate Homeland Security Committee, which is led by Sen. Ron Johnson (R-Wis.), a Trump ally. A previous investigation led by Johnson offered no evidence of wrongdoing by Biden in connection with his son’s work in Ukraine.

Trump repeatedly brought up Hunter Biden during the debate Thursday night, referencing a leaked email from 2017 that Bobulinski claims is authentic and proves Biden’s involvement in the China venture.

Biden fended off the attacks by turning the scrutiny back to Trump, noting that he has repeatedly refused to release his tax returns, and by redirecting the conversation to the economic pain being felt by American families.

“It’s not about his family and my family. It’s about your family, and your family’s hurting badly,” Biden said. “If you’re making less than, if you’re a middle-class family, you’re getting hurt badly right now.”

Biden also denied that anything “unethical” was done with respect to his son’s work for a Ukraine gas firm, Burisma Holdings, while he was vice president.

Some Democrats and national security experts have said the way the Hunter Biden allegations were discovered — through a laptop that he allegedly dropped off at a repair shop and never picked up — has the hallmarks of a Russian disinformation campaign, although the director of national intelligence says there is no evidence of this.

Regardless, Democrats say that Biden’s rebuttal was effective.

Democratic strategist Basil Smikle said that voters are unlikely to be moved by the issue of Biden’s son’s business dealings, especially given how Trump has directed millions of his own campaign dollars toward Trump-branded properties and has empowered his own family members inside the White House.

“I don’t think voters care about the details of Hunter Biden’s business activities or Joe Biden’s relationship to them, especially when they have spent the last four years watching the president’s family assume the role of his closest advisers over seasoned policy professionals,” Smikle said.

GOP pollster Frank Luntz made waves this week for excoriating the Trump campaign for focusing on Hunter Biden at all.

Some Trump allies argue that, while the campaign should be discussing Hunter Biden’s business dealings, they should not be the only focus of Trump’s closing message.

“I think at the end of the day elections are about tomorrow and Americans want to see what America looks like post COVID,” said Bryan Lanza, a former Trump campaign official, noting that Trump should expand on what he is going to do to expedite the recovery from the pandemic.

Lanza said that the Trump campaign was still right to focus on the Bidens’ business dealings as part of an attack on Biden’s character.

One major issue for the Trump campaign is that the media has been extremely cautious in its coverage of the Hunter Biden allegations.

The news media was criticized for its intense scrutiny of Democratic nominee Hillary Clinton’s private server and hacked emails in 2016. There are widespread fears about the possibility of a foreign influence campaign and deep wells of distrust between the press and key figures in Trump’s orbit, such as Rudy Giuliani.

The Trump campaign is fuming over what it sees as a media blackout.

On a press call before the debate, Richard Grenell, Trump’s former ambassador to Germany, refused to answer questions that were not about the issue and interrogated reporters about whether their outlets had covered the story.

“It’s really now about your own credibility of whether or not you all are going to report the news,” he said.

The New York Post story about Hunter Biden’s laptop was not covered with any degree of seriousness outside of right-wing media.

Bobulinski has shared the text messages between himself and the Biden family with media outlets, but few mainstream outlets have reported on their contents.

A long-awaited Wall Street Journal story that many on the right expected would be an election-altering bombshell largely fizzled, finding that corporate records in a proposed China deal did not mention any role played by Joe Biden.

“My son has not made money in terms of this thing about — what are you talking about — China. I have not had it. The only guy that made money from China is this guy. He’s the only one. Nobody else has made money from China,” Biden said during Thursday’s debate, gesturing to Trump as he referenced a New York Times report revealing that the president has a previously unknown Chinese bank account.