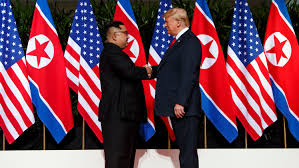 HANOI – This is not your traditional love story.

Not when a U.S. president jokes about how he “fell in love” with a North Korean dictator … a year after each threatened the other with nuclear annihilation.

Not when the stakes of Donald Trump’s personal relationship with Kim Jong Un are so high – the fate of North Korea’s nuclear weapons programs, the subject of another Trump-Kim summit that begins Wednesday in Vietnam.

“I was really being tough – and so was he – and we would go back and forth,” Trump said during a Sept. 29 speech in Wheeling, West Virginia, in the heat of the congressional elections.

“And then we fell in love, OK?” Trump told his somewhat bemused supporters. “No … really … He wrote me beautiful letters.”

Almost exactly a year before, on Sept. 19, 2017, Trump had a much less friendly message for Kim. He told stunned delegates to the United Nations General Assemblythat he would retaliate in kind to Kim’s nuclear threats, and “totally destroy North Korea” if necessary.

“Rocket Man is on a suicide mission for himself and for his regime,” Trump said then.

See also  Dr. Fauci Took Some of His Own Medicine, and It Didn't Go Well
→ What are your thoughts? ←
Scroll down to leave a comment: