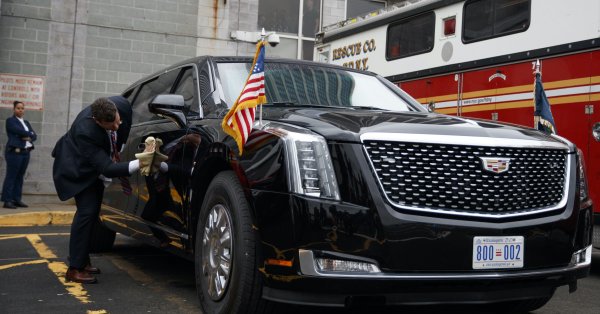 President Donald Trump may give the Daytona 500 crowd a unique spectacle, according to a new report.

But there could be more….

Fox News chief White House correspondent John Roberts tweeted that Trump may go for a ride around the famed oval in the presidential limousine, nicknamed “The Beast.”

“SCOOP: Multiple Sources tell @FoxNews that @realDonaldTrump is planning to take a lap at the @DISupdates Daytona International Speedway in the ‘Beast’ presidential limo ahead of the Daytona 500. It’s not 100%, but that is the plan at the moment,” Roberts tweeted.

“The Beast,” which is similar in appearance to a Cadillac XT6, weighs about 10 tons and is designed to offer Trump maximum protection from any assassination threat.

“The leader of our country is coming to the Daytona 500. How cool is that?” Cup Series champion Joey Logano said, according to The Associated Press.

“That kind of solidifies what our sport is. It’s a huge event. We’re a big sport, and to be able to have the president come here, that’s something we all should be proud of. Whether you support him or not, it doesn’t matter. It shows the unity in our sport and how big our sport really is,” he said.

What a way to start The Great American Race! 🏎🏁https://t.co/uXDtBOuObp