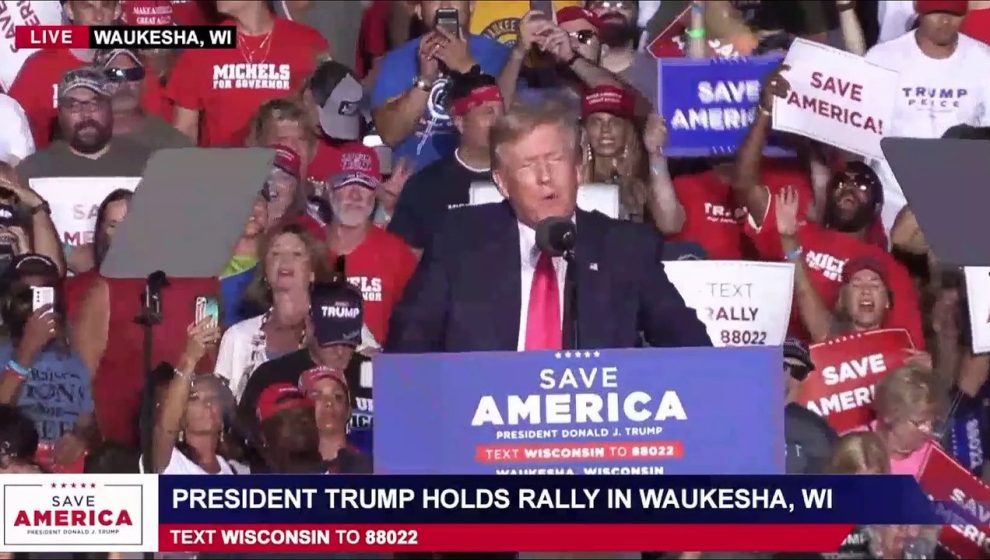 Former President Donald Trump hosted a rally Friday evening in support of Republican gubernatorial candidate Tim Michels and other Wisconsin Republicans to whom he has lent his support.

Trump began his speech by criticizing House Speaker Nancy Pelosi for visiting Taiwan, saying she gave Beijing an “excuse” to invade the island. The speaker arrived in the island this week despite repeated warnings from China that doing so would escalate tensions.

Trump spent much of his speech lamenting the policy changes his successor, President Joe Biden, made which he asserted led to the nation’s current economic and geopolitical state. “The job could have been done,” Trump said of the border wall, which he insists was three weeks away from completion before Biden canceled the project.

TRUMP: "Our children are captives to unhinged Marxist educators. Where do they come from?" #TrumpRally pic.twitter.com/DEuPncYtTP

TRUMP: "Instead of targeting Republicans, conservatives, Christians, and patriotic parents, the Biden administration should try going in and dismantling the street gangs and vicious criminal cartels that are dominating these Democrat-run cities." #TrumpRally pic.twitter.com/4HO7Tgm3ih

See also  Martha’s Vineyard Residents Proclaim ‘They Enriched Us’ After Illegal Aliens Are Deported to Military Base
→ What are your thoughts? ←
Scroll down to leave a comment: