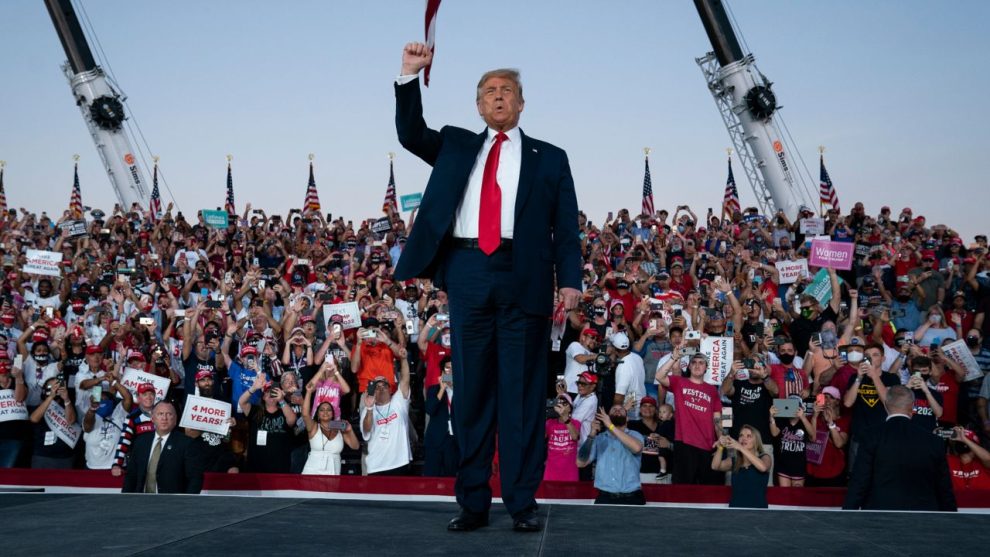 “We have a country that’s in big trouble,” Trump said at a rainy Save America rally in Greensburg, Pennsylvania, which aired live on Newsmax. “Tuesday’s primary results: They’re just the latest proof that we have transformed the face of the Republican Party. Thank goodness.

Trump said the 2020 election, which he has declared marred by fraud, has led to the Democrats “destroying our country.”

“Joe Biden and the radical left Democrats have turned calm to chaos, competence into incompetence, and stability into anarchy, prosperity into poverty, and security into a catastrophe.”

Trump blasted Democrats for their soft-on-crime policies and defund the police movements.

Trump called on his supporters to vote for public safety in this November’s midterm elections.

“They really are the party of the American dream, which is being taken away from you. If you want to make our country safer for violent criminals, vote for the radical Democrats.

“If you want to make it safer for your family, your children, and for law-abiding Americans, you must vote for Republicans. You must.”

Trump also hit Democrats and the Biden administration for pious attempts to root out “disinformation,” after their years of claimed Trump campaign collusion with “Russia, Russia, Russia.”

“It’s disinformation,” he said, “You know, they’re full of disinformation. That’s what they, that’s all they’re good at, that stuff.”

Trump appeared in western Pennsylvania just 11 days ahead of the May 17 primary that will determine the slate for one of the key 2022 midterm battleground states.

“Six months from now the people of Pennsylvania are going to vote to fire the radical left Democrats, and you’re going to send Dr. Oz to fight for you in the U.S. Senate, and you’re going to elect an incredible slate of true America First Republicans,” Trump told the crowd, decked out in raincoats and umbrellas on a rainy night.

Trump hit President Joe Biden and his flailing administration for a deadly and “embarrassing” withdrawal from Afghanistan and for allowing Russia’s Vladimir Putin to invade Ukraine.

“This is the most dangerous time in the history of our country because of the incredible power of modern day weaponry,” Trump said. “They don’t know how to deal with Vladimir Putin. They don’t; they’re saying exactly the wrong thing at the wrong time.

“They know nothing about psychology and what it takes to end this madness that’s going on. Millions of people will end up being killed because we don’t know what the hell we’re doing. They are saying exactly the wrong thing at the wrong time. This should never have happened. And frankly, it should not be allowed to continue.”

“We had the greatest economy in the history of the world with virtually no inflation,” Trump said. “We had no inflation. We had energy. We had cheap gasoline. We had cheap electricity — where everything was so good all they had to do is go to the beach and relax. The best borders.

“Biden created the worst inflation in more than 50 years, and it’s going to go much higher. It’s costing families more than $6,000 a year; that’s bigger than any tax increase ever proposed.”

Trump has continued to stop short of announcing a 2024 presidential campaign, repeating his oft-mentioned mantra.

Trump also delivered his oft-repeated tease for a run at the White House again.

“We’re just six months away from the most important midterm victory in American history, and we need a landslide so big that the radical left cannot rig it or steal it,” Trump said. “You know, at a certain point, if you win by enough they can’t rig it, but we’re also watching them very closely — more closely than ever before.

“But first we have to secure a massive victory for Dr. Oz in this primary.”