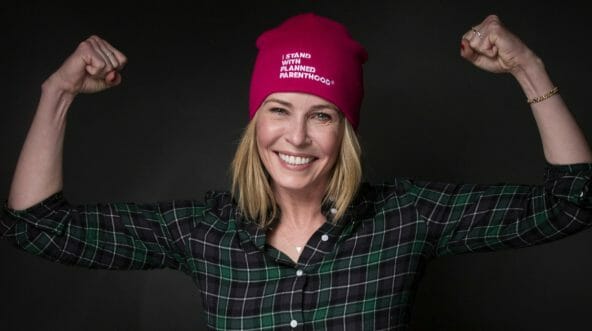 It’s not really news when a Hollywood star says that Donald Trump’s election made them become “unhinged.”

When that star says she went into therapy because of it, related Trump’s win to the death of her brother and says that it made her “pivot” away from alcohol toward marijuana, I think that takes “unhinged” to a new, newsworthy level.

It may not surprise you that Chelsea Handler is infected with Trump Derangement Syndrome, but from her appearance on HBO’s “Real Time with Bill Maher” on Friday, you got the impression that she might be patient zero. The comedian was ostensibly appearing to promote her new book, “Life Will Be the Death of Me” — which, according to Maher, is about how the 2016 election gave her a serious knock and how she “came back stronger.”

That last part, it must be noted, should be left to the discretion of the home viewer.

“I had to pay a psychiatrist to listen to me b—- about Donald Trump for about the first three weeks,” Handler said.

“And then once when we got past that and got to the real stuff, I realized the parallel there was my world becoming unhinged when I was a little girl, my brother died when I was nine years old. I had never related the two, but for me, as I can imagine it must have been for so many people, it was an emotional trigger of everything being destabilized, and I realized how spoiled and privileged I had been all my life and realize to be this upset and this on-a-ten every day and the outrage and the anger, I just wanted to f—ing fight people, you know? And I was like, ‘I have to go see a psychiatrist.’”

I can tell you the one part of that statement that doesn’t sound outré, and that’s the last sentence. That I totally agree with.

Maher went on to diagnose Handler with “white guilt,” something she agreed with.

“I think you can also focus on becoming a better advocate-slash-ally for people from marginalized communities,” she said, adding that you should “look outside to others.”

Trump, she said, also “led” her away from drinking and toward the “gateway drug to meditation,” marijuana.

“What I discovered is that alcohol and outrage are not a good mix, it’s like a hat on a hat,” Handler said. “So, I pivoted towards weed and cannabis.”

But happily, she’s not too outraged about Joe Biden or his touchy-feely nature.

“I think Joe Biden is just a grandfather, you know what I mean? And he’s old,” Handler said. “I don’t like comparing — I don’t like these stories of these women coming out and talking about a man smelling their hair or kissing the back of their head.”

However, she said that taking it too seriously “diminishes people who have actually experienced bulls—.”

As you can see, there’s really only one brand of politician that could make her angry because of his or her actions — which means it’s not the politician’s actions to begin with. Trump Derangement Syndrome is an opportunistic disease, infecting already susceptible populations.

Completing this poll entitles you to Conservative Tribune news updates free of charge. You may opt out at anytime. You also agree to our Privacy Policy and Terms of Use.

If a politician makes you feel this bad about yourself and your lot in life, you’re the problem.

Trump didn’t remind you about your dead brother. He didn’t get you to smoke marijuana in place of problem drinking. He didn’t destabilize or unhinge you. He did none of these things. You did them to yourself.
Source