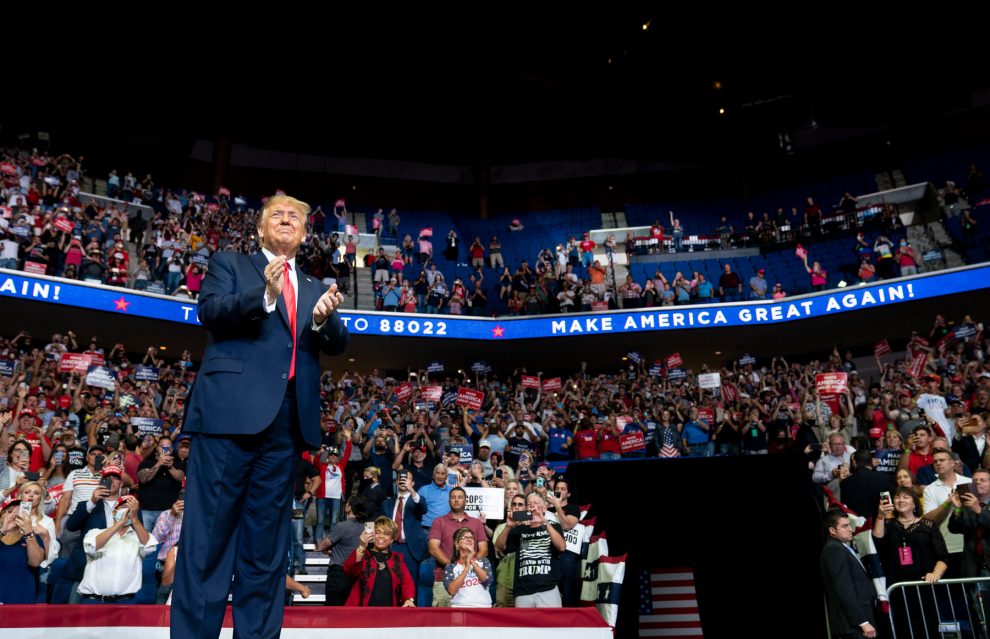 President Trump on Sunday denied that he would declare premature victory in the election but signaled that Republicans would mount legal challenges to prevent ballots from being counted after Election Day.

“I think it’s a terrible thing when ballots can be collected after an election. I think it’s a terrible thing when people or states are allowed to tabulate ballots for a long period of time after the election is over because it can only lead to one thing,” Trump told reporters in Charlotte, N.C., criticizing decisions by the Supreme Court to allow ballots to be received after Election Day in several battleground states.

“I think there is great danger to it, and I think a lot of fraud and misuse can take place,” Trump continued, without providing specific evidence for his claim that extending deadlines for receiving ballots could result in fraud.

“We’re going to go in the night of — as soon as the election is over — we’re going in with our lawyers,” Trump said, mentioning the state of Pennsylvania specifically.

Trump made the comments to reporters shortly after landing in North Carolina for a campaign rally. He was responding to a question about an Axios report that he planned to declare victory prematurely if he appears to be leading Democratic nominee Joe Biden on election night, which he dismissed as “false.”

While news networks have sometimes been able to call presidential races on Election Day or the day after, states normally take time to finish counting and certify their results. This year, the number of mail-in ballots has exploded as campaign and election officials encourage people to send in ballots early and avoid polling places during the coronavirus pandemic.

The Supreme Court held last week in two separate cases that ballots in Pennsylvania and North Carolina that are not postmarked after Election Day and that arrive three and nine days after Nov. 3, respectively, will be counted. The rulings represented a victory for Democrats. In a separate ruling, the high court maintained a Nov. 3 deadline in Wisconsin for the receipt of mail ballots.

The high court also left open the possibility of taking up a still-pending GOP challenge to Pennsylvania counting procedures.

Trump, who has launched baseless attacks on the integrity of mail-in voting throughout the campaign, has made clear that he believes ballots should not be accepted after Election Day and criticized the Supreme Court last week. Mail-in voting has been expanded in many states during the coronavirus pandemic.

Trump has also demanded final results on Election Day, despite no state ever reporting its final presidential vote tally on the same day as the election. He told reporters Sunday that it was “terrible” that the results could not be known on the day of the election.

Trump’s remarks to reporters came as he landed for his third rally of the day in as many states. He is mounting an aggressive campaign schedule in the waning days of the campaign, traveling to multiple battleground states as he seeks to excite his supporters ahead of Election Day.

Democrats have led Republicans in early voting, while the in-person turnout on Election Day is expected to favor Republicans. Some in the GOP believe that Trump’s attacks on mail-in voting could backfire for the party. Trump currently trails Biden nationally and in most battleground state polling.