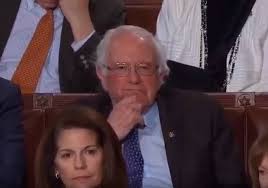 Last night the gold star award goes to a unknown camera man for panning to the Socialist lawmaker Bernie Sanders right after Trump proudly proclaimed that “America would never be a Socialist Country”. In this moment the Bernie Sanders scowled and looked haggard and mad. I couldn’t believe they actually got that shot in real time. It was glorious and while the coastal elites all hated to hear it, middle America does not want socialism. This was a bad look last night for the Democrats and I doubt the future optics are going to look much better.

“We stand with the Venezuelan people in their noble quest for freedom — and we condemn the brutality of the Maduro regime, whose socialist policies have turned that nation from being the wealthiest in South America into a state of abject poverty and despair,” Trump said Tuesday night.

“Here, in the United States, we are alarmed by new calls to adopt socialism in our country,” the president said. “America was founded on liberty and independence – not government coercion, domination, and control. We are born free, and we will stay free.”