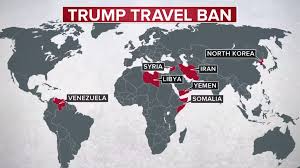 President Donald Trump’s travel ban executive order is proving to be one of his most effective pro-American immigration policy initiatives, stopping nearly all legal immigration from countries designated as sponsors of terrorism.

Newly released data from the State Department reveals that Trump’s constitutional travel ban on eight foreign countries, designated as either dangerous or sponsors of terrorism, has warranted big results.

The travel ban, State Department data finds, has reduced legal immigration from the eight foreign countries by about 80 percent, compared to 2016 when the ban had not been implemented yet. Six of the eight countries included in Trump’s travel ban have either sponsored Islamic terrorism in the past or have major issues with terrorism.