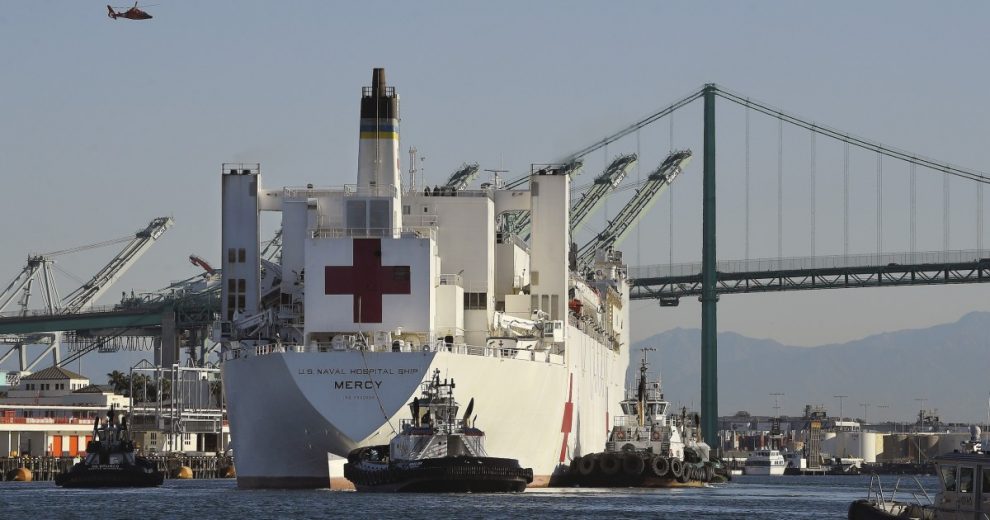 An engineer deliberately ran a train off the tracks at high speed near the Port of Los Angeles in an attempt to crash into the USNS Mercy hospital ship, prosecutors say.

The Pacific Harbor Line train derailed Tuesday, running through the end of the track and crashing through barriers, finally coming to rest about 250 yards from the docked naval ship.

Federal prosecutors allege train engineer Eduardo Moreno, 44, of San Pedro intended to hit the ship, saying he thought it was “suspicious” and did not believe “the ship is what they say it’s for.'”

The train crashed into a concrete barrier at the end of the track, smashed through a steel barrier and a chain-link fence, slid through one parking lot and then a second lot filled with gravel and hit a second chain-link fence. It came to rest after passing under a ramp leading to the Vincent Thomas Bridge. The train remained in that position Wednesday.

No one was injured in the derailment, but the train leaked fuel that required a hazmat response.

Authorities say Moreno admitted to crashing the train intentionally, but said he did not plan it out in advance. It is believed that he acted alone.

He allegedly made statements to a CHP officer that included “You only get this chance once. The whole world is watching. I had to. People don’t know what’s going on here. Now they will.”

Officials say video from inside the train’s cab shows Moreno holding a lighted flare during the incident.

Moreno has been charged with one count of train wrecking, according to the U.S. Attorney’s Office. The charge carries a maximum penalty of 20 years in federal prison.

The Mercy arrived at the Port of Los Angeles this weekend.

The Navy hospital ship was brought in to handle non-coronavirus patients, to help ease the burden of local hospitals that are surging with COVID-19 cases.

The ship has about 1,000 hospital beds, with some 800 active-duty doctors, nurses and medical staff on board. It is expected to stay in Los Angeles at least until September or until it is no longer needed.