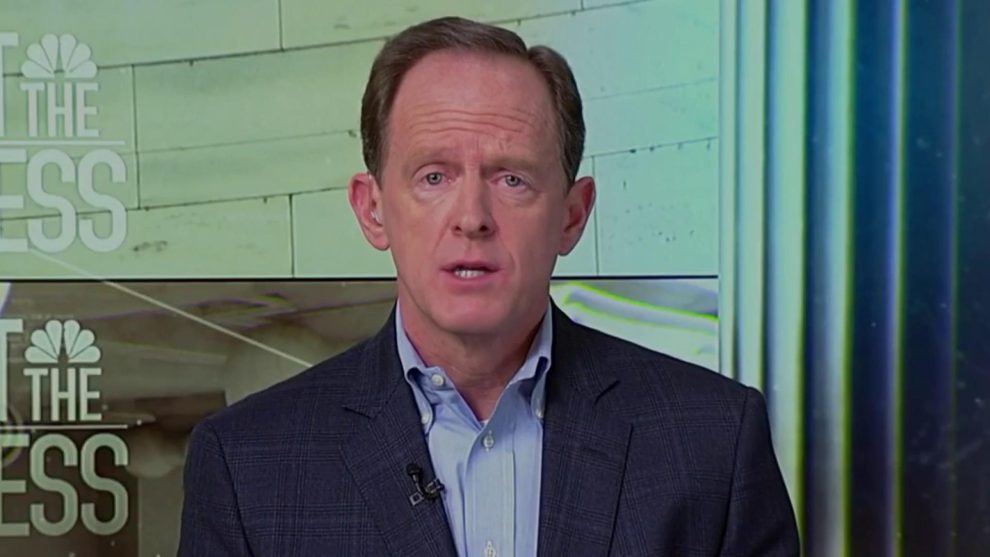 Senator Pat Toomey (R-PA) said Sunday on CBS’s “Face the Nation” that he hoped at least half of his Republican colleagues in the Senate would vote for the gun package he was currently negotiating.

MARGARET BRENNAN: Well, we see overwhelming support in our CBS polling for background checks, which is why it’s interesting that it’s difficult. There was a Republican congressman in the state of New York, I’m sure you heard about this. Chris Jacobs. He represents a district around Buffalo where there was an awful mass shooting just a few weeks ago, he dropped out of his reelection race. After- seven days after he publicly endorsed a Federal Assault Weapons Ban and limits on high capacity magazines. This is what he had to say.

REP. CHRIS JACOBS ON TAPE: We have a problem in our country, in terms of both our major parties. If you stray from a party position, you are annihilated. For the Republicans, it came- it became pretty apparent to me over the last week that that issue is gun control. Any gun control.

BRENNAN: Do you agree with him?

TOOMEY: No, I don’t. I think there’s a wide range of opinions among elected Republicans just as there are among Republican voters across the country-

TOOMEY: –in my case, I wrote a bill with Senator Manchin and advocated for expanding background checks in 2013, as you pointed out, again in 2015–

BRENNAN: –right, but you couldn’t get enough Republicans to vote with you to get it passed–

BRENNAN: Well, excuse me, I’m sorry, my voice. The President himself has campaigned on this idea that he can be a deal breaker- broker. Does he need to get involved? Or does the involvement of the president lessen the chances of success here?

TOOMEY: Yeah, the problem is I think the President might have been a president who would reach across the aisle try to bring people together. But he’s chosen not to take that approach. Since day one, he has sided with the far left of his party and really not reached out to Republicans. He gave a speech on this topic where he advocated policies that he knows for sure have no chance of passing the Senate probably couldn’t even get 50 votes, and hold the Democrats much less get the 60 we would need. So once again, the President is not being very helpful. I think at the end of the day, this is going to come down to whether we can reach a consensus in the United States Senate. There are intensive discussions underway. It includes people who have not been engaged on this issue in the past. I can’t certainly can’t guarantee any outcome. But it feels to me like we are closer than we’ve been since I’ve been in the Senate.

BRENNAN: So you can get four other Republicans to stand with you, the six who are negotiating?

TOOMEY: My hope is we’ll get a lot more than that. My hope is we’ll get at least half the Republican conference. You know that that’s, that should be the goal here. We’re going to have to be realistic about what can do that. Senator Murphy alluded to the idea that it’s not going to be everything. Certainly the Democrats would like. We’ll- we’ll see where it ends up.

BRENNAN: Is there a risk that the Republican Party becomes associated with gun violence, if you can’t get those votes?