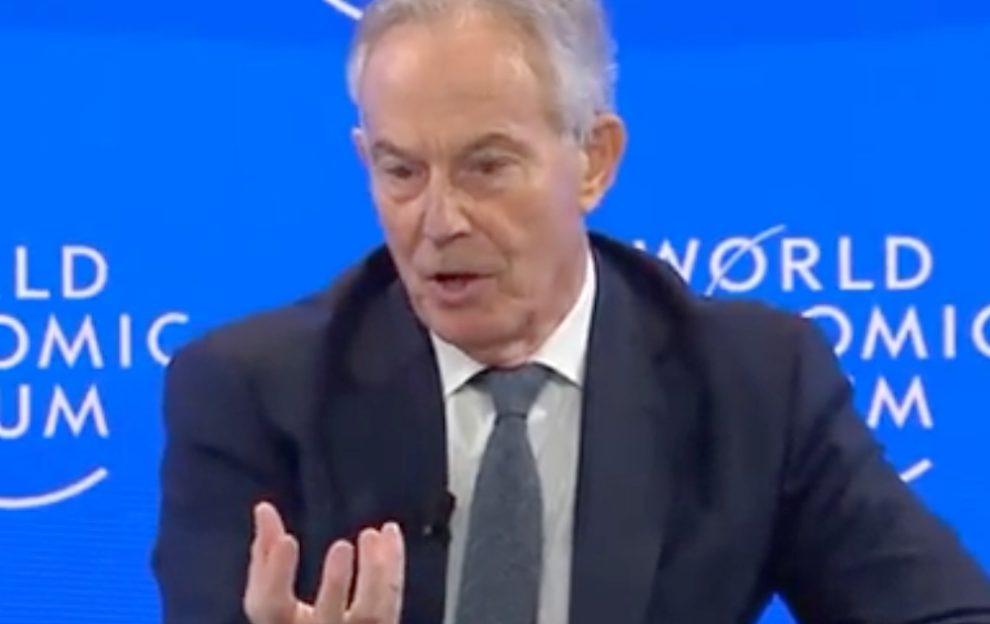 Former UK Prime Minister Tony Blair called for a “digital infrastructure” to track vaccination status at Davos 2023. A conference hosted by the World Economic Forum (WEF) is indeed an appropriate venue for Blair’s most inappropriate demand, since WEF previously released its plan for a digital ID required to do or buy anything. “You need to know who’s been vaccinated and who hasn’t been,” Blair exclaimed. “You’ve got to have the proper digital infrastructure.”

WEF’s digital ID would essentially be a social credit score, as the ID would be required to access social media and government benefits, vote, open bank accounts, book travel, shop, access healthcare and insurance, own electronic devices, and make online purchases, among many other applications. If you want to know how that turns out, look at Communist China. WEF has already partnered with the Dutch and Canadian governments to roll out a digital ID, and Tony Blair seems to be ready, willing, and eager to assist WEF as well.

Speaking during a Jan. 19 panel ominously titled “100 Days to Outrace the Next Pandemic,” Blair excitedly explained how COVID-19 proved the need for a digital database to track vaccination, and whined that most countries (rightly) believe the worst of COVID-19 is behind us. But the fact that Blair kept insisting there will be many vaccines in the future that everyone needs to take raises the question, does he know something we don’t know?’

“There is an ongoing challenge, an opportunity, and I think is not just about COVID. It’s about the fact that we are going to have a whole slew of new vaccines, injectables, that are going to deal with some of the worst diseases in the world, that give us the opportunity to make big changes in the—in the health of the world. And if you want the politicians to focus, they need to think, look, this is coming down the tracks.”

Time for another pandemic? Vaccines worked so well against the last virus, too. The majority of those who die from COVID-19 are vaccinated, a new COVID variant is more likely to infect the vaccinated, and the vaccines are now tied to very worrisome side effects like myocarditis and cardiac arrest. Too bad there wasn’t a vaccine against globalism.

“[Blair:] The second thing they need is to focus on the—on the opportunities to change healthcare that have arisen as a result of our experience of COVID. Because you know, when all’s said and done, it was still a pretty remarkable operation. By the way, you know, CEPI did a fantastic job, and you guys deserve a lot of congratulation for it.”

Blair in the latter sentence was speaking to fellow panelist Richard Hatchett, CEO of the Coalition for Epidemic Preparedness Innovations (CEPI). I discovered in June 2021 that CEPI was not only founded by the Bill and Melinda Gates Foundation and the Wellcome Trust (both partners of WEF) at WEF’s Davos 2017, but that CEPI had a Scientific Advisory Committee member, Dong Xiaoping, from the Chinese Center for Disease Control and Prevention (CCDC). The CCDC is not only an official arm of the Chinese Communist Party (CCP) government, it was responsible for overseeing the lab from which COVID-19 escaped in Wuhan. While Dong Xiaoping is no longer on the committee, according to the CEPI website, George Gao now is. George Gao is the ex-head of the CCDC who led CCDC both before, during, and after COVID-19 surfaced and spread around the world. China’s COVID-19 policies were so tyrannical that they recently sparked nationwide protests.

Furthermore, as I noted at the time, CEPI announced in March 2021 a $3.5 billion investment case that included a goal of reducing vaccine development timelines to a mere 100 days. Just think of the monetary return on having a new vaccine to market every 100 days! All in all, I really don’t think CEPI is to be trusted.

Blair is unphased by CEPI’s sketchy ties, but he did say he wishes Africa had “one system, one standard” to distribute more vaccines and treatments in the continent. African countries had the least uptake on the COVID-19 vaccines — and, interestingly, low rates of death (especially compared to the United States) from COVID that mystified first-world scientists. There wouldn’t be a connection, would there? Not to mention the fact that there have been scandals tied to such as the World Health Organization (WHO) before, when vaccines were used to sterilize unwitting women in Africa. There’s a reason that Africans distrust European and American vaccines — and it’s frankly disgusting that Tony Blair thinks he has the right to complain that African countries aren’t rushing to get vaccines. Go back to England, Blair. The age of imperial colonialism is over.

”I[Blair:] think there’s a huge impetus now for a national digital infrastructure. Digitization in healthcare is, I think, one of the great game changers, you know. We should be helping countries to develop a national digital infrastructure, which they will need, with these new vaccines … So I think if you want to keep the political focus, and I agree it’s vital that you do, you’ve got to show people that this is a continuing issue.”

But though that ended Blair’s first round of commentary, the former prime minister wasn’t done. He doubled down on his call for a digital vaccination database:

”You need to know who’s been vaccinated and who hasn’t been. Some of the vaccines that will come on down the line will be multiple—they’ll be multiple shots. So you’ve got to have—for reasons to do with healthcare more generally, but certainly for a pandemic or for—for vaccines, you’ve got to have the proper digital infrastructure. And many countries don’t have that, in fact most countries don’t have that.”

🚨BREAKING — Former UK Prime Minister Tony Blair Calls For A Digital Database To Monitor Who Is Vaccinated And Who Is Not For A Future “Pandemic” During Live Broadcast At Klaus Schwab's World Economic Forum pic.twitter.com/ApzIP1BN6S

The vaccines will be legion! Again, what does Blair know that we don’t know? And why on earth does he think governments or extra-governmental entities like WEF have the ability, let alone the right, to mandate vaccines and track who gets them? Government has no business being involved in medical care, period. It certainly doesn’t have the right to create a database to track who takes a certain treatment — that’s an individual decision, and it shouldn’t involve any national digital infrastructure.

Pfizer CEO Albert Bourla was on the same panel as Blair. Rebel News reporters caught Bourla walking around Davos and asked him several questions, including if he should apologize for the ineffectiveness of his company’s COVID-19 vaccine and how much money he personally made off Pfizer’s highly lucrative shots. Bourla merely sped up and refused to respond to a single question, though the reporters followed him for several minutes, asking. As PJ Media’s Ben Bartee noted, a Pfizer executive recently admitted the company never tested its COVID-19 vaccine for effectiveness in preventing transmission of the virus post-vaccination.

But why worry about effectiveness? Vaccines are too perfect of an opportunity for Blair and his WEF cronies to demand a digital ID and social credit score for all.