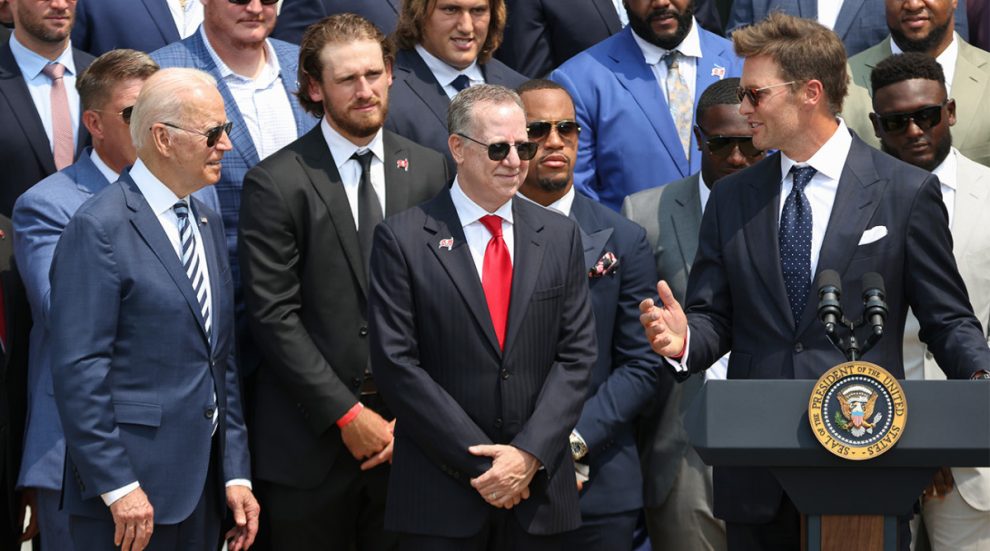 Protests against the national anthem by coddled multimillionaires, absolutely unnecessary announcements about sexual preferences followed by journeymen players, and even worse woke statements by the league’s brass have done their part to alienate Americans from the real national pastime.

And on a victory visit to the White House on Tuesday, Tampa Bay Buccaneers quarterback Tom Brady — the Breck Girl with the downfield bomb — did his part to keep the damage going – and make a mockery of millions of Americans in the process.

Brady was visiting 1600 Pennsylvania Ave. to celebrate his seventh Super Bowl victory – this one with the Buccaneers in February.

“Not a lot of people, you know, think that we could’ve won,” Brady said, with his trademark preppy smirk. “In fact, I think about 40 percent of the people still don’t think we won.”

Brady: Not a lot of people think we could’ve won. In fact, I think about 40% of the people still don’t think we won
Biden: I understand that pic.twitter.com/0yNlu3d3Cn

“Do you understand that, Mr. President?” Brady asked.

The yuks were a reference, of course, to the lingering doubts about the legitimacy of Biden’s election in 2020 – doubts any sane person would have to entertain after watching the mainstream media let itself be pimped by the Democratic Party throughout the campaign season, and seeing the indisputably strange results come in for an election marred by a coronavirus pandemic and Democratic chicanery.

The reality is, countless millions of Americans have grounds to believe the 2020 election was fixed in Biden’s favor – and jokes about it on the White House lawn aren’t going to change that. (And contra Tom Brady’s joke, that might be quite a bit higher than “40 percent”.)

Brady then went on to apparently make light of even more legitimate concerns about Biden’s obviously failing mental capacities.

“We had a game in Chicago where I forgot what down it was,” Brady said. “I lost track of one down in 21 years of playing and they started calling me ‘Sleepy Tom.’ Why would they do that to me?”

Again, the yuks went up as Biden gave an exaggerated reaction. Because nobody understands what it’s like to be unfairly maligned for mental slips more than the 46th president of the United States, right?

Well, it must be tough following the news while being an NFL superstar and everything, but even Brady should know Biden’s mental mistakes go well beyond forgetting the game situation on a Thursday night at Soldier Field.

Biden’s strange mannerisms, speeches that wander into nonsense, or just plain brain freezes are an integral part of his public image. They were common long before the election — so common they were no doubt a large part of the reason he spent most of the campaign in a basement.

This isn’t a question of political preferences. The fact that the man in control of the executive branch of government, the man who controls the American armed forces, has such questionable control over his own mental processes isn’t something to joke about.

It would be easy to chalk up Tuesday’s White House appearance as simply one more reason to despise Brady. Really easy. Among the tens of millions of NFL fans who don’t favor the Bucs or the New England Patriots, Brady could well be the most unpopular player in the league’s history.

It’s more than that, though. It’s another indication for Americans who supported and still support former President Donald Trump that the country’s elite either don’t know or don’t care about their feelings for the country.

But it’s also, clearly, one more reason to dislike Brady.

A great athlete, of course, he’s also known to be a poor sport. A guy who has trouble shaking a victorious opponent’s hand obviously never learned the most important lesson in athletics, and in leading a moral life. (It starts with, “It’s not whether you win or lose …”)

With Tuesday’s visit to the White House, he didn’t help his popularity any.

The NFL has more than its share of self-inflicted wounds lately (the “black national anthem,” say).

It didn’t need Tom Brady adding to them.

See also  Even Adam Schiff Is Flummoxed When Asked Why They Waited 18 Months if FBI Raid Was so Necessary
→ What are your thoughts? ←
Scroll down to leave a comment: