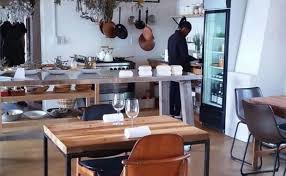 A tiny beach restaurant in an isolated South African fishing village was named the best in the world on Monday.

Chef Kobus van der Merwe, who did not begin to cook seriously until he was 30, forages every day for ingredients on the wild Atlantic shore of the Western Cape near his Wolfgat restaurant, where he also makes his own bread and butter.

The Wolfgat — whose six mostly female staff have no formal training — opened just two years ago in a 130-year-old cottage and cave on the beach at Paternoster.

Its seven-course tasting menu costs the equivalent of 53 euros ($60), a fraction of what you would pay at a top Paris table.

But its humble setting, and Van der Merwe’s belief in sustainable, back-to-basics cooking won over the judges of the inaugural World Restaurant Awards in the French capital.

The 38-year-old, who can feed only 20 people at a sitting, told AFP, “I don’t feel worthy. It’s a big title. My staff who go out every day gathering herbs, succulents and dune spinach, should be here… It’s their baby.

See also  White House Declares 'Border Is Closed' As Migrants Stream Into US From Mexico
→ What are your thoughts? ←
Scroll down to leave a comment: