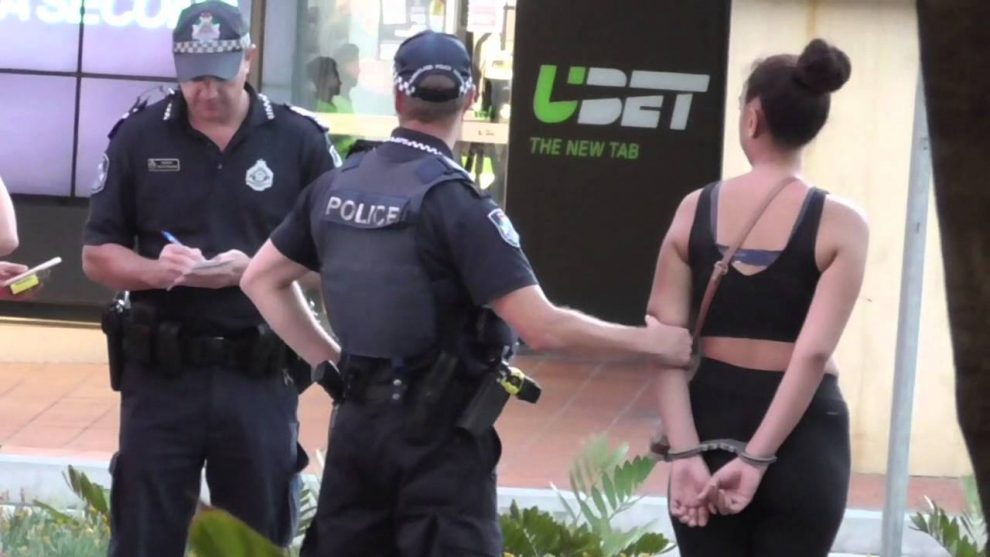 What started off with three women’s poor decision to “air dry” after taking a shower at a rest stop quickly escalated into a multi-phase car chase, threats against a trooper with a baseball bat, an attempt to run over an officer, all three women getting tased, and drug and alcohol charges.

“On Wednesday April 10, 2019, at approximately 11:15 AM, FHP units in Pasco county were dispatched to a suspicious persons call at the northbound I-75 rest area, south of State Road 54,” the alert reads. “Trooper Danielle Poulin arrived on the scene and observed three black females naked, who stated that they had showered and were ‘air drying.'”

According to one witness, the women were all standing out in the nude and applying suntan lotion, The Smoking Gun notes. While the three naked women responded to Officer Poulin’s initial question, they suddenly bolted.

“As Trooper Poulin attempted to gather information, the three subjects ran and got into a white 2009 Nissan Sentra and fled through the northbound rest area entrance (heading southbound) before turning back northbound,” Gaskins explains. “They then traveled north on I-75 toward State Road 52. Trooper Poulin initiated a pursuit; however, was canceled due to the pursuit not fitting FHP criteria.”

Though Poulin stopped pursuing, a citizen soon called in a “347” to report reckless driving, prompting another trooper, Christopher Brando, to respond. Seeing the Sentra “driving in the wrong direction briefly,” Trooper Brando initiated pursuit eastbound on State Road 52. Deploying StarChase projectiles (a tagging system that allows police to track a vehicle), Brando backed off and troopers were able to track the vehicle to a convenience store parking lot on the road.

They found the Sentra empty, the three women having entered the store (and apparently having put on clothes by this point). The situation got even more intense at this point.

“As the three females exited the store and got into the car, Trooper Ronald Paulin attempted to take one of the females into custody who had not made it back into the vehicle,” the alert reads. “While Trooper Paulin was attempting to arrest that subect, the driver purposely drove directly at Trooper Paulin who had to disengage and jump back to avoid being struck by the car.”

Now in the second phase of the high-speed pursuit, the Dade City Police Department came to help the troopers, deploying stop sticks, which deflated the Sentra’s right-side tires. “Due to the aggravated assault charges and the totality of the circumstance,” Gaskins underscores, Brando was then given approval to use his vehicle to nudge the Sentra enough to make it spend to a stop.

Trooper Brando’s actions successfully brought the chase to an end, but the women weren’t done resisting arrest, refusing to exit the vehicle. With the women refusing to get out, Paulin used his baton to “break out the vehicle windows.” But they still wouldn’t comply, having “interlocked their arms together in the vehicle.”

“As a result, all three were tasered, taken into custody, and transported to the Pasco County Jail,” the alert states.

The women have been charged with “fleeing to elude, resisting arrest, aggravated assault, indecent exposure, and marijuana possession,” The Smoking Gun reports. One of the women was also charged with a DUI.