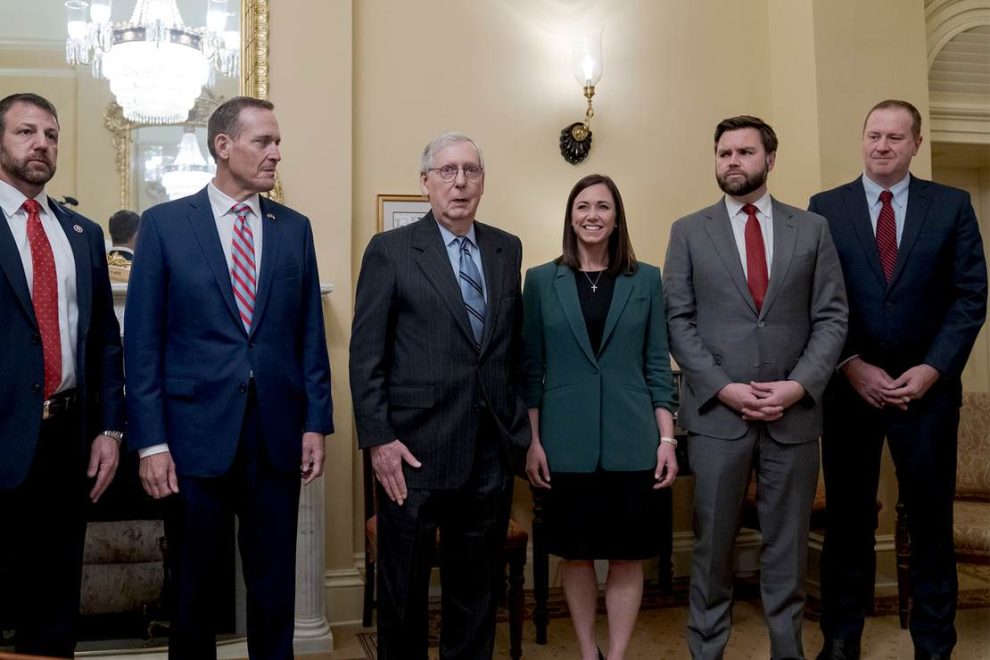 The leadership elections in the House and Senate were only the opening salvo in what promises to be a long, drawn-out struggle for the soul of the Republican Party, running at least through the 2024 presidential election.

You might consider Donald Trump to have fired the first shot when he announced his intention to seek the GOP nomination for president. While most observers see Trump’s announcement and effort to win the nomination as an uphill battle, others, like MyPillow maker Mike Lindell, see Trump’s candidacy as a coronation.

“After he announces today, I think [Florida governor] Ron DeSantis will end up just endorsing him,” Lindell, a rabid Trump cheerleader, told The Guardian early on Tuesday evening. “I can’t imagine anybody wasting the time, effort and money of the people. We need to unite our country and there’s only man who can do that and he’ll be up on that stage. Period.”

While that’s not likely, Lindell’s obvious devotion to Trump is matched by millions of others. Trump may not have the muscle in the Republican Party anymore, but candidates like Ron DeSantis have to approach Trump with care. And the riddle that DeSantis and any other candidate who wants the nomination must ask is: How to defeat Trump without losing the bulk of his devoted followers?

How Trump’s outsized influence on the nominating process will play out is only one question. There are other issues and other personalities for which Republicans are sharpening their tomahawks.

“You’ve gotta have a war every five or 10 years to get rid of the bad blood,” Sen. John Kennedy (R-La.) said, paraphrasing a line from The Godfather. “And then you start over.”

That war is very likely to get very bloody this week when the gay marriage bill comes to the floor.

McConnell celebrated his overwhelming support this week with a thumbs-up and a triumphant press conference, striking a positive tone as his super PAC pours more into next month’s Georgia Senate runoff. But the same-sex marriage bill that moved forward this week with 12 GOP votes simultaneously drove a new wedge, similar to the split it caused earlier this year among the also-feuding House GOP conference.

The marriage protection bill made everything even more “rough — a lot of our members were adamantly against it,” said one Republican senator.

That will be the biggest question facing McConnell and the new GOP Senators: how much, if at all, should the party cooperate with the Democrats? The debt ceiling bill is going to be a priority and Democrats will eventually need to deal with Republicans on the issue. But other Democratic priorities like funding for what’s left of the pandemic and Ukraine aid should meet fierce resistance from Republicans.

The bitter-end Republicans who believe in a scorched earth policy when serving in Congress grew their faction in the recently concluded midterm election. They won’t be a majority but they will almost certainly do their best to make Minority Leader McConnell and the Republican speaker — whoever that is — as uncomfortable as possible.

There won’t be much “healing” going on between members.

And a handful of ugly encounters this week will linger. After some senators asked for an accounting of the National Republican Senatorial Committee’s financial moves under Scott, the campaign arm chief fired back in a press release that under former chair Sen. Todd Young (R-Ind.), it had offered “unauthorized” bonuses to staffers at the end of 2020.

“I’ll answer any member’s questions as it relates to this. We operated the committee with great integrity, always above board and professional. So, that’s it,” Young said.

Trump is likely to exploit these divisions to his benefit once the campaign gets underway in earnest. It’s one more reason why those who count the former president out before the campaign has even begun will likely regret that move.