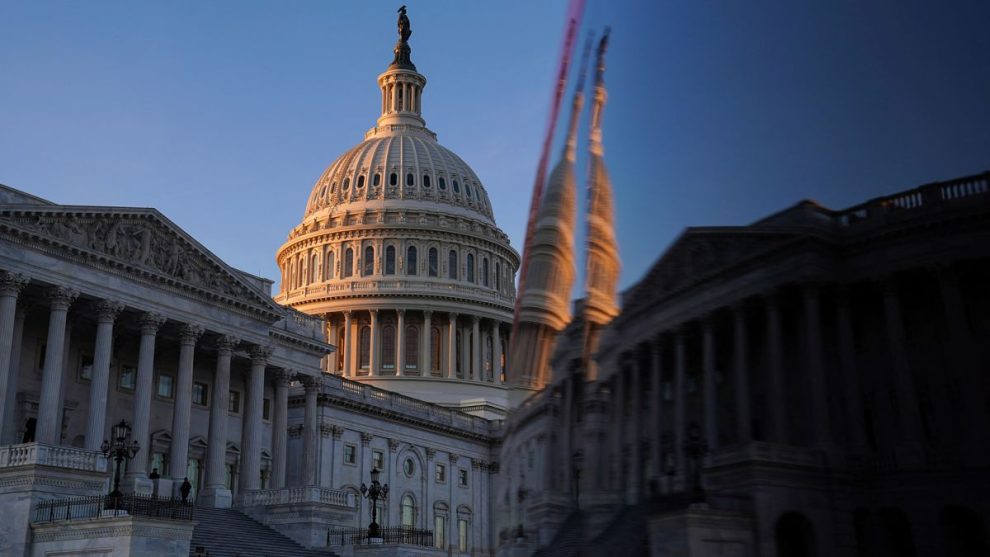 One week ago we looked at the latest consumer credit data where we found not one but two flashing red alerts:

First, the total amount of credit card debt hit a new all time high, which however was to be expected from one of the most consistently increasing series across all US economic data, and one which predictably is correlated to the US savings rate which is at all time lows.

Summarizing these ominous trends we concluded that…

The combination of record high credit card debt and record high credit card interest is nothing short of catastrophic for both the US economy, and the strapped consumer who has no choice but to keep buying on credit while hoping next month’s bill will somehow not come. Unfortunately, it will and at some point in the very near future, this will also translate into massive loan losses for US consumer banks; that’s when Powell will finally panic.

And while the big US banks are diversified enough – and flooded with enough reserves for now – to deflect attention from spiking charge offs rates on their balance sheets, even though as we discussed last week the credit loss provisions (a hedge against a spike in bad debt) across the Big Four banks did in fact jump the most in a decade (excluding the covid shock)…

… some of the smaller credit-card companies can no longer avoid the reality that the US consumer has finally cracked and a wave of defaults is coming.

Presenting Exhibit A: Discover Financial Services (DFS), a credit card issuer which traditionally targets to low to middle-income households, and which yesterday reported earnings that were so scary, Wall Street has uniformly dubbed them “shocking.” But while the bulk of the company’s historical results were actually not all that bad, it was its forecast that a stunner: in a presentation on its website, DFS forecast that its charge offs would climb as high as 3.9% this year (it gave a range of 3.50% to 3.90%) which is more than double the 1.82% net charge off rate it booked for all of 2022 and was about 100bps higher than the 2.8% consensus estimate.

Cutting to the chase, this is what the company’s historical and projected charge offs look like: 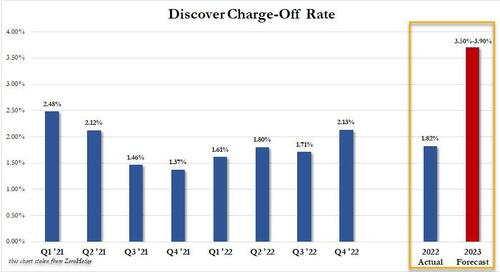 And since this is a net number, the gross number will likely hit 5% or more, a level not seen outside of painful recessions.

As Bloomberg explains, credit cards typically reach their peak loss rates about 18 months after origination. That means that Discover is expecting losses to tick up this year on accounts it started in 2021, which was a much bigger year for credit-card growth than 2020, when the pandemic forced the company to curtail new business. Starting last year, Discover began gradually tightening underwriting standards by offering smaller lines of credit to new customers, although the combination of a recession plus tapped out consumers will ensure a surge in charge offs for that and any one vintage.

Wall Street was predictably unhappy with this doubling in the company’s charge off forecast. Here is a summary of analyst reactions:

While DFS’s topline was stronger, it missed estimates mainly because of an increase in provisions due to outsize growth, along with higher operating expense growth
Analyst notes the “rapid” net charge-off (NCO) growth will likely be an issue across the industry due to outsize growth the past two years
Oppenheimer, Dominick Gabriele

“Consensus shocker” is DFS’s NCO guidance; even to reach the low end, it likely means charge-offs near 5%
Peers may not share DFS’s expected NCO normalization/ramp, yet it will likely make investors incrementally cautious on low FICO players, analyst says
Notes that management team is generally conservative and believes that some investors will see the guidance as too bearish
KBW, Sanjay Sakhrani

Says that it was a better-than-expected quarter but the outlook for net charge-offs is likely weighing on the stock
Notes that the forecast “likely contemplates a range of scenarios on the macroeconomic backdrop”
Adds that while investors are “nervous” about credit quality, the guidance isn’t “thesis- changing”
Citigroup, Arren Cyganovich

“We expect DFS shares to underperform peers on Thursday given a much higher expected 2023 net-charge off guide than the street”
Says rest of the company’s guidance was mixed but notes that “earnings materials lacked details of assumptions included in the guidance, which would appear to us to imply the beginnings of a mild recession assumed”
“While likely a positive long-term, investors will likely question growing consumer loans by double digits as we likely enter into a recession”
Chief Executive Officer Roger Hochschild tried to put some lipstick on the big, and told Bloomberg that “The losses are going up from artificially low levels,” adding that “overall, we feel really good about what we’re seeing in our portfolio” the market did not share his sentiment and DFS shares tumbled as much as 7.7%, their biggest drop in 6 months before recovering some losses. The company’s results also weighed on rivals Capital One and Synchrony, with all three credit-card issuers among the worst performers in the 67-company S&P 500 Financials Index.

As for the company’s charge off forecast, we can assume that it was made with the company not making a recession its base case. So throw a recession in, a tapped-out consumer with a record low savings rate which means most middle class spending is now funded on credit, and you have an extremely explosive mixture just waiting for a match.