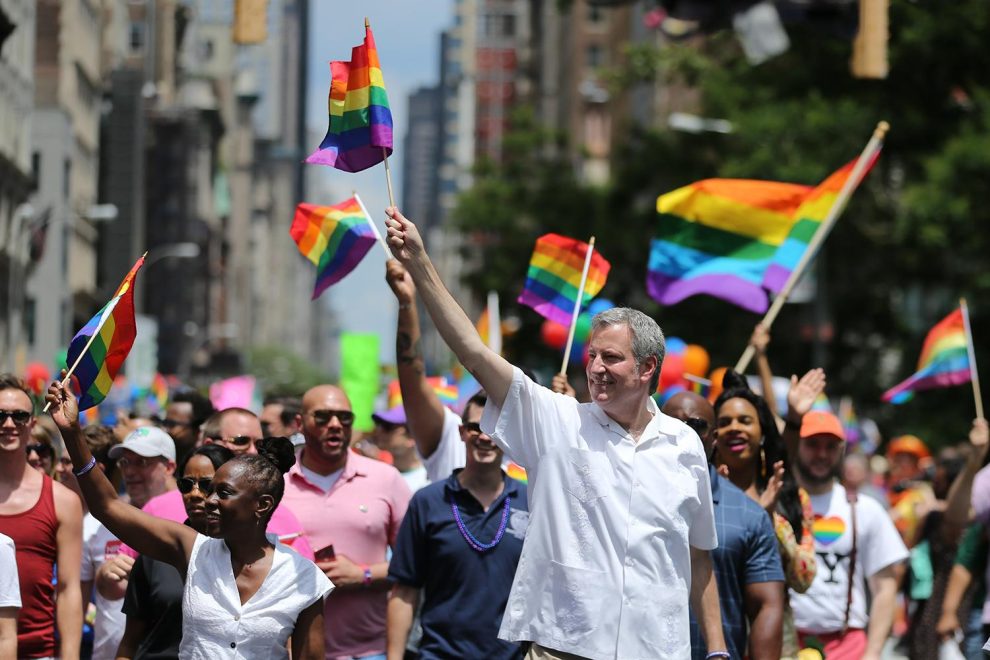 Well, gosh, the governor of New York has declared a public health emergency around monkeypox. Excerpt:

Gov. Kathy Hochul declared a state of emergency as cases of monkeypox continued to increase rapidly in New York.

The outbreak has been concentrated in New York City and reached close to 1,400 cases across the state on Friday, according to the governor’s disaster declaration.

The executive order authorizes state agencies to help localities respond to the outbreak. According to state officials, it extends the pool of people who are eligible to administer vaccines, adding emergency responders, pharmacists and midwives. The order also makes it easier for physicians and nurse practitioners to give people shots. And it requires providers to send vaccine data to the New York State Department of Health.

The governor said on Twitter that it would allow the state “to respond more swiftly” to the outbreak.

Does that mean the state is planning on shutting down sites where gay men — 98 percent of monkeypox victims so far — gather for sex, given that it has been mostly a sexually transmitted disease? What are you, a bigot?

Scott Gottlieb, former FDA commissioner, writes in the NYT that monkeypox is about to become another huge public health failure. His reasons for that grim conclusion are sound, but not once does he mention that the authorities could easily and effectively respond in part by shutting down gay sex clubs. Gay men cannot fail; they can only be failed by public agencies.

OUT: You must wear a mask everywhere you go. Your loved ones will die and you won’t be able to say goodbye to them. These sacrifices must be made.

IN: You can do whatever you want with your body. We don’t care who it hurts. Just have fun!

In one month, the annual Southern Decadence festival will be held in New Orleans. From the New Orleans daily paper:

Even as Louisiana receives thousands of doses of the monkeypox vaccines, officials say it’s likely not enough to ward off further spread of infection with the approach of the Southern Decadence Festival, the annual LGBTQ celebration that typically draws 250,000 people to the French Quarter over Labor Day weekend.

The state was allotted an additional 7,200 vaccines on Friday in addition to over 2,000 already shipped by the government. That’s enough to vaccinate about 4,600 people, considering every person requires two shots. But it leaves many still in need, especially ahead of a festival that packs the streets, bars and clubs.

Louisiana Gov. John Bel Edwards ought to ban this festival this year on public health grounds. Gov. Edwards oversaw a Covid response that shut down all kinds of public events out of fear of Covid spread — including Southern Decadence, in both 2020 and 2021. It was a huge economic hit to New Orleans, but public health came first, right? Why wouldn’t the Democratic governor shut down this gay male mega-festival, given how hideous monkeypox is, and how fast it is spreading? Other than fear of being called a bigot, I mean?

The friend in Baton Rouge who sent me that story comments:

So they can shut down Mardi Gras for a couple of years, but not the Decadence festival? What happens if it does start to spread outside of the gay community? What if somehow it spreads into BR and my kids get it? Is this a public health emergency or not?

We are seeing what it means to have gay male privilege. If you have followed all the messaging of the past ten to twenty years in the mainstream media and from American institutions, you know that LGBTs are not like the rest of us. As superior people, they have a right not to have to follow the rules. Again: they cannot fail, they can only be failed.

Take this NYT story about a male-to-female transgender murderer who declared he was a woman at some point after doing prison time for killing two women, and who is now on trial for killing another woman after his release. This freak has a lifetime of violence towards women behind him, according to state records. Excerpts:

The person before the parole panel in June 2019 was tall and slim, in far better shape than 81 years of life might have suggested. Mild and polite, the supplicant seemed nothing like the murderer who had spent decades in prison, first for shooting a girlfriend dead in 1963, and then for stabbing another in 1985, stuffing her corpse into a bag and leaving it in Central Park.

“I’m no longer that person,” the inmate told the parole board commissioners. Despite misgivings, they would rule in favor of release.

Two and a half years after leaving Cayuga Correctional Facility, Marceline Harvey was accused again, charged with killing Susan Leyden, 68. Parts of Ms. Leyden’s body were found in March inside a shopping cart in East New York, stuffed in a bag. In Ms. Harvey’s apartment, investigators found a bloody mop, a tub full of towels and a box for an electric saw.

A homeless shelter worker and people close to Ms. Leyden questioned whether, despite her gender identity, Ms. Harvey should have been placed in a homeless shelter for women, given her history of attacking and murdering them. Speaking from Rikers to The New York Post, Ms. Harvey referred to herself as having two personas: one, a violent male named Harvey Marcelin — the name she used for most of her life and is included in court records — and the other, a soft-spoken woman named Marceline Harvey.

See? Even when transgenders fail, they are far more likely to be failed. A story cannot just stand on its own; media outlets like the Times have to police the public for wrongthink.

If monkeypox becomes a permanent disease in American life — and especially if it passes over into the general population — because too many gay men couldn’t keep their pants up, and public health authorities were too cowardly to shut down gay sex festivals and gay sex clubs, the price of Pride is going to be a hell of a thing to pay.

I swear, if you could get monkeypox by going to church, Biden and Fauci would be right now sending in the National Guard to weld the doors of houses of worship shut like the Chinese did with Wuhan apartments in Covid.

UPDATE: Going to the fetish festival in San Francisco on Sunday? Heaven forbid they shut it down with a horrific epidemic raging among men who have sex with men. Here’s some advice from the San Francisco AIDS Foundation on how to navigate the festival. Excerpts: Douchie does NOT recommend staying home and chaste to avoid catching or spreading monkeypox. No sir! Here’s the first thing Douchie recommends: What is a “piggy party”? Well, a “pig,” in gay parlance, is someone who is hyper-focused on having sex, especially kinky sex.

You're going to end up covered in painful sores from accidentally touching the wrong shopping cart because this smug jackass was focused on the feelings of gay men and lecturing about "sex shaming" while gay men created a super version of monkeypox and saturated their community. pic.twitter.com/4zzNXO4vfC