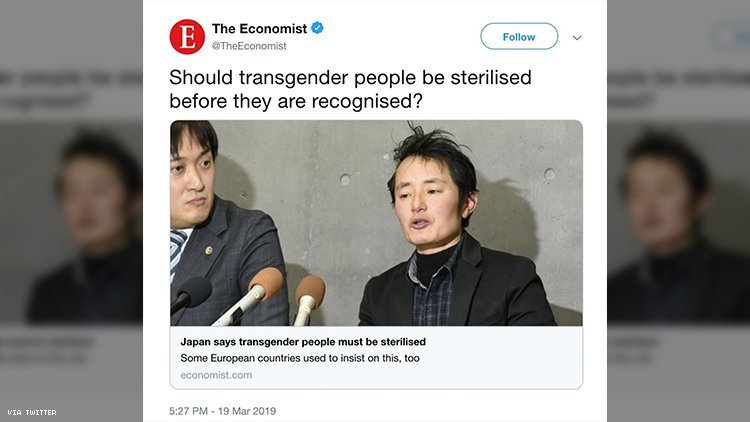 The Economist deleted and apologized for a tweet in which the magazine appeared to suggest that transgender people should be “sterilized.”

“We deleted an earlier tweet which mischaracterised our article on transgender rights in Japan. Here is that article, which remains unchanged,” the British magazine said in a tweet Tuesday evening.

“The article explores in detail a question that was put to Japan’s Supreme Court. Our tweets often use a line from the articles they link to. We were wrong to use the first line of this article out of its context. Sorry,” they added in an update Wednesday morning.

The original tweet had asked — without context — “Should transgender people be sterilised before they are recognized?”

Reps for The Economist did not immediately respond to a request for comment on the matter.

Far from a question from the magazine itself, the tweet linked to an Economist article about a debate currently unfolding in Japan over the issue, which the paper itself labeled “the unkindest cut.”

“Should transgender people be sterilised before they are recognised? Earlier this year Japan’s Supreme Court decided that the answer is yes,”read the opening of the piece, while also noting shortly after that “Human-rights groups say demanding irreversible surgery is outrageous. Although several Asian countries, including South Korea, have similar laws, Western countries that once also used to require sterilisation, such as Norway, France and Sweden, no longer do.”

The original tweet was immediately flagged on Twitter by prominent users, who attacked the magazine for asking the question.

“You know… f– @TheEconomist. F–ing sick of this f–ing garbage. How f–ing dare they? Really. F– them,” Media Matters editor Parker Molloy said in a tweet. “‘Should [literally any group of people] be sterilized before being [legally] recognized?’ There is absolutely no context where that is an okay question to ask, you genocidal s–weasels.”

It’s far from the first time the magazine has faced criticism over it’s coverage. Similar bad feeling ensued in 2016 when they reported that “the key to a successful marriage” was “not having daughters.”