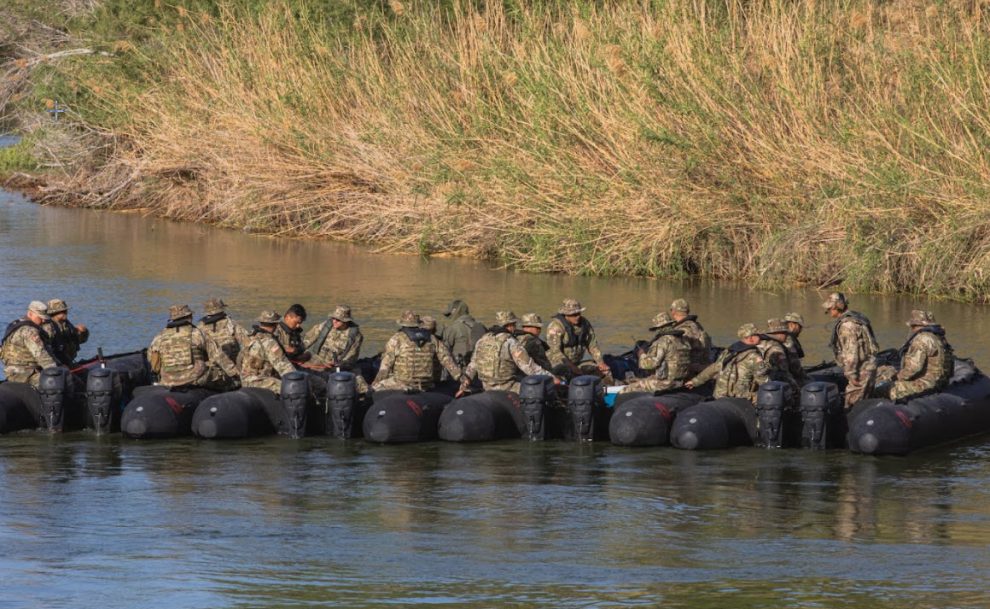 Texas Governor Greg Abbott ordered the Texas Military Department to begin mass migration response rehearsals along the state’s border with Mexico. The order comes in response to the Biden Administration’s plans to cancel the Title 42 coronavirus protection protocol, which is expected to drive the already record-setting number of 8,000 migrants to more than 18,000 a day, per a federal estimate.

“The National Guard will begin its first phase of mass migration rehearsals tomorrow [Thursday], to begin the preparation for what we are anticipating to be a potential mass influx of people coming across the border,” Governor Abbott said during a Wednesday afternoon press conference in Weslaco, Texas. “All troopers, and specially trained National Guard, will be equipped with riot gear in case of caravan violence like what we have seen occur in Mexico.”

The governor said federal officials estimate the ending of the Title 42 protocol could lead to more than 500,000 migrants per month attempting to cross the border from Mexico. Historically, about 60 to 70 percent of migrant crossings occur in the five Texas-based Border Patrol sectors. This would mean Texas needs to prepare for more than 300,000 per month — roughly equal to the population of Corpus Christi.

In a DHS contingency plan reviewed by Breitbart Texas, under a section titled, Critical Assumptions, officials noted “ICE ATD [Alternative to Detention] will be implemented on a greater scale.” The footnote for this paragraph adds:

Increased processing speeds, throughput, and the use of ATD is the quickest solution for processing FMUA [Family Unit Aliens] where T42 is no longer viable. However, relatively low percentages of FMUA reported for removal proceedings in the past once released on ATD. There is no evidence that a higher percentage of noncitizens will report for removal proceedings in the future if released, regardless of how expeditiously they are processed.

Further down in the Critical Assumptions section, officials stated:

Current pathways to removal will be limited. Component use of broadscale release mechanisms (i.e., Own Recognizance (OR) with issuance of a Notice to Appear (NTA), or parole and Altematives to Detention (ATD) with administrative tools are necessary to ensure humane and efficient treatment of migrants.

The footnote for this section clarifies that officials believe the traditional screening processes will become overwhelmed and DHS will focus on “increasing broadscale release techniques.”

Unofficial reports from Border Patrol revealed that more than one million migrants were apprehended so far this fiscal year. Official numbers reported by CBP show that between October 1, 2021, and February 28, 2022, Border Patrol agents apprehended nearly 137,000 FMUAs under Title 8 authority — an increase of approximately 36 percent over the prior year. An additional 53,000 FMUAs were processed under the sunsetting Title 42 authority and returned to Mexico or their country of origin. Most of these have been released into the public and, as noted above, most will not show up for ICE removal proceedings as required under the terms of their release.

An additional 53,000 FMUAs were processed under the sunsetting Title 42 authority and returned to Mexico or their country of origin. Once Title 42 is terminated, migrants in this category would add to the number being released.

“We are taking them to the United States Capitol where the Biden Administration will be able to more immediately address the needs of the people that they are allowing to come across our border,” the governor added. The governor signed the letter to TDEM Chief Nim Kid ordering the action.

“Texans have a backbone and the will to secure our border,” Abbott stated. “Two things that Joe Biden does not have.”

The governor added that the Biden administration is already busing released migrants from the border region to San Antonio.

“I’ve got a better idea,” he explained. “Instead of busing these people to San Antonio, let’s continue the ride — all the way to Washington, D.C.”

Abbott also ordered the Texas Department of Public Safety to immediately begin additional safety inspections of vehicles entering Texas from Mexico. DPS Director, Colonel Steve McCraw said those inspections would begin at 4 p.m. on Wednesday — shortly after the close of the press conference.

The governor said he will have additional announcements for responses to Biden’s border crisis next week.