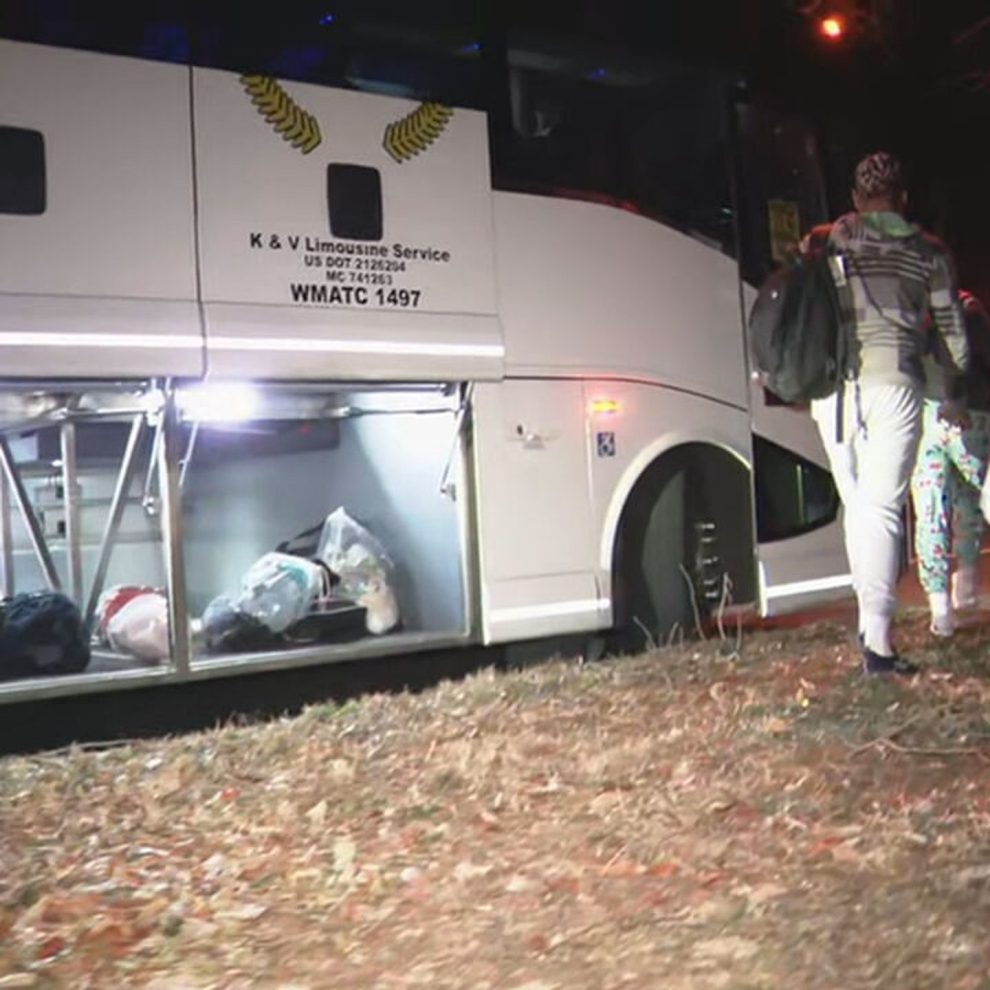 Three busloads of people who entered the United States illegally were bused from Texas to Washington, D.C. late Saturday, with one unloading its passengers near the U.S. Naval Observatory, the official home of Vice President Kamala Harris. The migrants (notice the new nomenclature—migrant used to be used to refer to legal border crossers) were sent at the behest of Texas Governor Greg Abbott as he tries to shake the Biden Administration into taking responsibility for the disastrous crisis at the border. He started sending migrants from border cities to the nation’s capitol in April, echoing similar moves by Florida Governor Ron DeSantis, who famously flew 50 illegals to the liberal enclave of Martha’s Vineyard.

The third and final bus of migrants of the night of migrants buses up to D.C. from Texas arriving, with Migrant Solidarity Mutual Aid Network taking them to a church: pic.twitter.com/Y65B8RnilZ

Abbott had foreshadowed his move with a Tuesday letter to the Biden Administration, warning that freezing temperatures in El Paso were a danger:

“Your policies will leave many people in the bitter, dangerous cold as a polar vortex moves into Texas,” Abbott wrote. “Texas has borne a lopsided burden caused by your open border policies.”

I sent a letter to President Biden demanding he deploy federal assets to our border as a polar vortex moves into Texas.

It is Biden’s constitutional duty to address this crisis. Texas will continue to step up in his absence.

But Abbott wasn’t done. He eviscerated the president, who has never once visited the border since he entered politics many, many decades ago:

“This terrible crisis for border communities in Texas is a catastrophe of your own making,” he wrote. “The need to address this crisis is not the job of border states like Texas. Instead, the U.S. Constitution dictates that it is your job, Mr. President, to defend the borders of our country, regulate our nation’s immigration, and manage those who seek refuge here,” he added.

The Texas National Guard is doing the federal government’s job at our border.

They’re working around the clock to stop illegal crossings into Texas, including on Christmas Day.

Thank your for protecting our state & our nation. pic.twitter.com/C4xCLAbCMB

Many have criticized Abbott’s busing and DeSantis’ Vineyard flights as “stunts,” and have angrily denounced the two governors for politicizing the issue. I take a different view: I think the moves are brilliant and force corrupt politicians to stop pretending the disaster simply doesn’t exist. Biden has exactly zero interest in the border or the daily devastation that occurs around the Rio Grande, so somebody has to make him care. The incessant whining from the Vineyard crowd about 50 immigrants—when Texas towns are dealing with millions a year—tells you all you need to know.

Border officials encountered an estimated 2.4 million illegals in 2022, shattering previous records. An unknown number were never “encountered” at all and just slipped into the country undetected.

As I wrote the other day in discussing the imminent demise of Title 42:

Joe Biden’s handling of the border has been a disgrace; millions have flooded into the country unhampered, horrible deaths and drownings are a regular occurrence, and sex trafficking is rampant. Democrats will tell you that their immigration policies are all about compassion, but they ignore the tens of thousands of lives shattered and the Wild Wild West nature of many border towns.

Homeland Security released a statement early Saturday that contains some of the most cynical government-speak garbage you will ever see:

“The Department of Homeland Security (DHS) continues to fully enforce our immigration and public health laws at the border. Individuals and families attempting to enter without authorization are being expelled, as required by court order under the Title 42 public health authority, or placed into removal proceedings,” the statement read. “As temperatures remain dangerously low all along the border, no one should put their lives in the hands of smugglers, or risk life and limb attempting to cross only to be returned.”

Why do I say it’s unbelievably cynical? Because even as the DHS is saying that, the government is actively advocating the Supreme Court to end Title 42, and it’s expected that that might happen within days (and unleash a tsunami of immigrants). If you’re a poor soul who’s made it this far and is now praying at the border hoping to start a new life, are you really going to turn around because of some pathetic statement from the DHS?