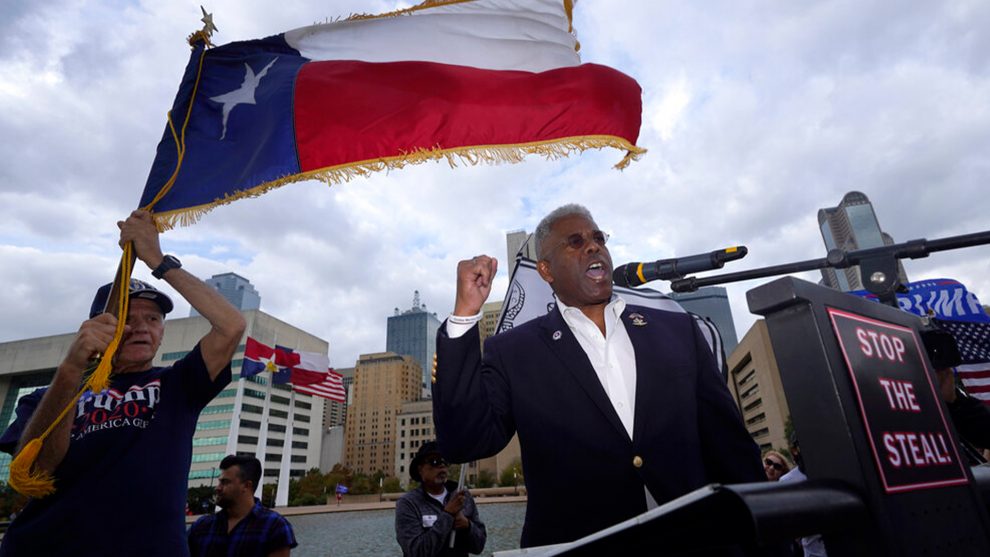 The chairman of the Republican Party of Texas suggested Friday that “law-abiding states” should form their own union after the Supreme Court’s rejection of a lawsuit seeking to invalidate votes from four battleground states.

“This decision establishes a precedent that says states can violate the US constitution and not be held accountable. This decision will have far reaching ramification for the future of our constitutional republic. Perhaps law-abiding states should bond together and form a Union of states that will abide by the constitution,” said the statement from Chairman Allen West.

The statement decried the Supreme Court’s ruling that rejected Texas Attorney General Ken Paxton’s lawsuit, which asked the high court for an emergency order to invalidate ballots from Georgia, Wisconsin, Michigan and Pennsylvania.

The @TexasGOP is out with a statement in the wake of the Supreme Court decision, all but calling for secession:

“Perhaps law-abiding states should bond together and form a Union of states that will abide by the constitution.” pic.twitter.com/4bB3gk88t4

“The Supreme Court, in tossing the Texas lawsuit that was joined by seventeen states and 106 US congressman [sic], have decreed that a state can take unconstitutional actions and violate its own election law,” the statement continued. “Resulting in damaging effects on other states that abide by the law, while the guilty state suffers no consequences.”

The high court’s rejection of the lawsuit dealt a blow to President Donald Trump and his allies, who sought to overturn the 2020 election results by alleging that the four states unconstitutionally “revised their state’s election statutes,” according to the suit.

Trump filed a motion to intervene Wednesday, which is a request for him to join the lawsuit. More than 120 House Republicans and 17 states also supported the suit.

The lawsuit alleged that the four states cited the coronavirus pandemic in order to make changes to their election laws that violated federal law and that allowed for voter fraud to occur. It also asked the court to block the certification of the Electoral College votes and extend the Dec. 14 deadline, which would allow time to investigate election results.

“The Texas GOP will always stand for the Constitution and for the rule of law even while others don’t,” the statement concluded.