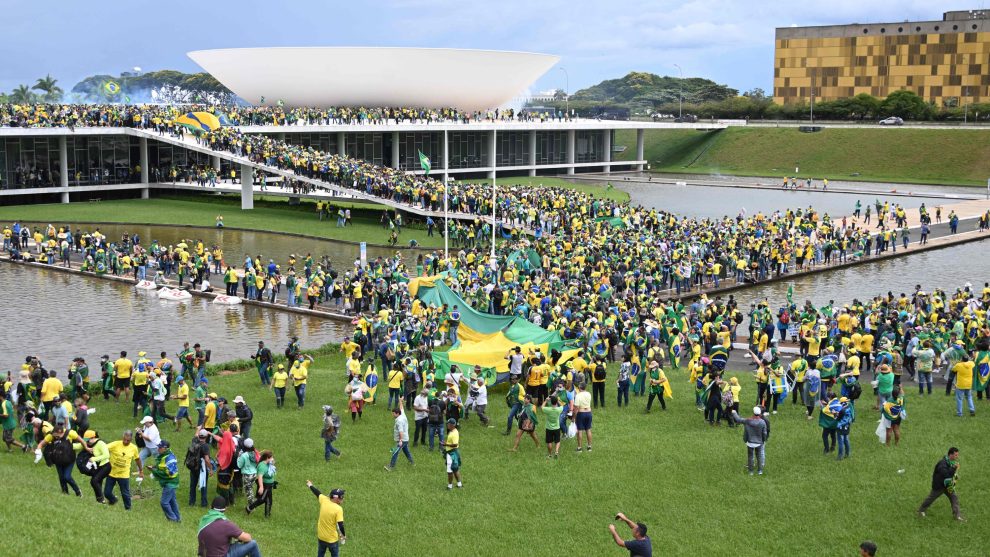 Massive crowd of Brazilians have descended on the capital of Brasilia to protest the stolen elections and are currently storming the National Congress. Police are using tear gas, Gunfire has been reported.

Reports put the number of protestors in the capital in the millions.

The brazilian have been protesting for 68 days now. And the supr br court just mocked us. Now people had enough. The brazilian congress is being invaded. People are not going to take a criminal in charge and clear rigged elections #BrazilianSpring pic.twitter.com/7S4jY85bTA

Protestors have broken through the barriers around the National Congress and are storming the building:

Protestors seem to have cornered Police on the roof, who opened fire before retreating:

THE NATIONAL CONGRESS BUILDING IS BEING TOTALLY OCCUPIED BY PROTESTERS
pic.twitter.com/tDKIMcIkiR

The presidential Palace has also been occupied:

Protestors have also stormed the Supreme Court, which is mainly responsible for the Communist coup and election fraud denialism:

Injured protesors were carried on stretchers, apparently with bullet wounds:

Communists don’t understand that shooting your citizens doesn’t quell their commitment to defend their freedom/democracy/republic. It spurs them on. They’re revolting against the judiciary tyranny of @alexandre & his technocratic coup to install @LulaOficial. They’ll take back🇧🇷 pic.twitter.com/6jdlnHIZ9W

Miltary Police were seen to be taking selfies with the pro-democarcy protestors:

Protestors were seen escorting a lone, stranded polcieman to safety:

Protests have reportedly spread all across Brazil, such as in Florianopolis:

Police were seen joining in the protests in Rio de Janeiro:

🚨#BREAKING: Some policemen of Rio de Janeiro refuse to disperse #Bolsonaro supporters and clearly express their support for the protesters. pic.twitter.com/VnkB3Y3dbh

See also  LeBron James Falls to the Floor After Ref Doesn't Rule His Way, Has Midcourt Meltdown in Front of Thousands
Share this article: