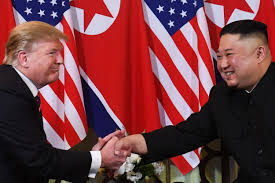 WASHINGTON – President Donald Trump abruptly ended a long-planned summit with North Korea’s Kim Jong Un on Thursday, acknowledging the two leaders did not reach an agreement that accomplished the U.S. goal of denuclearizing the Korean Peninsula.

“Sometimes you have to walk,” Trump told a news conference in Hanoi that was moved up by several hours and took place in the middle of the night in the United States.

Here are key takeaways from Trump’s two-day summit with Kim in Vietnam.

No deal on nukes

Trump began his second summit with Kim with an eye toward “denuclearization,” but one major sticking point between the two sides centered on what that term means. The White House had initially scheduled what it called a “signing ceremony” for Thursday, but Trump indicated Kim had not met U.S. expectations for a commitment to dismantling his nuclear program. The ceremony was cancelled and Trump moved up a scheduled press conference by two hours. He then departed Vietnam ahead of schedule.