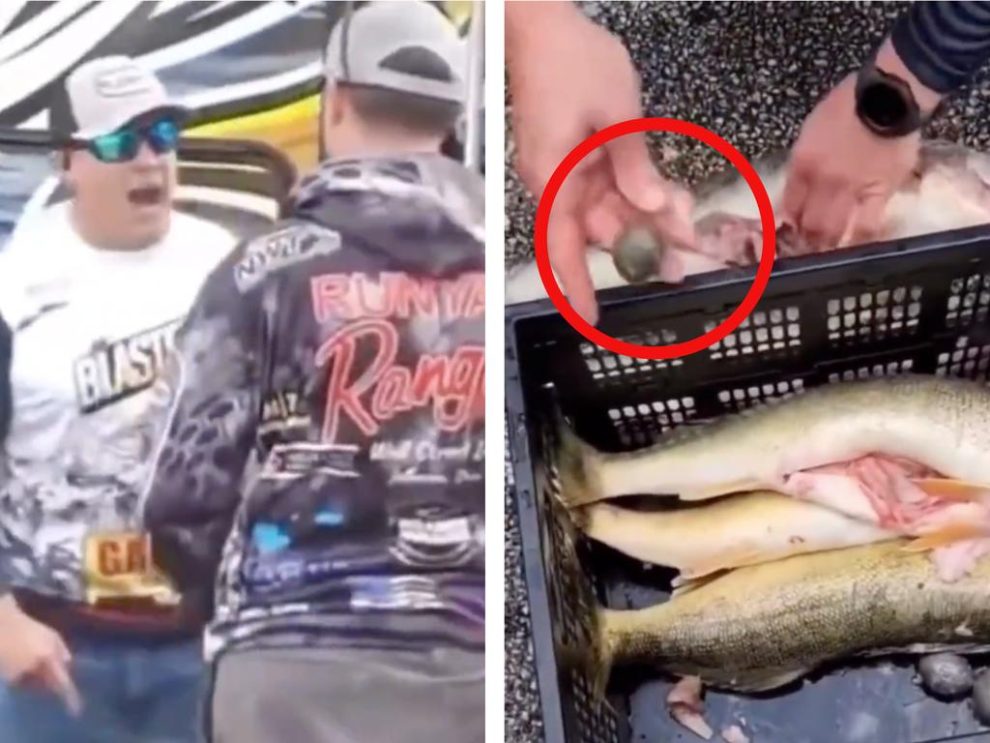 They were doing the weigh-in and they declared Jake Runyan and Chase Cominsky the winners based on the weight of the fish being the most.

But then the tournament director Jason Fischer must have had some suspicions because he decided to slice open the fish that the pair turned in. But that’s when he suddenly lost it and shouted that he had found weights in the fish.

The first video shows the moment of discovery, the second the reaction of Fischer and the other fishermen.

As Fischer cut open more fish, he found more weights as well as even some fish fillet that added to the weight as well. The reaction of the other fishermen contestants was something else. The two “winners” were lucky they weren’t lynched. Fortunately for them, the police arrived.

The duo had apparently, allegedly, and obviously, dropped these objects down the throats of their “catch” to enhance the weight and thus, improve their standing in the tournament. Fischer, a police officer in the Cleveland suburbs and a guy with an unassailable reputation in the Lake Erie walleye tournament ranks, was furious and threw them out of the tournament with a gesture reminiscent of the home plate umpire ejecting former New York Yankees manager Billy Martin.

The pair had won other high-paying tournaments. That’s why the other fishermen were furious and raised questions about whether this had happened in the past.

According to the Toledo Blade, there have been questions in the past about the pair.

The duo weighed in the apparent top catch in last year’s Lake Erie Fall Brawl and made claim for the more than $100K attached to that finish, but then were disqualified. When the tournament director at the time offered no explanation or clarity other than to say one of them had failed the polygraph, the tournament lacked the transparency it so desperately needed.

Runyon went to great lengths to proclaim, repeatedly, that they were innocent and had caught their fish by following all of the rules. He secured legal counsel and has been trying to sue the Brawl to claim their so-called winnings. [….]

After the pair were awarded the first place money in the Rossford event, several other competitors shared, off the record, their suspicions that something shady had taken place. Other anglers claimed that Runyon and Cominsky’s fish “looked old,” like these walleye had been caught prior to the start of the event and stashed in a live well.

Adding fuel to that charge was the additional factoid, laid out by several competitors in the event, that Runyon and Cominsky declined to donate their catch to local food banks, as most of the tournament fishermen did.

They were lucky to escape the wrath of the crowd. But I suspect they may be facing a reckoning soon.

Here’s a longer video from the weigh-in and the declaration that the pair won, to the denouement.