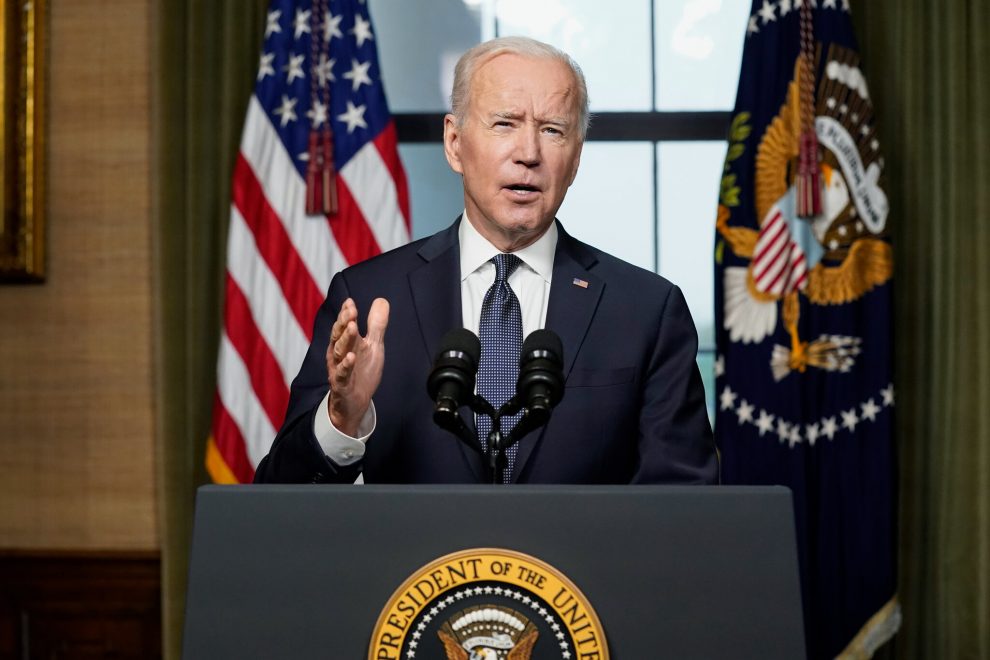 President Joe Biden continued to struggle with his response to the crisis in Afghanistan after days of hunkering down and seemingly waiting for the storm to blow over.

Faced with an outcry from the press over the president’s unwillingness to answer questions about the chaotic conclusion of the 20-year war in Afghanistan, Biden did an interview with ABC News host George Stephanopoulos at the White House to defend his actions.

The interview was the first time Biden took questions about the crisis in Afghanistan in eight days. But he did not appear prepared.

Biden snapped at Stephanopoulos for asking about Afghan people rushing a plane as it took off the runway in the airport in Kabul, some even falling to their deaths as it took off.

“That was four days ago, five days ago,” Biden replied sharply when asked about the images, trying to dismiss them entirely.

In fact, however, the incident occurred only two days ago, which Stephanopoulos did not press him on.

When asked what he thought about the images, Biden replied that he reacted by wanting the military to get in control of the situation — avoiding any sense of emotion about scenes that shocked the world.

When Stephanopoulos asked if he could have handled the withdrawal better, Biden denied it.

“No. I don’t think it could have been handled in a way that — we’re going to go back in hindsight and look — but the idea that, somehow, there’s a way to have gotten out without chaos ensuing, I don’t know how that happens,” he said.

EXCLUSIVE: Pressed on whether the U.S.'s exit from Afghanistan could have been handled better, Pres. Biden tells @GStephanopoulos, "The idea that somehow, there's a way to have gotten out without chaos ensuing—I don't know how that happens." https://t.co/iy02XgXkZ6 pic.twitter.com/Qn9d4dYS83

The president also appeared defiant against his critics in the interview, calling his decision to withdraw from Afghanistan a “simple choice” rather than a task that he and his team could have planned and executed much better.

“When you look at what’s happened over the last week, was it a failure of intelligence, planning, execution, or judgment?” Stephanopoulos asked.

“Look, it was a simple choice, George,” Biden said, arguing that he could have either stayed true to the withdrawal date of August 31 or extended it further with more troops.

But in recent days, Biden has already deployed 6,000 troops to Afghanistan to help facilitate the evacuation process as the security situation in the capital city of Kabul collapsed.

All of the conciliatory messages he shared with the public during his speech at the White House on Monday melted away.

When Biden was confronted with his assertion in July that the Taliban would not take over Afghanistan, Biden admitted that intelligence suggested the Afghanistan government would collapse by the end of the year.

“Well, the question was whether or not it — the idea that the Taliban would take over was premised on the notion that the — somehow, the 300,000 troops we had trained and equipped was going to just collapse, they were going to give up,” he said. “I don’t think anybody anticipated that.”

Under pressure from Stephanopoulos, Biden finally committed to leaving American troops in Afghanistan beyond the August 31 deadline if necessary, a commitment both his press secretary Jen Psaki and National Security Advisor Jake Sullivan refused to make during a press briefing on Tuesday.

Americans should understand that we’re going to try to get it done before August 31,” Biden said and added, “If we don’t, we’ll determine at the time who’s left.” And “if there are American — if there [are] American citizens left, we’re going to stay until we get them all out.”

Biden continues to struggle with criticism of his sloppy exit from Afghanistan, but the White House does not appear willing to put him back on camera to answer more questions about it.

On Wednesday, the president tried to refocus America’s priorities on the coronavirus pandemic, spending more time attacking unvaccinated Americans and Republican governors than reassuring Americans that he would get all citizens out of Afghanistan.

He walked out of the room after his speech, ignoring shouted questions from reporters who stood watching in disbelief.

The president has locked down his schedule for Thursday as there are no public events scheduled and no press briefings.

Despite Biden’s failure to address the controversy, he may be trying to squeeze another long weekend at his home in Delaware during the month of August.

A Federal Aviation Administration flight restriction notice suggested that Biden would leave the White House for Delaware on Wednesday and remain there until August 23.

But the president remained at the White House on Wednesday evening as his staff called a lid for the day.