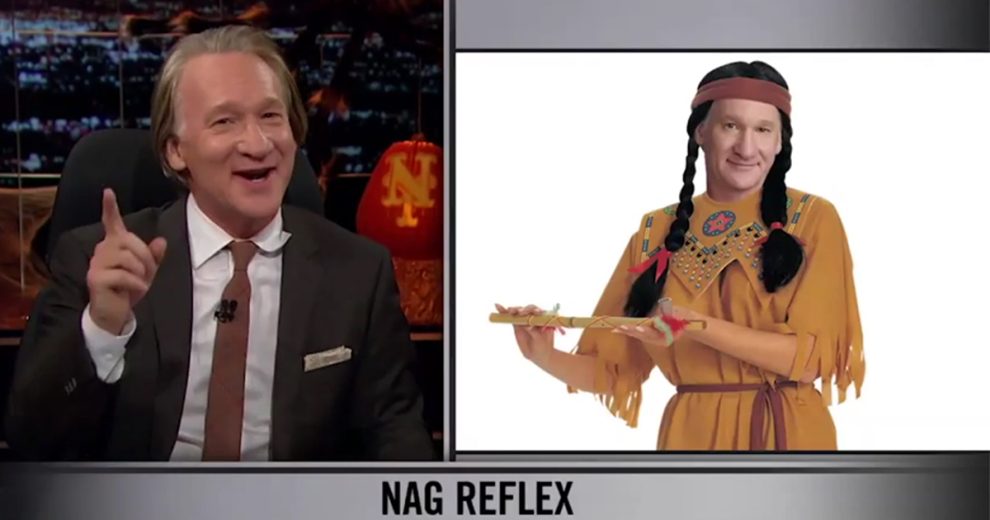 Comedian Bill Maher unloaded on the “scolds” he blamed for taking all the fun out of Halloween, arguing that people needed a holiday where they were allowed — and even expected — to be a little irreverent and throw the “rules” out the window.

Maher proceeded to go through a list of “problematic” Halloween costumes compiled by BuzzFeed, which he renamed “BuzzKill,” and explained that “problematic” had always been the entire point of the night of freedom that came before All Saints’ Day — which he said had been overtaken in recent years by “All Scolds Day.”

I’m so tired of a handful of emotional hemophiliacs on social media telling us what we can’t do on Halloween. And by the way, please put drugs in my candy. #AllScoldsDay🎃 pic.twitter.com/if9O8HQZTU

“New rule!” Maher began. “If Halloween is too much for your fragile sensibilities and you’re worried about seeing someone wearing something that’s on the forbidden costume list … just stay the f*** home.”

Maher went on to mock the idea that there were lists of irreverent costumes that people were warned not to wear … “lest a night of irreverent dress-up spiral into something that resembles fun.”

“Halloween is supposed to be outrageous! It’s a festival of the sacrilegious, a celebration of the grotesque,” Maher continued, adding, “Yet every year there’s a new list of offensive things we shouldn’t do on the day that’s all about being offensive.”

Rather than canceling the fun out of Halloween, Maher said he’d prefer to cancel November 1st: “All Scolds’ Day” — which he said was “when the good people announce which costumes the bad people wore.”

Reading from “BuzzKill’s” list, Maher began with serial killer Jeffrey Dahmer — “e-Bay has already banned selling it because otherwise it would be impossible to find a blond wig and aviator glasses.”

“I’m so tired of a handful of emotional hemophiliacs on social media telling us what we can’t do on Halloween. And by the way, please put drugs in my candy,” Maher added.

He went on to read a number of other “verboten” costumes from the list: Queen Elizabeth II (“too soon”), “characters outside of your race,” even Elvis. “You can’t dress up as Elvis?” Maher asked. “That’s an entire industry!”

“Have fun kids, and let your imaginations soar,” he mocked, adding, “Can I tell you something, kids? These are *all* great costumes. Listen to me, I’m your last connection to fun.”

“For f***’s sake, it’s Halloween — which is not just a fun holiday, it’s a necessary psychic release,” he added.

Maher concluded the segment by revealing his own costume — a Generation Z scold, complete with multiple masks and face shield, the leash for his emotional support animal, a “F*** the Patriarchy” t-shirt, and the stick he said was meant to “go up his ass.”