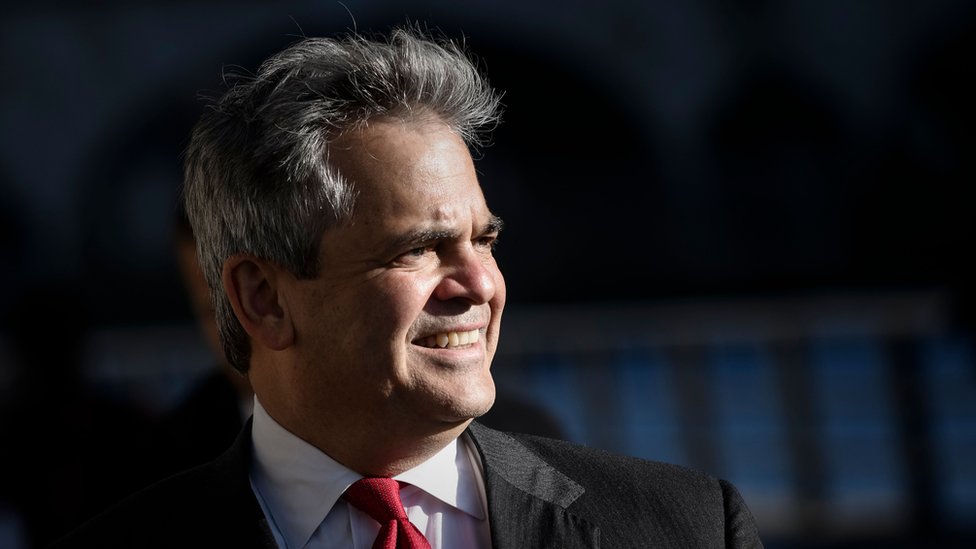 Steve Adler, leader of Austin, Texas, went on a family getaway to Mexico as he told people to keep indoors amid spiralling virus caseloads.

He recorded a video from the beach resort instructing residents back home: “This is not the time to relax.”

But Mr Adler, a Democrat, denied violating his own regulations.

What did the Austin mayor do?
He told the Austin American-Statesman, which revealed his trip: “There was no recommendation for people not to travel during that period of time.

“Someone could look at me and say, ‘He travelled.’ But what they could not say is that I travelled at a time when I was telling other people not to travel.”

According to the Austin American-Statesman, Mr Adler last month hosted an outdoor wedding reception with 20 guests for his daughter at an upmarket hotel in the city.

The mayor acknowledged to the newspaper that masks distributed to guests were “probably not” worn all the time.

The next day, the mayor and seven other attendees of the wedding boarded a private jet for the oceanfront resort of Cabo San Lucas, where they spent a week at a family timeshare apartment.

One night into the trip, Mr Adler addressed Austin residents in a Facebook video, giving no hint he was outside the city, reports the Austin American-Statesman.

“We need to stay home if you can,” he said. “This is not the time to relax. We are going to be looking really closely. We may have to close things down if we are not careful.”

What other cases have emerged?
A number of cases involving Democratic office-holders being accused of double standards on coronavirus rule-flouting have made headlines in recent weeks.

Democrats tend to be more in favour of broad virus-control measures than their Republican counterparts.

California Governor Gavin Newsom last month apologised after he was caught dining with lobbyists and members of the California Medical Association, all without masks, at a crowded table for 12 in a swanky restaurant in Napa Valley.

He initially claimed the meal at the Michelin-starred French Laundry, where some prix fixe plates go for $450 per person, took place outdoors. But photos emerged showing the space had a roof, three walls and another wall with sliding glass doors.

It has since emerged that one night after Mr Newsom dined at the French Laundry, San Francisco Mayor London Breed attended a birthday party for a socialite at the same restaurant.

The meal took place as Ms Breed was urging residents to stay at home and avoid socialising, reports the San Francisco Chronicle.

In other recent cases involving Democrats:

On Tuesday, the mayor of San Jose, California, Sam Liccardo, apologised for attending a Thanksgiving dinner with family members from five households – more than state regulations allowed
A delegation of California lawmakers jetted off to a resort in Maui, Hawaii, for a conference with lobbyists as state residents were being instructed to avoid nonessential travel
California Senator Dianne Feinstein – who has called for congressional coronavirus aid to be made conditional on states imposing mask mandates – was photographed at the US Capitol and at an airport without any face-covering
US House of Representatives Speaker Nancy Pelosi, also of California, was pictured without a mask inside a hair salon, breaking rules that only allow service outdoors, but she refused to apologise
Los Angeles County Supervisor Sheila Kuehl dined outdoors at her favourite restaurant — shortly after voting to uphold a ban on outdoor dining, which she said endangered serving staff
Chicago Mayor Lori Lightfoot defended her decision to get a haircut while barbershops and salons were closed under Illinois’ stay-at-home order. Ms Lightfoot had previously said “getting your roots done is not essential”
“Pass the potatoes, not COVID… Avoid travel,” tweeted Denver Mayor Michael Hancock last week from the airport en route to a family Thanksgiving in Mississippi
Washington DC Mayor Muriel Bowser violated her own Covid-19 travel advisory and quarantine requirements after going to Delaware to celebrate Joe Biden’s presidential victory. She defended the trip as “essential travel”
What’s the reaction?
In a rare alignment of viewpoints, the White House and liberal-leaning cable network CNN blasted Democratic politicians on Wednesday over the controversies.

In her monologue, CNN host Brianna Keilar said: “A number of Democratic leaders apologising, or reversing course, after multiple occurrences of ‘Do as I say, not as I do.’ They have been caught not following their own coronavirus guidelines.”

.@brikeilarcnn rolls the tape on Democratic officials caught not following their own Covid-19 guidelines:

"The past few weeks, brought into relief a pattern of leaders, failing to lead by example. Asking Americans to make sacrifices that they, themselves, are unwilling to make” pic.twitter.com/V6Xq9gRxrw

At the White House, press secretary Kayleigh McEnany ran a tape during a news briefing of similar instances.

“These images behind me,” she said, “make clear Democrats’ mindset: rules for thee but not for me.”

Press Sec @kayleighmcenany excoriates hypocrite Democrats who continue to break their own lockdown rules, forces media to sit in silence and watch video evidence on a loop

Meanwhile, in New York there was a mass protest outside a bar on Wednesday evening a day after its co-owner was led away in handcuffs, charged with trespassing on his own business premises after he sold food to plainclothes police officers in a sting operation.

According to Staten Island Live, an angry crowd of hundreds gathered outside Mac’s Public House in Staten Island chanting: “Lock up criminals, not Americans!”

Last month, New York Governor Andrew Cuomo came under fire after he announced plans to have his daughter and 89-year-old mother over for Thanksgiving, even as he told residents to avoid family gatherings.

Amid a backlash, his office later said he had cancelled the dinner.

More than 273,000 Americans have died from Covid-19, and almost 14 million have been infected.