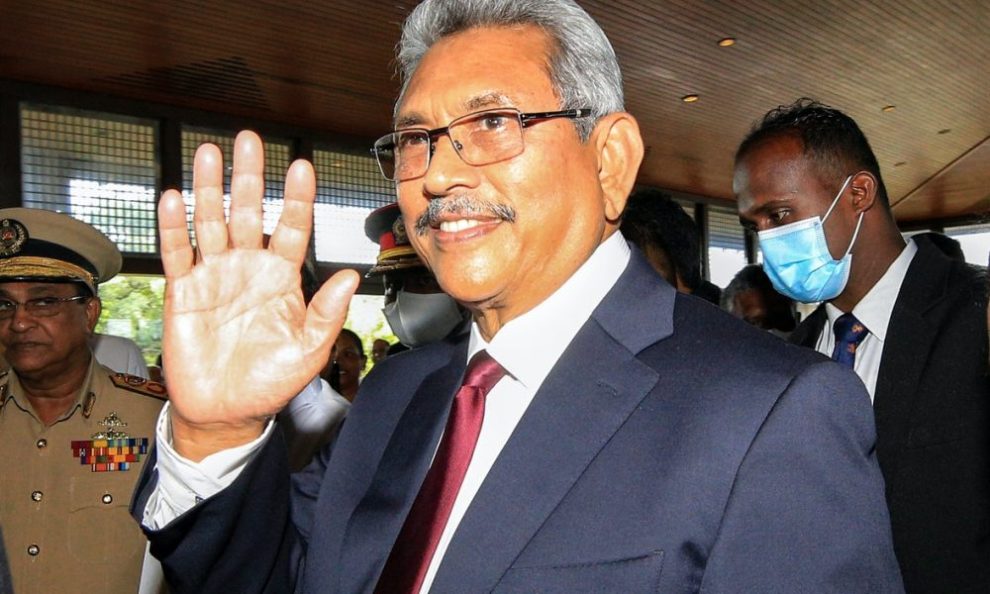 Sri Lanka’s embattled President fled the country on Tuesday, after protesters forced their way into the Presidential Palace and forced him and the Prime Minister to resign.

According to reporting from the BBC, President Gotabaya Rajapaksa arrived in the Maldives in a military jet at 03:00 local time. The President had previously confirmed that he would resign but fled the island nation before doing so — while in office he was immune from prosecution, and observers suggest that he likely wanted to escape the country before surrendering his legal immunity and opening himself up to arrest by a successor government. Rajapaska had been in hiding for several days after protestors stormed the palace.

His exile likely marks the end of a familial dynasty that dominated Sri Lankan politics for decades. Rajapaska’s brother, Mahinda, was lionized by many Sinhalese Sri Lankans after his government defeated Tamil separatists in 2009, concluding a long and gruesome civil war that wracked the multiethnic state for decades.

“It is no secret that the majority who voted for me then were Sinhalese,” Rajapaksa told parliament in 2020. “They rallied because they had legitimate fears that the Sinhala race, our religion, national resources, and the heritage would be threatened with destruction in the face of various local and foreign forces and ideologies that support separatism, extremism, and terrorism.”

Another brother, Basil Rajapaska, was the president’s minister and is believed to have fled the country as well; sources claim that he’s headed to the US. It is unclear who exactly will succeed the outgoing president. Under the Sri Lankan Constitution, the Prime Minister Ranil Wickremesinghe should act as president in the event of a presidential resignation, but at the behest of popular outcry he is resigning as well. The speaker of parliament, Mahinda Yapa Abeywardena, is the next likely candidate but is allied with the Rajapaska family and is quite possibly tainted in the eyes of the public as well. Various political parties in parliament have discussed forming a new unity government, but no details of the arrangement have materialized thus far.

The nation of 22 million faces a deep financial and economic crisis as inflation, shortages of food and power, and the bankruptcy of its own government have devastated its economy and people.

Many observers point to the recent ban on the importation of synthetic fertilizers as a catalyst of the crisis — in an effort to transition the nation’s agriculture to an ‘all organic’ model the government caused crop yields to drop by as much as 50% and wiped out hundreds of millions of dollars worth of agricultural produce, including the cash crop tea, and the dietary staple, rice. Global supply chain issues that have especially affected the global price of food and energy have exacerbated the dismal situation even further.

Sri Lanka’s agricultural sector had previously accounted for 70% of the nation’s exports.