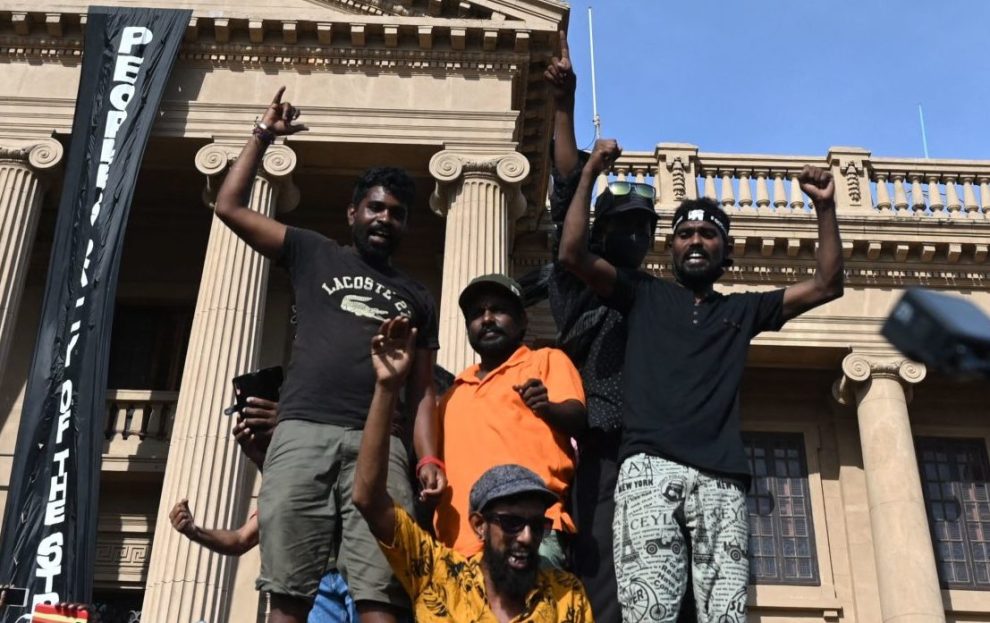 In Ernest Hemingway’s 1926 novel, The Sun Also Rises, Bill Gorton, a writer by trade, asks Mike Campbell, a Great War veteran from Scotland, “How did you go bankrupt?”

So it was for Sri Lanka, the island nation of 23 million.

Protestors in Sri Lanka retreated Thursday from the presidential palace and several government buildings they seized over the course of five months of unrest. Demonstrations against the country’s economic crisis have successfully forced President Gotabaya Rajapaksa’s resignation. Sri Lankan military personnel have reclaimed their footing in areas of government import, such as the Parliament complex, where security has been ratcheted up even further.

Economic growth rates in the country have been on the decline since before former President Donald Trump entered office here in the U.S. By 2019, the Asian Development Bank said the Sri Lankan economy was “a tale of two deficits.” The first deficit is a trade deficit, with imports regularly outpacing exports. The second, a budget deficit where government revenue lags behind expenditures, steadily built the country’s stock of debt.

To remedy these failings, the Sri Lankan government, led by the Rajapaksa family for the better part of the last two decades, attempted to court foreign investment in infrastructure projects to fuel economic growth, such as the Hambantota International Port backed by Chinese Belt and Road funds.

But these infrastructure projects haven’t been the boon to the Sri Lankan economy the government hoped. Abysmal economic growth partnered with low government revenues put Sri Lanka on a path to default.

Basil Rajapaksa, then the country’s finance minister and younger brother of the president and prime minister, enacted massive tax cuts in an attempt to resuscitate the Sri Lankan economy, but to no avail. The “gradually” portion of Sri Lanka’s decline continued.

Then came the “suddenly.” The Covid-19 pandemic, paired with the deadly Easter bombings of April 2019 that killed 260 people, crushed Sri Lanka’s tourism industry, which had brought in between three and five billion dollars per year and accounted for over a tenth of the island nation’s economy. In 2018, Sri Lanka welcomed 2.3 million tourists. In 2021, that figure had dropped a staggering 92.5 percent as the country attracted just 173,000 tourists.

To add insult to injury, the Rajapaksa government went forward with a ban on chemical-fertilizer imports in April of 2021.

Michael Schellenberger, author of San Fransicko and Apocalypse Never, wrote about the impact of the ban on importing chemical fertilizers on his Substack:

One-third of Sri Lanka’s farm lands were dormant in 2021 due to the fertilizer ban. Over 90% of Sri Lanka’s farmers had used chemical fertilizers before they were banned. After they were banned, an astonishing 85% experienced crop losses. The numbers are shocking. After the fertilizer ban, rice production fell 20% and prices skyrocketed 50 percent in just six months. Sri Lanka had to import $450 million worth of rice despite having been self-sufficient in the grain just months earlier. The price of carrots and tomatoes rose five-fold. While there are just 2 million farmers in Sri Lanka, 15 million of the country’s 22 million people are directly or indirectly dependent on farming.

Schellenberger also points out that Sri Lanka has one of the highest ESG scores in the world, with a 98 out of 100. A higher ESG score means a country or company has high “environmental, social, and governance” standards for its investments. The list of highly performing countries is laughable. Sri Lanka is sandwiched between Madagascar and Tajikistan in the rankings; Burundi and Rwanda take slots one and two on the list. Not so long ago, Elon Musk tweeted, “ESG is a scam. It has been weaponized by phony social justice warriors.” Maybe he was underselling it.

Maybe Rajapaksa saw something similar in the ESG tarot cards, too. Realistically, the ban was likely an attempt to limit chemical-fertilizer imports from draining the country’s currency reserves—dollars the country would need to pay back its debts. But that is not the talking point Rajapaksa chose. His ostensible justification for the ban was to stem purported adverse health effects caused by these fertilizers. It is a telling line. Get the green liberal internationalist monkeys off your back by going along with some of their climate demands, and you, your family, and cronies get to dominate a country for nearly 20 years with minimal Western pushback. Meanwhile, Chinese money keeps rolling in.

At least until it all comes crashing down.

As Schellenberger suggests, the ban led to massive food shortages. Rice production continued to fall, to 50 percent of pre-ban levels, forcing even more of what Rajapaksa likely feared most: imports. Food prices generally climbed by 30 percent compared to the year prior. By November 2021, President Rajapaksa’s plantation minister, Ramesh Pathirana, announced a partial reversal of the policy. “We will be importing fertilizers depending on the requirement in the country,” Pathirana told the New York Times. “So far, we don’t have enough chemical fertilizers in the country because we didn’t import them. There is a shortage there.”

Inflation followed. By March 2022, inflation in Sri Lanka was 18.7 percent—the highest in Asia. In April, it was 29.8, then 39.1 in May, and 54.6 percent in June. One estimate says inflation is now hovering at a 112 percent annualized rate. The Sri Lankan rupee has faced near-total collapse, losing 32 percent of its value thus far in 2022, earning it the not-so-coveted superlative of “world’s worst-performing currency.”

Food wasn’t the only thing that became scarce. Bad currency strained fuel and energy supplies as imports became too expensive. The Sri Lankan government even ordered street lights to be turned off in April to save precious energy reserves. Schools canceled exams because they couldn’t afford paper.

Unrest broke out beginning in March, causing President Rajapaksa to declare a state of emergency, permitting police to treat demonstrators and rioters more harshly. Clashes between police and protestors in Rambukkana in mid-April left one dead and ten injured. Hordes of demonstrators gathered outside the offices of the president and prime minister, demanding the Rajapaksa brothers’ resignations. Videos show mutineers attempting to tear down the barricade outside government offices. Prime Minister Mahinda Rajapaksa resigned soon after on May 9, 2022.

President Rajapaksa still held out, however, until protestors stormed the presidential palace, forcing the beleaguered president to flee, first to the Maldives, then to Singapore. He emailed his letter of resignation on Thursday. For now, acting President Ranil Wickremesinghe, who replaced Mahinda Rajapaksa as Sri Lanka’s prime minister in May, holds the reins of power. While he’s been able to get the anti-government protestors to leave the presidential palace, an unnamed spokeswoman for the demonstrators said they “will continue our struggle,” even with the Rajapaksas out of power.

For Sri Lanka’s instability, as a very different prime minister once said, “now this is not the end. It is not even the beginning of the end. But it is, perhaps, the end of the beginning.”