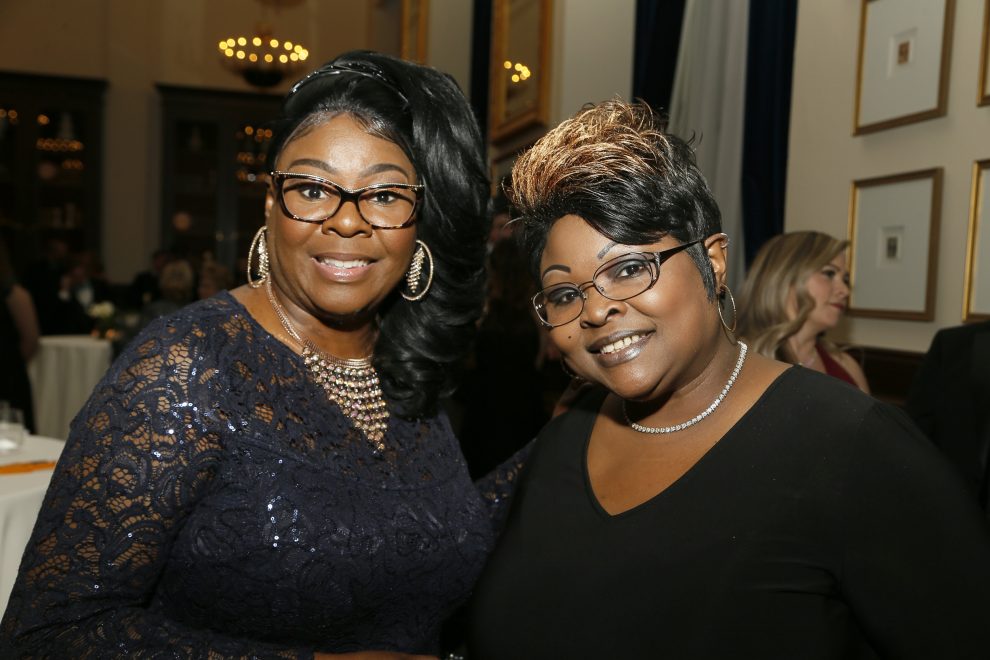 Rochelle Richardson, aka “Silk” from the conservative commentary duo Diamond and Silk, may have lost her sister “Diamond,” but she has not lost the feisty spirit the two embodied together.

And now she’s challenging the media to do some digging as to why Americans like her sister keep dropping dead.

During a celebration of Hardaway’s life in Fayetteville on Saturday, Richardson described the moment her sister told her, “I can’t breathe.”

“It was sudden, out of nowhere, and no warning. I got her to the kitchen table, opened up the back door, so that she could get some air. And each breath was less and less and less until her eyes became a stare,” she said during the memorial service.

The Associated Press reported that it obtained a death certificate on Monday that said the cause of Hardaway’s death was “heart disease due to chronic high blood pressure.”

“COVID-19 was not listed as a cause or contributing factor on her death certificate, which was provided to the AP by the Hoke County Register of Deeds and was signed by a local doctor,” the AP report said. “No autopsy was performed.”

On Tuesday, however, Richardson called out the media for chasing what she seems to think is the wrong story.

“To the Media. Instead of emailing me about my sister’s death, use your investigative journalism skills to investigate why Americans are Falling Dead Suddenly!” she said on Twitter.

“Here’s some tips,” Richardson said. “Start with Dr Fauci, the Gain of Function Research, Spike Proteins and the Wuhun Lab in China.”

To the Media.
Instead of emailing me about my sister's death, use your investigative journalism skills to investigate why Americans are Falling Dead Suddenly!

Start with Dr Fauci, the Gain of Function Research, Spike Proteins and the Wuhun Lab in China.

“Gain of function” research is a “controversial form of study that involves boosting the infectivity and lethality of a pathogen,” according to PolitiFact.

There is disagreement over whether research funded by the National Institutes of Health at a Wuhan, China, laboratory a stone’s throw away from where the COVID-19 pandemic broke out falls under the definition of “gain of function.”

Meanwhile, Richardson’s reference to “spike proteins” hints at her skepticism as to the safety of the COVID-19 vaccines.

“But what I want to say to everybody is don’t you dare call me a conspiracy theorist because I saw it happen,” she said during her sister’s memorial service. “I saw how it happened. I was there when it happened. And it happened suddenly.

“I want America to wake up and pay attention. Something ain’t right. It’s time to investigate what’s really going on here and get some answers to why are people falling dead suddenly.”

Richardson strongly suggested that vaccinated and unvaccinated people alike are being “poisoned” for the sake of population control.

“Many call it a conspiracy theory,” she continued. “I call it murder.”

Are Americans being Poisoned? pic.twitter.com/qYDTofOJk0

While her views might seem outlandish, they are shared by many Americans. Any investigative journalist who takes up her challenge need only follow the facts.

We sure as heck can’t gloss over the fact that we’re seeing a multitude of stories about seemingly healthy young people dying suddenly without explanation.

Sports commentator and OutKick founder Clay Travis has noticed the phenomenon among elite athletes — I’m betting you have, too — and wondered whether the vaccine is to blame.

“In the world of sports, we need deep-dive investigations into whether the COVID shot is leading to more deaths of young, otherwise healthy people,” Travis said last week.

He pointed to the Jan. 2 on-field collapse of Buffalo Bills safety Damar Hamlin during “Monday Night Football” and the Jan. 9 death of 21-year-old Air Force Academy offensive lineman Hunter Brown, who collapsed on his way to class.

“Now, I have been writing and talking about sports for 20 years, nearly,” Travis also said. “I don’t remember stories like this happening.”

“I don’t remember stories about athletes walking on college campuses and suddenly dropping … But the number of high school, college, even pro athletes who are suddenly just dropping all around the world seems to be a fairly substantial trend,” he said.

I don’t remember this ever happening before, either.

Travis noted, as must we, that despite the frequency of these incidents, they are just anecdotal.

But anecdotal evidence is still evidence, and it should be enough to prompt further digging to get to the truth.